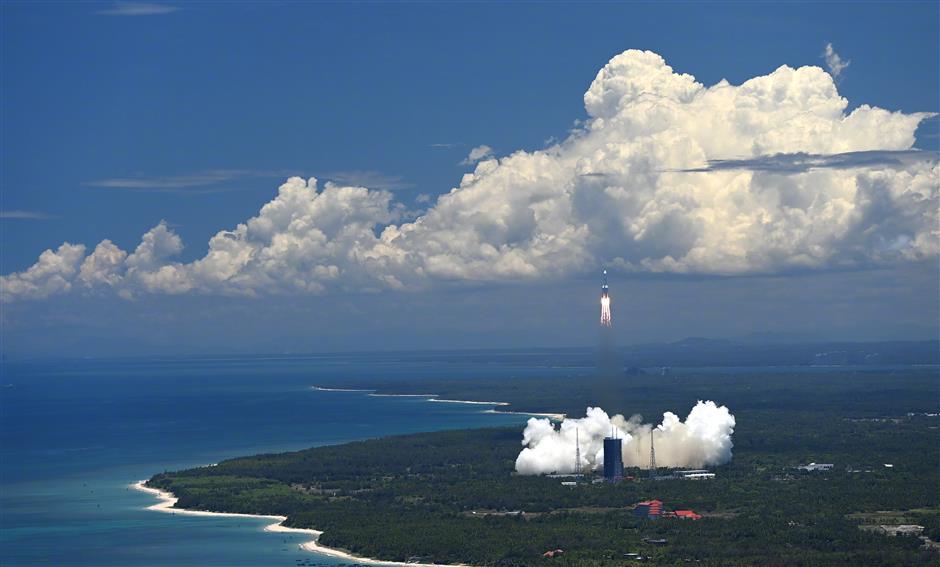 With the carrier rocket Long March-5 lifting off from the Wenchang Spacecraft Launch Site on Thursday, China's Mars probe Tianwen-1 has embarked on its maiden voyage to brave the challenge of orbiting, landing and deploying a rover on the red planet in one single mission.

"Tianwen," the name of China's Martian exploration project, comes from the long poem "Tianwen," meaning Heavenly Questions or Questions to Heaven, written by one of the greatest poets in ancient China.

The triple-task expedition of Tianwen-1 marks another milestone in China's aerospace science and technology development, as well as a fresh daring adventure in the country's long march of outer space exploration following its lunar program and the endeavor to build a space station.

Looking up into the starlit sky, the human race has had a long-standing obsession with Mars. It is now widely known that Mars and Earth, both with warm temperatures, thick and wet atmospheres around the surface, are like twin brothers who have grown apart. Scientists always have a strong interest in exploring this planetary sibling to discover secrets of the origin of life, and decode more mysteries of the vast universe.

Every 26 months, Mars reaches the closest point to Earth in its orbit, opening up a launch window that will allow spacecraft to complete this interplanetary voyage with the least amount of fuel. Recent weeks fall in the latest window.

So far, three countries — the United Arab Emirates, China and the United States — have either launched or prepared to send up unmanned spacecraft to the planet more than 55 million km away.

Since mankind's first trial to launch a Mars probe in 1960, a total of 15 landing missions have successfully entered the atmosphere of the planet, but only eight missions have finally landed and carried out exploration work. Thus, Mars has become a "probe cemetery" due to a failure rate as high as nearly 50 percent. If China can succeed this time, it will join the rank of the world's pioneering Martian explorers.

China's march to Mars has been closely followed around the world. While many expect China to succeed, some are seeking to distort its purpose of developing space science and technology, demonizing the country's exploration programs as a display of ambition to challenge America's leadership in space, and to conquer what many call the final frontier of humanity.

That zero-sum mentality belongs to the Cold War era when the United States and the Soviet Union were locked in a you-win-I-lose space race, but does not fit in with this age when outer space exploration ought to be about pooling global talents and resources for the benefit of the entire human race.

China's steadfast commitments to space probes and the development of the related science and technologies are not only aimed at lifting its own capacity to go deeper into space, but also at serving the progress of all mankind.

As China strives to explore the heavens, it has shared with the international community the scientific findings during its lunar exploration, and provided free satellite navigation services to global users via its Beidou global positioning system. It has also invited UN member states to conduct scientific experiments aboard the China space station, which is expected to be completed around 2022. In stark contrast, the US Congress legislated in 2011 to ban any form of space cooperation with China.

With an explosion of human population, declining natural resources and a daunting global challenge of climate change on Earth, the ultimate goal of space exploration to planets like Mars is to secure the longer-term survival and development of mankind.

Therefore, outer space should not be allowed to become a new battleground for another Cold War, but a whole new frontier where all can work together for the better future of the human race. Zero summers in countries like the United States should abandon their confrontational attitude, and contribute to an open and inclusive international space cooperation.

In the sci-fi movie "The Martian," Mark Watney, a botanist who is trapped on Mars, eventually returns to Earth under joint rescue operation by China and the United States; in another film "The Wandering Earth," people of all colors and nationalities work together and save Earth.

That message of cooperation conveyed in those motion pictures echoes the ideal of China's space enterprise, and should be the very spirit that guides humanity's space endeavor for their better, shared future.