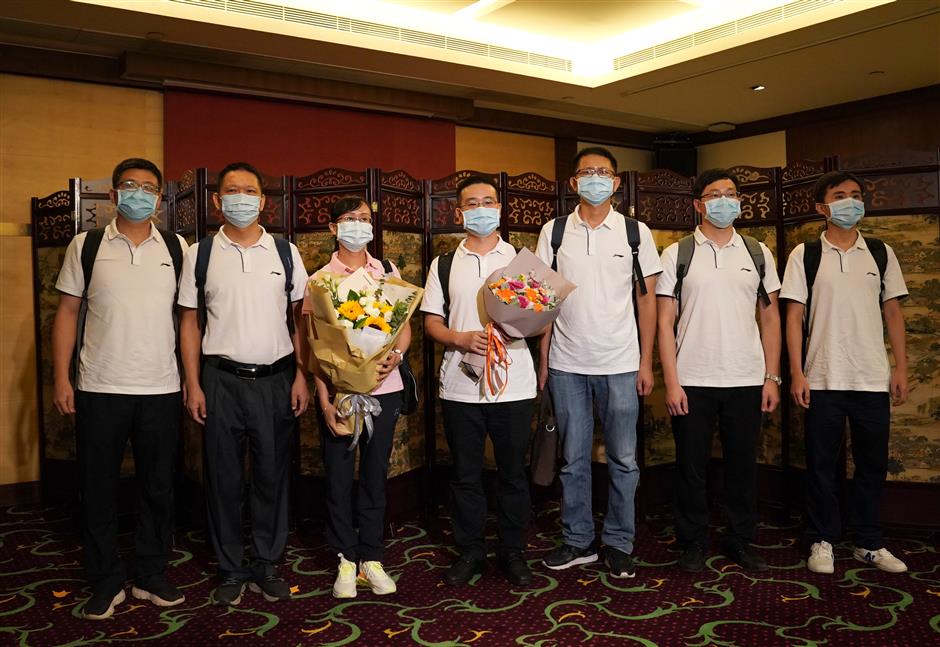 Virus testing professionals from the Chinese mainland pose for a group photo on their arrival in Hong Kong on Sunday.

Seven virus testing professionals from the Chinese mainland arrived in Hong Kong on Sunday as the first batch of mainland supportive teams to help tackle a worsening spread of COVID-19.

The medical professionals, who will help with laboratory work, are members of a 60-strong nucleic acid testing team established recently at the request of the Hong Kong Special Administrative Region government for assistance in the battle against the epidemic.

Members of the team were selected from over 20 public hospitals in Guangdong Province. The head of the team used to lead the province’s supportive group in Wuhan, the capital of Hubei Province.

Guo Penghao, leader of the advance team, said they will start working with relevant departments and familiarizing themselves with testing facilities and procedures in preparation for the following large-scale nucleic acid testing.

The virus testing team and Hong Kong residents will win the battle against COVID-19, Guo said. “We are full of confidence.”

The National Health Commission promised continued efforts to mobilize medical resources from the mainland and send more support at any time based on the requirements of the HKSAR to combat COVID-19.

They came at a time of surging COVID-19 infections in Hong Kong, where medical resources were stretched to the limit and the virus testing capacity was not enough.

All of the newly reported cases are local infections, bringing Hong Kong’s total number of confirmed COVID-19 cases to 3,511.

Among the 115 cases, 79 cases are related to previously confirmed cases, while the sources of other 36 cases remained unknown, said Chuang Shuk-kwan, head of the CHP’s Communicable Disease Branch.

As of 9am on Sunday, 1,107 confirmed patients are hospitalized, including 34 in critical condition and 71 in serious condition. The number of deaths from COVID-19 rose to 34.

Hong Kong has introduced a raft of measures including restricting gatherings to two people and mandating face masks in all outdoor public spaces. Chief executive Carrie Lam on Friday announced the postponement of the 2020 Legislative Council General Election by one year due to the current outbreak.