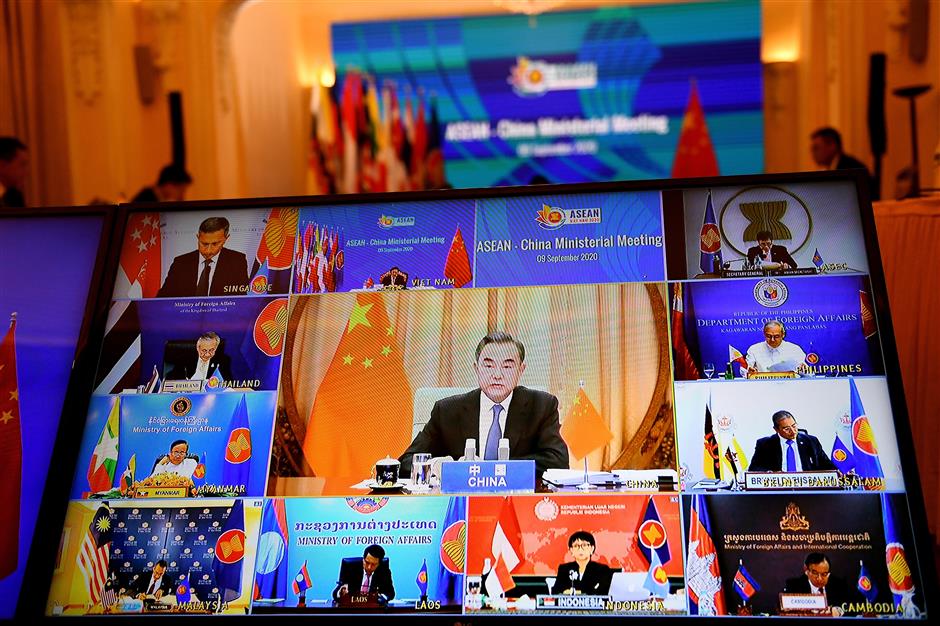 China's Foreign Minister Wang Yi (center on screen) addresses counterparts from the Association of Southeast Asian Nations countries in a live video conference during the ASEAN-CHINA Ministerial Meeting, held online due to the COVID-19 novel coronavirus pandemic, in Hanoi on September 9, 2020.

The United States is becoming the biggest driver of militarization of the South China Sea and the most dangerous factor damaging peace in the area, Chinese State Councilor and Foreign Minister Wang Yi said on Wednesday.

He said that the United States has directly intervened in territorial and maritime disputes in the region out of its own political needs, constantly flaunting its force and strengthening its military deployment.

"The United States is becoming the biggest driver of militarization of the South China Sea," he said.

The United States has interfered with the efforts of China and Association of Southeast Asian Nations (ASEAN) countries to resolve disputes through consultation, as well as provoking confrontation between countries in the region.

"The United States is becoming the most dangerous factor damaging peace in the South China Sea," said Wang.

"Peace and stability are China's greatest strategic interest in the South China Sea," Wang said, adding that it is also the common strategic aspiration of China and ASEAN countries.

"China hopes that countries outside the region, including the United States, will fully respect the wishes and expectations of countries in the region, instead of creating tension and seeking profit from it."

Wang stated three fundamental facts in response to smears made by the US on China's position on the South China Sea issue.

First, China has sufficient historical and legal basis for sovereignty over the islands in the South China Sea.

Second, China always adheres to the policy of good-neighborliness and friendship and has been committed to playing a constructive role on the South China Sea issue.

Third, China has always been committed to complying with international laws including the United Nations (UN) Convention on the Law of the Sea.

When talking about the Hong Kong issue, Wang said that it is China's internal affairs, adding that non-interference in internal affairs is the basic norm of international relations and an important provision of the UN Charter. All countries are obliged to abide by it.

"The East Asia Summit is a strategic forum led by leaders of all countries. It has never been a place to intervene in the internal affairs of other countries, let alone an arena for attacking other countries' political systems," Wang said.

This year marks the 15th anniversary of the establishment of the East Asia Summit, Wang said, adding that the most urgent task of the summit is to gather consensus in fighting the COVID-19 pandemic, promote the revival of economic cooperation, and maintain the overall situation of regional peace and development.

He called for providing new impetus to the fight against the pandemic, supporting the World Health Organization (WHO), and jointly building a regional "anti-pandemic firewall."

He called for launching new measures for economic recovery and striving to make East Asia a source of stable growth for the world economy in the "post-pandemic era."

He called for promoting the construction of "quick passage" and "green passage" regional networks to ensure the smooth flow of personnel and materials to provide a strong guarantee for regional peace and stability.

China firmly supports ASEAN in playing a leading role in East Asian cooperation, Wang said, adding that the members of the East Asia Summit should comply with the common aspirations of the countries in the region, respect their legitimate demands, adhere to the multilateralism with East Asian characteristics, abide by the basic principles of regional cooperation, and make positive contributions to ensuring the lasting peace, prosperity and development of East Asia.

He also expounded China's position on issues including cross-border water resources cooperation, the Korean Peninsula, and the Rakhine State.

When attending the 21st ASEAN-China, Japan, the Republic of Korea (ROK) (10+3) Foreign Ministers' Meeting on the same day via video link, Wang said that all parties should continue to coordinate the anti-pandemic and developing needs, create a new aspect for cooperation in the post-pandemic era and promote 10+3 cooperation to a new level.

He said that China suggested improving the level of public health governance, continuing to support the WHO in playing an important role in the global fight against the pandemic, and jointly opposing the politicization of the pandemic and the stigmatization of other countries.

The foreign ministers of Japan, ROK and ASEAN countries spoke highly of the results of the 10+3 cooperation and looked forward to signing the Regional Comprehensive Economic Partnership (RCEP) agreement within this year as planned.

All parties agreed that the 10+3 countries should adhere to cooperation in solidarity, openness and inclusiveness, deepen cooperation in public health, economic and trade investment, digital transformation, food security, tourism and other fields, strengthen interconnection, ensure the smooth flow of the industrial chain and supply chain, facilitate personnel exchanges, and work together for regional stability, development and prosperity.