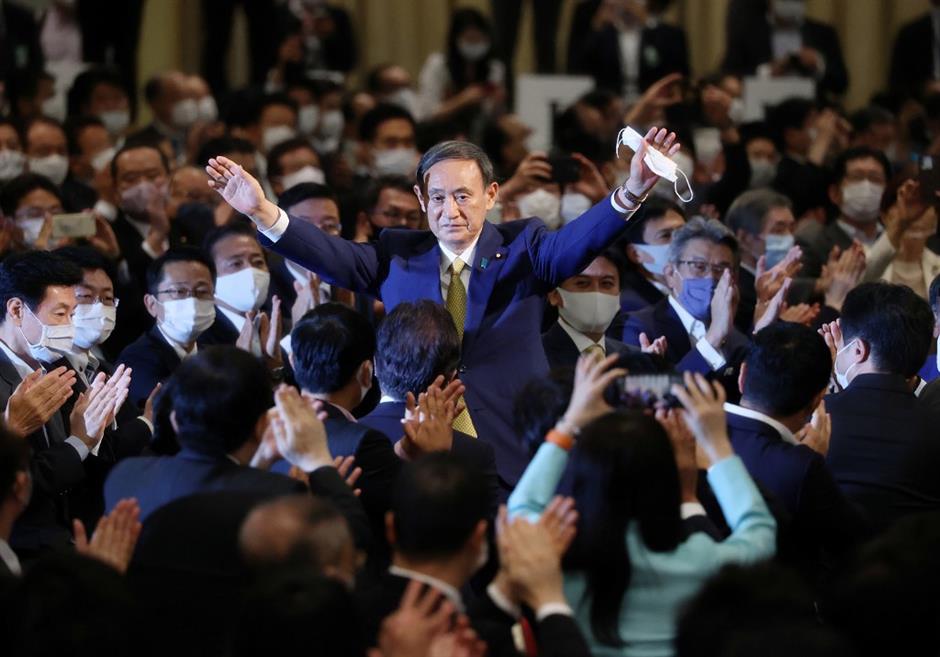 Japan's Chief Cabinet Secretary Yoshihide Suga reacts after he was elected as new head of Japan’s ruling Liberal Democratic Party at the party's leadership election in Tokyo on September 14, 2020. Japan's ruling party on September 14 elected chief cabinet secretary Yoshihide Suga as its new leader, making him all but certain to replace Shinzo Abe as the country's next prime minister.

Most notably, Suga opted to retain the services of LDP heavyweight Toshihiro Nikai in the key post of secretary-general.

Hiroshi Moriyama, another LDP veteran, will stay in his post as Diet Affairs Committee chairperson.

Sources with knowledge of the matter said that both Nikai and Moriyama provided the most support to Suga during his LDP presidential campaign.

Meanwhile, Tsutomu Sato, a former communications minister, has been appointed as General Council Chairperson, the top role in the ruling party's decision making body, while Hakubun Shimomura, a former Education Minister, will remain in his post as Policy Research Council Chairperson.

Seiko Noda and Tamayo Marukawa, two females, were selected as the party's Executive Acting Secretary-General and head of its Public Relations Headquarters, respectively.

Sources said while both extremely capable lawmakers, the move to choose two females may have also been partly to answer critics of the LDP election campaign that saw no female lawmakers enter the race, despite the government's supposed push for more females to be promoted to top roles in business and politics.

Suga filled the key posts in the new-look LDP executive leadership with veteran lawmakers from the five intraparty factions that supported him in his winning leadership race, guaranteeing his place as the nation's next prime minister to be announced at an extraordinary Diet session on Wednesday.

Sources with knowledge of the matter have also said that Suga's new Cabinet, to be officially formed on Wednesday, is taking shape, with Foreign Minister Toshimitsu Motegi and Finance Minister Taro Aso slated to retain their portfolios.

Suga also plans to retain the services of the LDP's junior coalition partner Komeito's Kazuyoshi Akaba, who serves as land minister, and Olympics and Paralympics Minister Seiko Hashimoto will also remain in the Cabinet, the sources said.

Kato would be no stranger to the role having previously served as deputy chief Cabinet secretary under Suga between 2012 and 2015.

Following his election win the previous day, Suga said with reference to his new Cabinet, it will comprise "reform-minded" people.

"I'll create a Cabinet that works for people," Suga said, with reference to reforms and deregulation.

"I want to create a government that people can trust. I will push ahead with deregulation and put an end to ministry sectionalism, endemic vested interests and the practice of blindly following past precedents. I will create a working cabinet," the new LDP chief stated emphatically.