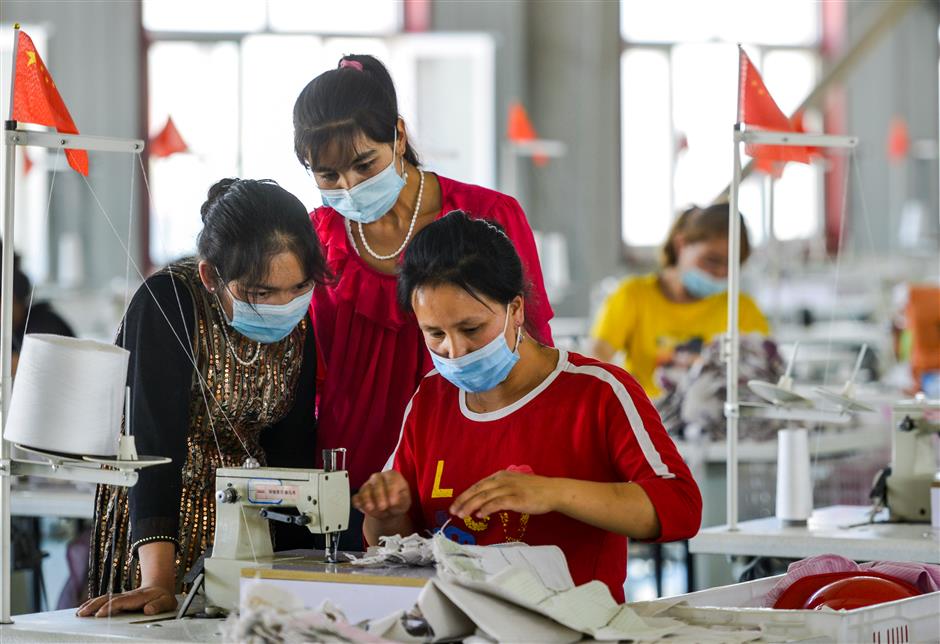 China on Thursday published a white paper on the employment and labor rights in Xinjiang Uygur Autonomous Region.

The white paper, titled "Employment and Labor Rights in Xinjiang," was released by the State Council Information Office.

China is committed to the people-centered philosophy of development, attaches great importance to job security, gives high priority to employment, and pursues a proactive set of policies on employment, the white paper says.

In accordance with the country's major policies on employment and the overall plan for eliminating poverty, the Xinjiang Uygur Autonomous Region takes the facilitation of employment as the most fundamental project for ensuring and improving people's wellbeing, it says.

Especially since the 18th National Congress of the Communist Party of China in 2012, Xinjiang has vigorously implemented employment projects, enhanced vocational training, and expanded employment channels and capacity, the white paper says.

"Through its proactive labor and employment policies, Xinjiang has continuously improved the people's material and cultural lives, and guaranteed and developed their human rights in every field," the white paper says.

From 2014 to 2019, the total number of people employed in Xinjiang rose from 11.35 million to 13.3 million, an increase of 17.2 percent, according to the white paper. The income of residents and workers has increased steadily, says the white paper.

Workers' job preferences have always served as an important reference for the local government of Xinjiang in designing its employment policies, expanding employment channels, creating jobs, organizing vocational training sessions, and providing placement services, according to the white paper.

"This ensures that the people can make their own choices about work and enjoy a happy life," it says.

Xinjiang strictly observes relevant laws and regulations of the state, providing information on the law through education campaigns, strengthening the legal awareness of employers and employees, and conducting routine inspections to ensure that labor laws are enforced, it adds.

"The goal is to bring the establishment, management, supervision and arbitration of labor relations under legal scrutiny, and take resolute action to prevent or punish any incidents of forced labor," the white paper says.

"The Chinese government is committed to respecting citizens' right to work, safeguarding their legitimate labor rights and interests, and ensuring them a decent job," it says.

Strictly following the above principles as embodied in the Constitution of the People's Republic of China and relevant national laws, Xinjiang has formulated and implemented a series of autonomous regional regulations based on local conditions, providing a solid legal guarantee for citizens in Xinjiang to enjoy equal rights to work, it says.

The local government fully respects and guarantees the right of workers of all ethnic groups to freedom of religious belief, and ensures that no organization or individual interferes with this freedom, it says.

"While promoting standard spoken and written Chinese in accordance with the law, Xinjiang fully respects and protects the rights of ethnic minority workers to use their own spoken and written languages, and ensures that workers can choose which languages to use for communication," says the white paper.

The customs of workers of all ethnic groups are fully respected and guaranteed and efforts are made to create a good working and living environment for them, it adds.

Xinjiang implements a proactive employment policy, protects the lawful labor rights and interests of people of all ethnic groups, and strives to provide decent work and a better life for all, it says.

"This embodies the common values that are championed by the international community, and contributes to safeguarding social fairness and justice and promoting the all-round development of humanity," the white paper says.

For years, certain international forces, due to ideological prejudice against China, have been applying double standards in Xinjiang, criticizing "breaches of human rights" while ignoring the tremendous efforts Xinjiang has made to protect human rights. They have fabricated facts to support their false claims of "forced labor" in Xinjiang, and smeared the local government's work on employment and job security, the white paper says.

"Their acts amount to a denial of the fact that the local people in Xinjiang enjoy the right to work, aspire to move out of poverty and backwardness and are working towards that goal," it says.

"Such groundless allegation would be strongly opposed by everyone who values justice and progress," the white paper says.