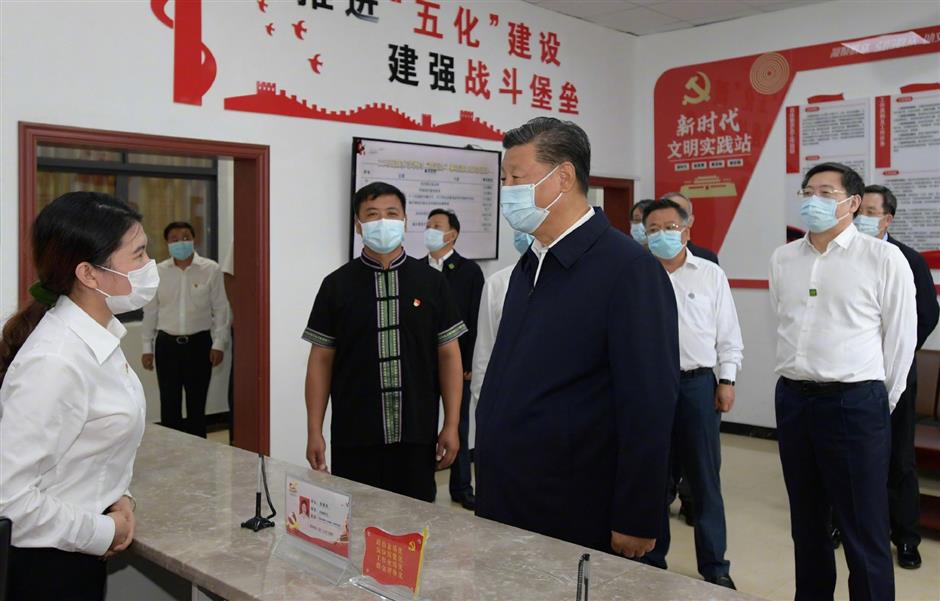 Chinese President Xi Jinping, also general secretary of the Communist Party of China Central Committee and chairman of the Central Military Commission, learns about progress in consolidating poverty eradication at a service center in the village of Shazhou, Rucheng County, central China's Hunan Province, on September 16, 2020.

Xi Jinping, general secretary of the Communist Party of China Central Committee, stressed the effectiveness of primary-level public services while inspecting a village service center in the county of Rucheng, central China's Hunan Province, on Wednesday.

Xi Jinping has encouraged rural primary school students to strive to grow from "saplings" into "towering trees" of the Chinese nation.

Walking into a classroom of fourth-graders at a primary school in the county of Rucheng during his inspection tour in central China's Hunan Province on Wednesday, Xi was delighted to hear the students sharing stories of the legendary Long March undertaken by the Red Army in the 1930s.

He told the students that the revolutionary cause must be passed down from one generation to the next, and that the rejuvenation of the Chinese nation will be realized with the participation of today's young generation.

Xi expected the students to study hard, make progress every day, and be well-prepared to join the socialist cause.

The exhibition chronicles the story of an impoverished villager named Xu Jiexiu, who offered shelter to three female Red Army soldiers during the Long March in the 1930s. Upon the soldiers' departure, they cut their only quilt into two pieces, leaving one part with Xu to show their care.

Thus, the people have come to understand what the CPC-led people's army truly is, Xi said.