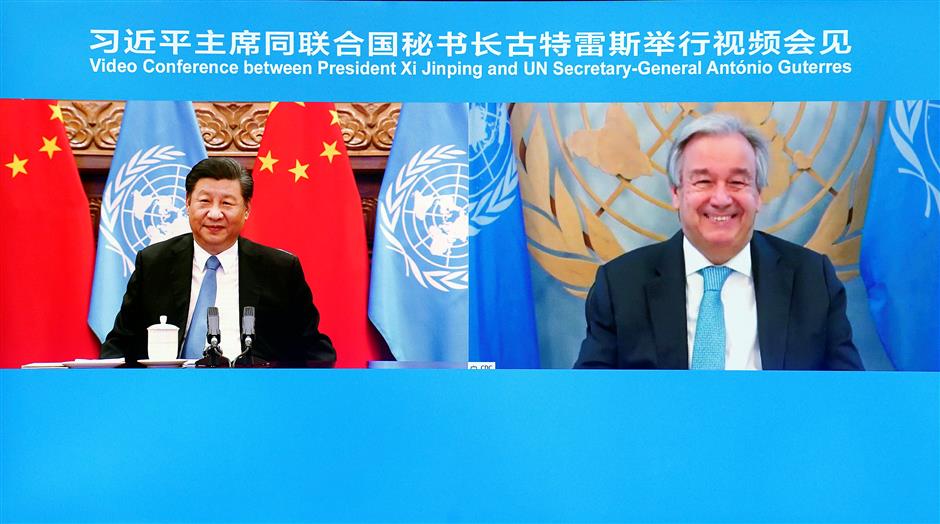 Xi urged the international community to reaffirm their support for multilateralism and abiding commitment to the UN Charter.

Noting that COVID-19 is still ravaging the world, Xi said China firmly supports the key leadership of the UN system, especially the World Health Organization, in battling the pandemic.

The Chinese president said China will honor its commitment to make COVID-19 vaccines a global public good after putting them into use following the completion of vaccine development.

China will contribute to the vaccine accessibility and affordability in developing countries, Xi said.

Noting the emergence of many new problems amid the pandemic, Xi said these problems are in a way or another related to peace and development.

Pursuing unilateralism and seeking hegemony are unpopular and will surely be rejected, he added.

Xi said the COVID-19 pandemic has magnified the problems of maladaptation and mismatch in the global governance system. However, all parties should think about how to improve it, instead of tearing it down and setting up another one.

In the world, there is only one system, namely the UN-centered international system, and only one set of rules — the basic norms of international relations based on the UN Charter, Xi said.

He also said China will not sit idly by and allow its national sovereignty, dignity and development space to be undermined. Instead, China will firmly safeguard its legitimate rights and interests and uphold international equity and justice.

The Chinese president called on all countries to rise above differences between countries, nationalities, cultures and ideologies to promote building a community with a shared future for humanity.

During the videoconference, Guterres expressed his gratitude over China's consistent and firm support for multilateralism and the UN.

Guterres highly commended a series of important initiatives and measures Xi announced at the UN General Assembly in spheres of practicing multilateralism, coping with climate change and promoting sustainable development.

He also expressed his support for China's efforts to push for jointly building a Silk Road of Green Development.