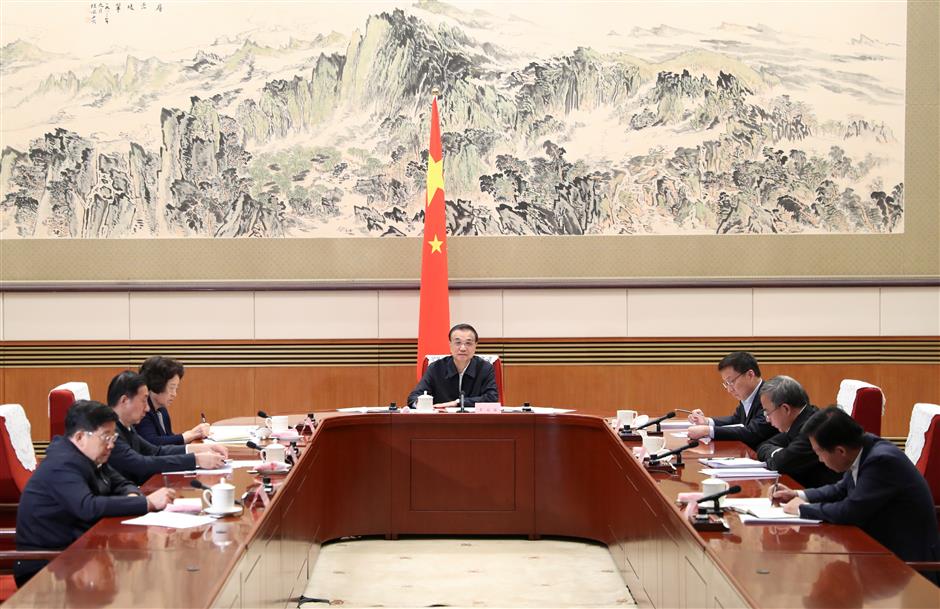 Chinese Premier Li Keqiang, also a member of the Standing Committee of the Political Bureau of the Communist Party of China Central Committee, presides over a symposium on economic situation via video link in Beijing, capital of China, on October 12, 2020.

Chinese Premier Li Keqiang on Monday called for efforts to consolidate the momentum of steady economic recovery and growth, as well as to ensure the fulfillment of this year's development goals.

Li, also a member of the Standing Committee of the Political Bureau of the Communist Party of China Central Committee, made the remarks while presiding over a symposium on the economic situation via video link.

Vice-Premier Han Zheng, also a member of the Standing Committee of the Political Bureau of the CPC Central Committee, attended the symposium.

A raft of government policy measures, especially tax and fee reductions, have extended the economic recovery in the past few months, while speedy growth of new market entities helped expand employment, according to reports delivered by governors of Liaoning, Jiangsu, Fujian, Jiangxi and Shaanxi at the symposium.

Noting that the domestic and external environment is still complex and uncertainties are on the rise, Li urged both confidence and profound analysis of difficult problems in carrying forward the momentum of steady economic recovery and growth.

Li called for efforts to address development challenges by reforms and opening-up, clinch a decisive victory in the fight against poverty, and realize economic growth for the year.

Tax and fee reductions, which are key to steady economic recovery, should be further implemented in the remaining months, said Li, emphasizing that funds should be channeled to market entities in full.

Coverage of inclusive finance should be expanded to extend effective financial services to micro, small and medium-sized firms, as well as struggling sectors.

Local government should rev up the integration of online and offline consumption, promote the coordinated growth of new and traditional consumption and fuel economic growth with consumption potential, Li said.

He also underlined the importance of deepening the reforms of streamlining administrative approvals, delegating power to lower levels and improving regulations and services to spawn and nurture new market entities, as well as to enhance the resilience and vitality of the economy.

In the meantime, Li stressed securing people's basic livelihoods and advancing the employment of college graduates, migrant workers and other key groups.