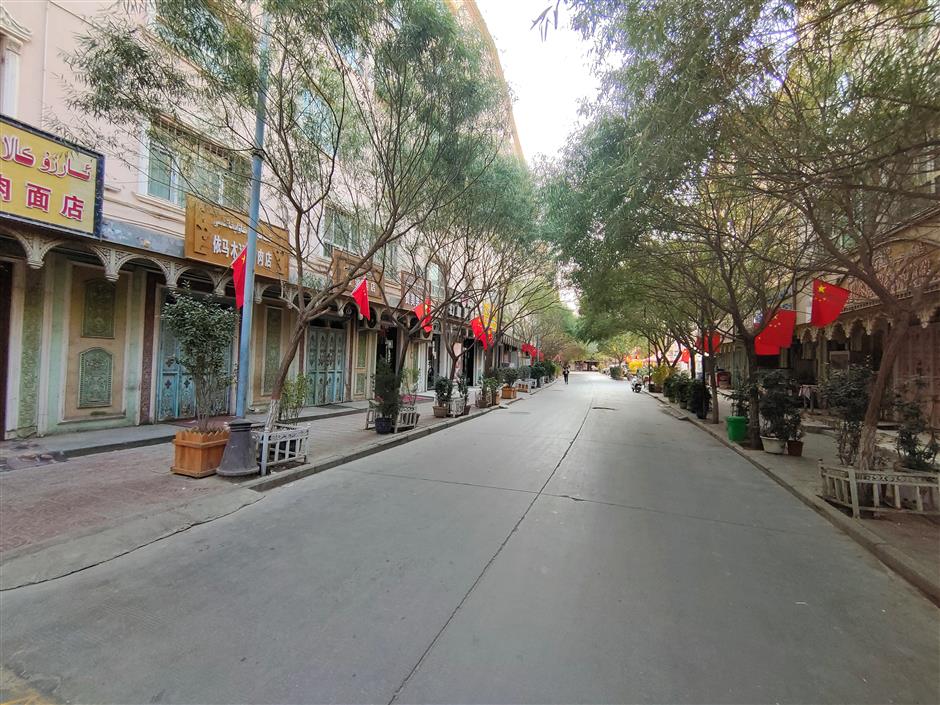 A street in Kashgar, Xinjiang Uygur Autonomous Region, is seen deserted on October 27, 2020.

Northwest China's Xinjiang Uygur Autonomous Region is dealing with a new COVID-19 outbreak in its southern prefecture of Kashgar. This is the third round of the epidemic this year in the far west region.

Xinjiang had a total of 22 existing confirmed cases and 161 asymptomatic ones as of Tuesday, all in Kashgar's Shufu County, the regional health commission said on Wednesday.

After tackling two rounds of epidemic outbreaks and equipped with the country's tried and true emergency response tips, Xinjiang is responding to the latest epidemic with speed and sophistication.

The new alarm was sounded Saturday when one asymptomatic COVID-19 case was reported in Kashgar.

The new case, a 17-year-old female villager from Shufu County, tested positive for the virus during the county's routine nucleic acid testing, a measure introduced in August in Xinjiang to improve COVID-19 alert timeliness.

The local government and Xinjiang at large launched emergency responses immediately, with medical teams and work teams in and outside of Xinjiang sent to the county and the prefecture for support.

All close contacts have been quarantined for medical observation. Massive nucleic acid tests are being taken. An epidemiological investigation into the case has been launched.

"We have been racing against time," said Kasmu Ehet, a medical worker in Shufu who stayed up late to conduct nucleic acid tests. "Every second counts in stemming the spread of the virus."

By 5 pm Tuesday, Kashgar had finished nucleic acid testing for everyone in the prefecture, where some 4.74 million people have been tested in about four days.

For those in Shufu, the sudden virus outbreak has left many quarantined at home, but sufficient daily supplies and targeted support remain in place.

Community workers work around the clock in the Tuanjielu Community in Shufu's Tokzak Township, one of the four high-risk areas, to serve the community's some 4,500 residents, delivering food and offering medical care, among others.

"There are delivery stops in our communities, and we have a sound mechanism and competent volunteers to deal with orders from residents," said Wang Lijun, a community worker in Tokzak.

The three largest vegetable wholesale markets in Kashgar have nearly 3,000 tons of stocks while supplies of other food are also enough to meet the whole prefecture's demand. In Kashgar City, most of its supermarkets and grocery stores stay open as usual.

The prefecture has launched a 24-hour hotline to heed the demands and suggestions of people in Kashgar.

"Of course it doesn't feel good to be 'trapped' at home, but at least you never have to worry about starving yourself," Shufu resident Akbar told Xinhua via cellphone. "Joint efforts and cooperation will help end the stay-at-home days earlier."

So far, all the asymptomatic and confirmed COVID-19 cases are in the county. For residents in other parts of Xinjiang, life and work go on generally as usual with necessary epidemic control measures in place.

Residents in Hotan, a prefecture neighboring Kashgar Prefecture, are also taking tests to screen for the virus. People wearing masks take strolls at parks while restaurants are busy catering to diners.

In southeast Xinjiang's Ruoqiang and Qiemo counties, farmers are harvesting ripe Chinese dates, a nutritious dried fruit that serves as an important income source for locals.

Major infrastructure projects such as the city Olympic center are underway in Xinjiang's capital Urumqi, with workers going through disinfection steps before getting down to business.

The new outbreak came at one of the popular tourism seasons for Xinjiang. Air and railway services remain open in Kashgar and Xinjiang at large, and a specific team has been set up to arrange nucleic acid tests for exiting passengers based on their schedules.

A topic about the large size of Xinjiang has gone viral in recent days on China's Twitter-like social media Weibo, reassuring visitors in Xinjiang about the limited contagion risks outside Kashgar. Many microbloggers shared their traveling experiences or willingness to visit the region after the outbreak ends.

"Xinjiang is so large that you can just take necessary prevention measures, relax and have fun. Come on, Kashgar!" said a microblogger named Jianyuan.