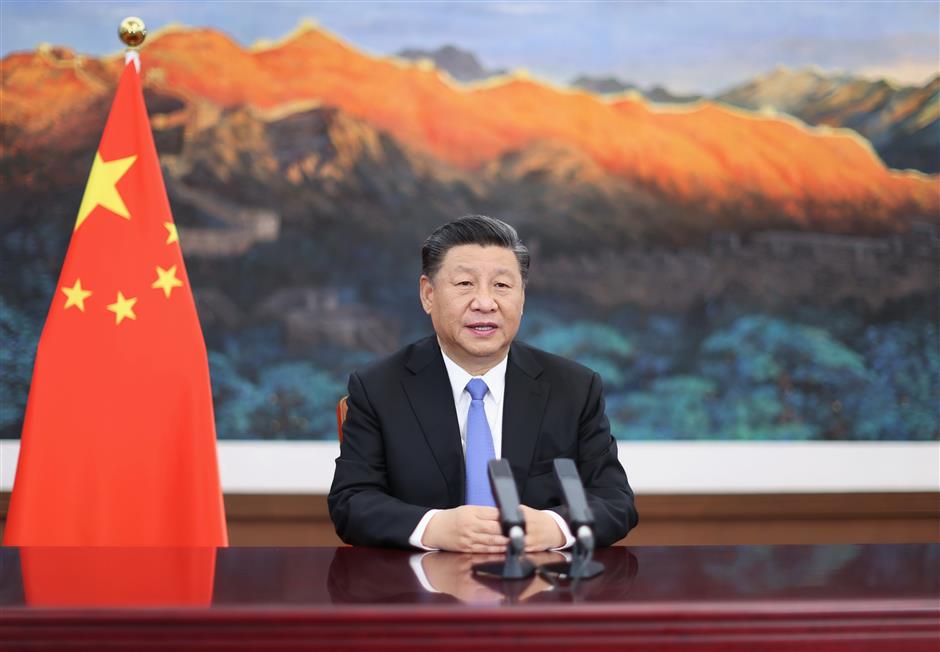 Chinese President Xi Jinping delivers a keynote speech via video at the opening ceremony of the third China International Import Expo held in Shanghai on Wednesday.

Chinese President Xi Jinping gave another shot in the arm to the China International Import Expo (CIIE), a major platform he initiated to bolster global trade, by announcing a fresh round of opening-up measures Wednesday.

"Our aim is to turn the China market into a market for the world, a market shared by all, and a market accessible to all," Xi said while delivering a keynote speech via video at the opening ceremony of the third CIIE that was convened as scheduled following the country's successful containment of COVID-19.

He said the country will continue to leverage the pioneering role of pilot free trade zones and free trade ports in steering opening up, introduce a negative list for cross-border services trade and open still wider in areas like the digital economy and the internet.

The catalog of technologies prohibited or restricted from import will be shortened, foreign-related legal framework will be more open and transparent, and intellectual property protection will be strengthened, according to Xi.

He said China stands ready to sign high-standard free trade agreements with more countries, and will work with related countries to promote high-quality Belt and Road cooperation and build a community with a shared future for mankind.

Notwithstanding COVID-19, China's pace of opening up has not been hindered but quickened. The items on the national negative list for foreign investment have been cut from 40 to 33 and the number of pilot FTZs has increased from 18 to 21. 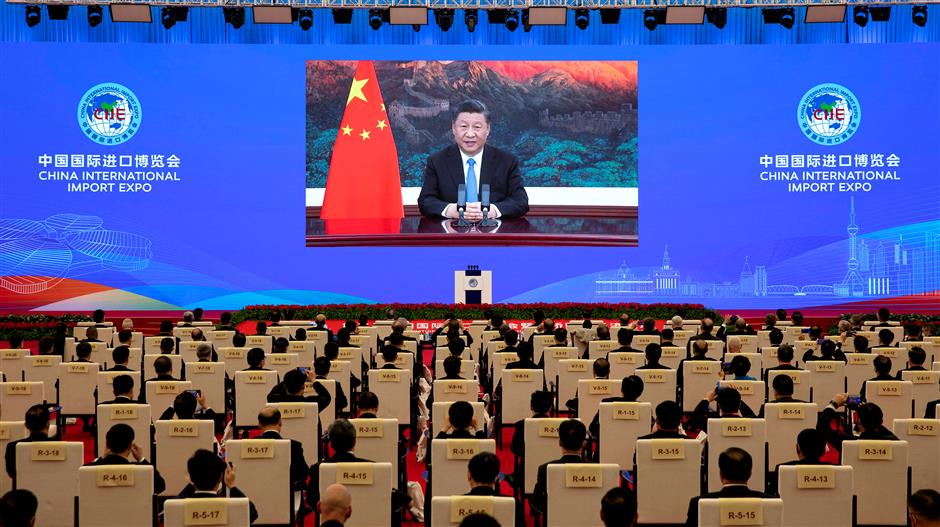 Chinese President Xi Jinping delivers a keynote speech via video at the opening ceremony of the third China International Import Expo held in Shanghai on Wednesday.

At a time when the pandemic adds more uncertainties and challenges to global economy, convening the import expo offline as scheduled sheds light on China's major strategic achievements in containing COVID-19 as well as its economic resilience.

China is the first major economy to return to growth from the economic fallout of the COVID-19 epidemic with its economy expanding 0.7 percent year on year in the first nine months.

In the same period, the country's foreign trade of goods totaled 23.12 trillion yuan (about 3.46 trillion U.S. dollars), up 0.7 percent year on year, and paid-in foreign investment rose 5.2 percent from a year earlier.

This year, multinational companies gravitate toward the week-long expo as a vote of confidence in Chinese economy, with a lot of them becoming regulars of the annual event.

With the number of visitors expected to reach 400,000 -- the figure could be higher without restriction measures for virus containment -- this year's expo is believed to be one of the largest events across the world in 2020.

"China will be probably one of the only countries in the world where the market will be still growing," said Jean-Paul Agon, CEO of L'Oreal, who added that the conglomerate's sales on the Chinese mainland grew by 30 percent in the second quarter.

Agon said L'Oreal is improving its performance in e-commerce in the rest of the world thanks to what it has learned in China.

With a total population of 1.4 billion and a middle-income group that exceeds 400 million, China has a tremendously huge market that is most promising in the world. The country's goods import is estimated to top 22 trillion dollars in the coming decade.

The expo, designed by Xi, is the world's first import expo held at the national level, an innovation in the history of global trade.

Since its debut, the platform for international procurement, investment promotion, cultural exchange, and open cooperation has now evolved into an international public good for the world.

The inaugural expo in 2018 drew more than 3,600 exhibitors from 172 countries, regions and international organizations, and attracted more than 400,000 buyers, who agreed on some 57.83 billion dollars of intended deals in six days.

The second expo was attended by exhibitors from a total of 181 countries, regions and international organizations, and attracted more than 3,800 enterprises who reached 71.13 billion dollars worth of tentative deals for one-year purchases of goods and services.

Cecilia Qi, vice president and general manager of Pharma and Vaccines, GSK China, said CIIE provides China with a platform to embrace openness and showcase innovative results, and also brings opportunities for mutual benefits and inclusiveness to the world.

The CIIE has generated "spillover effect" that keeps accelerating the reception of many innovative products in China, she said.

Jerry Zhang, executive vice chairman and CEO of Standard Chartered Bank (China) Limited, said "China is transforming from a large trading country to a trading powerhouse, and has become an important engine of economic globalization and a stabilizing factor in international trade."