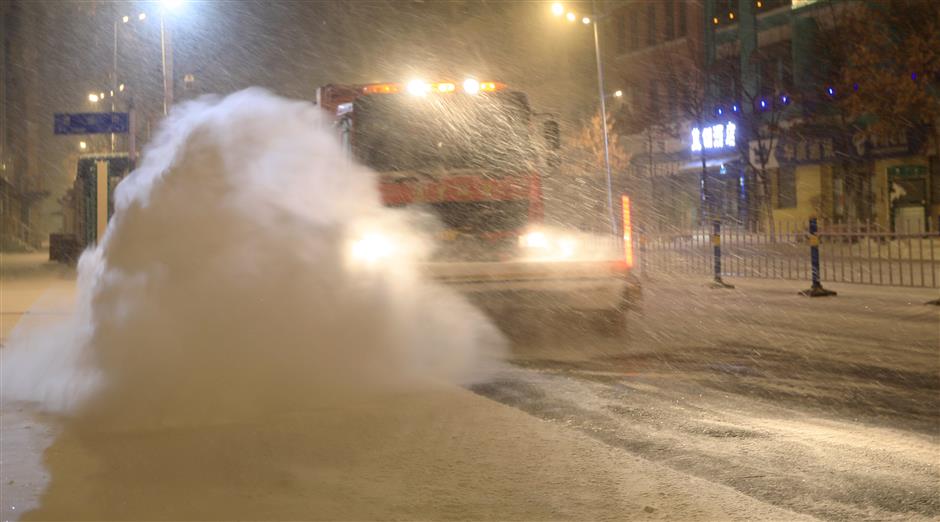 A cleaning truck removes snow from a street in Harbin, Heilongjiang Province, on November 19, 2020.

Snowstorms in China's northernmost province of Heilongjiang have grounded more than 100 flights and forced expressways and schools to be closed, local authorities said on Thursday.

The province's meteorological center has issued a red alert for heavy snow, the highest in China's weather warning system, and upgraded the emergency response to the second-highest level.

Snowfall of up to 25.8 mm was recorded in cities including Harbin and Mudanjiang, bringing a blanket of snow 17 cm deep in some places, according to the center.

Educational authorities in Harbin, the provincial capital of Heilongjiang, said primary and middle schools and kindergartens in the city would be closed on Thursday due to heavy snowfall.

Harbin Taiping International Airport said 187 flights scheduled for Thursday had been canceled as of 11am Traffic authorities said more than 10 expressways were closed.

To cope with the disruptions to road and air traffic, China Railway Harbin Group said it would increase the number of trains to add 75,000 seats and mobilize workers to de-ice rail tracks to ensure safety.

The provincial meteorological service has predicted snowstorms on Thursday in cities including Harbin, Qitaihe, Jixi and Mudanjiang and warned of icy roads.