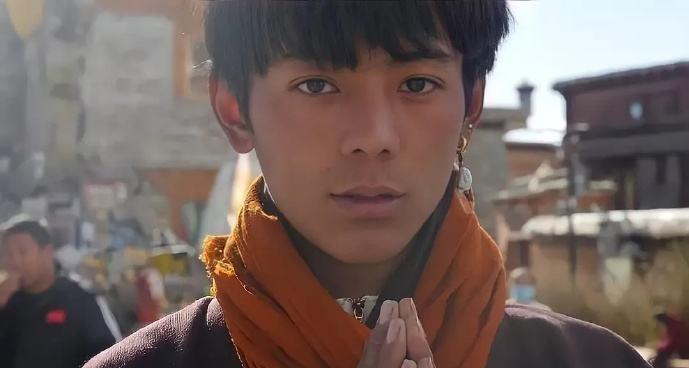 Tamdrin was spotted and videotaped by a photographer in his hometown in Litang County, Tibetan Autonomous Prefecture of Garze, southwest China's Sichuan Province. The seven-second video garnered nearly 3 million "likes" on Douyin, the Chinese version of video-sharing platform TikTok, in less than three weeks.

Meanwhile, "Ding Zhen," Tamdrin's name in Mandarin, continues to trend on Sina Weibo, the Chinese equivalent of Twitter. People also got to know him as more videos came out, in which he used stumbling Mandarin to introduce himself and express his affection toward his chubby pony "Pearl," and the animal has gained over 80,000 followers on its own Weibo account.

Being "wild, sweet and pure," as his fans described, Tamdrin stands out from most internet celebrities for his innocence, the traditional Tibetan costumes he wears and the breathtaking views of his hometown in the background of the videos.

Sensing Tamdrin's soaring popularity, the local government invited him to be the tourism ambassador of Litang County just days after his first video went viral. He was also hired by a local culture and tourism promotion company for a monthly salary of 3,500 yuan (US$532).

Dubbed "the city in the sky," Litang is located over 4,000 meters above sea level and 654km from Chengdu, the provincial capital. In the Tibetan language, Litang means "flat grasslands like bronze mirrors."

The county, with a population of some 73,000, just shook off poverty in February. Compared with its neighboring Daocheng County, Litang's tourism has not been robust, though its views are no less impressive, according to local authorities. Tamdrin's overnight fame gives the local government a boost to develop local tourism.

With his new title, Tamdrin appeared in a three-minute promotional video that came out last week in which he showed audiences his life of herding yaks beside the snowy Geyen Mountain, racing horses in endless meadows, praying in temples and singing love songs with his friends around a bonfire.

"The world is big, but I love my hometown the most," he said in the monologue.

"The sincerity of Tamdrin and the beauty of Litang soothe our anxious minds," read a comment below the video on Douyin.

Many netizens are seriously considering a tour to Litang. According to a recent report of Trip.com, China's major online tourism company, the search volume of "Litang" increased over six-fold in the 10 days after Nov. 20, four times more than during the National Day Holiday in October.

The interest was shown both in and outside Sichuan, making Litang a possible tourism hotspot during the upcoming New Year holiday, according to Trip.com.

More and more travel websites have published articles introducing travel routes to Litang, hotels to stay in and places to visit there.

Interestingly, some careless fans originally thought Tamdrin's hometown was in the Tibet Autonomous Region and expressed their wish to travel there, which prompted Sichuan's media groups and tourism department to demonstrate the fact on Weibo that Tamdrin belongs to them.

However, their counterparts in Tibet took the chance to promote the region's own tourism resources and invited Tamdrin to its capital Lhasa, a place he had expressed hope to visit one day in an interview.

Over the weekend, more provinces and autonomous regions around China, including Qinghai, Gansu, Shandong and Zhejiang, joined the rivalry for Tamdrin's visit as well as tourists' attention by showing their sceneries on Weibo.

"I hope Tamdrin could grow together with Litang's tourism industry," he said.

Tamdrin is happy with all the invitations and the fact that he could help promote his hometown to more people. He will be a qualified tourism ambassador, but has no intention to become a star as many other internet celebrities did, he told Xinhua.

As he said in the promotional video, his dream is to keep the title of "the prince on the horseback" given by his friends in Litang and win every race.

"I just want to ride my pony over the mountains and hills," he said.