Chang'e-5 probe takes off after collecting samples from moon

Chang’e-5 carrying the country’s first lunar samples blasted off from the moon late on Thursday, the China National Space Administration announced. It is the first-ever Chinese spacecraft to take off from an extraterrestrial body.

Chang’e-5 probe, comprising an orbiter, a lander, an ascender and a returner, was launched on November 24, and its lander-ascender combination touched down on the north of the Mons Rumker in Oceanus Procellarum, also known as the Ocean of Storms, on the near side of the moon on Tuesday.

After the samples were collected and sealed, the ascender of Chang’e-5 took off from the lunar surface, and is expected to complete unmanned rendezvous and docking with the orbiter-returner in lunar orbit, an unprecedented feat.

The sample collection was completed after 19 hours at 10pm on Wednesday, and the samples were stowed in a container inside the ascender of the probe as planned, the space agency said. China had planned to collect the samples over a period of about two days, with the entire mission taking around 23 days.

By using data sent back by the probe, researchers simulated the sampling procedure in a lab, providing an important basis for the operation on the moon. The lunar regolith penetrating radar and other payloads installed on the lander have carried out scientific exploration as planned and provided information support for sampling.

Chang’e is equipped to both scoop samples from the surface with a robotic arm and drill 2 meters to retrieve materials that could provide clues of the moon’s origins, formation and volcanic activity on its surface. 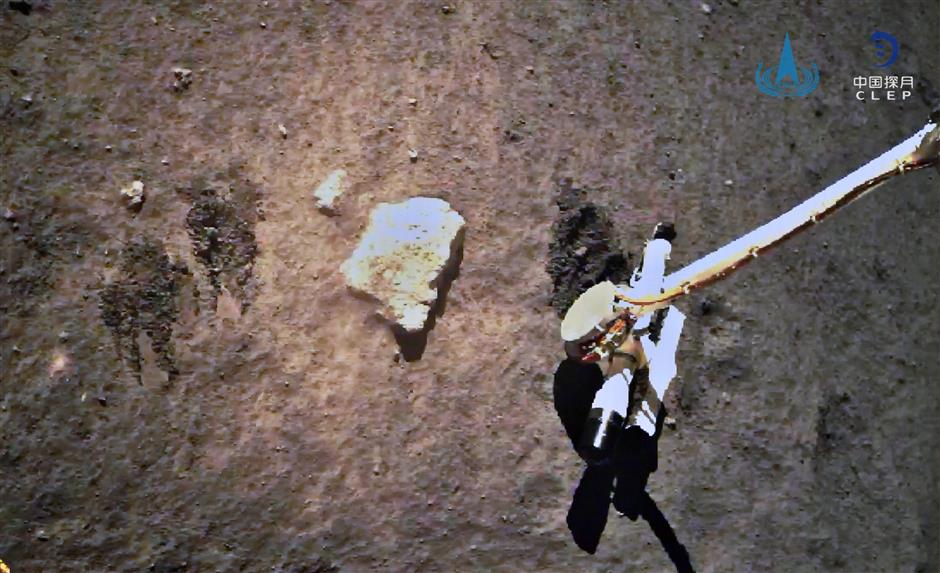 The moon samples have been sealed inside the spacecraft to ensure that they are kept in a vacuum and free from the influence of the external environment during its return to the Earth.

While retrieving samples is its main task, the lander is also equipped with multiple payloads, including a landing camera, panorama camera, lunar regolith penetrating radar and lunar mineralogical spectrometer, to extensively photograph the area surrounding its landing site, map conditions below the surface and analyze the lunar soil for minerals and water content.

The probe has withstood temperatures of over 100 degrees Celsius on the lunar surface.

The ascending vehicle is planned to lift off from the lunar surface with the samples, and dock with a module currently orbiting around the moon.

The samples would then be transferred to a return capsule on board the orbiting module for delivery back to Earth. Chang’e-5’s return module is supposed to touch down around the middle of December on the grasslands of Inner Mongolia, where China’s crewed Shenzhou spacecraft have made their returns.

If successful, the mission will make China only the third country to have retrieved lunar samples after the United States and the Soviet Union.

The Chang’e-5, the third Chinese probe to land on the moon, is the latest in a series of ambitious missions for China’s space program, which also has a probe en route to Mars. China made its first lunar landing in 2013. In January 2019, the Chang’e-4 probe landed on the far side of the moon, the first space probe from any nation to do so.