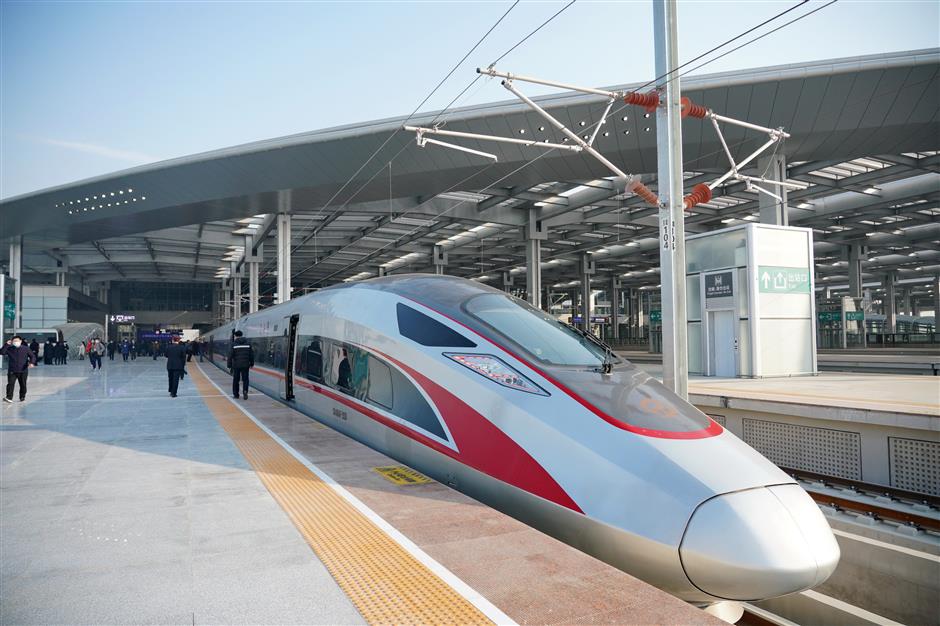 The Beijing-Xiong'an intercity railway opened to traffic on Sunday, connecting the Chinese capital with the country's "city of the future" — the Xiong'an New Area.

"I'm very excited to take the first train on the new railway," said Xiao Huibin, 48, a passenger from Rongcheng County in Xiong'an. He said he had taken many photos before boarding the C2702 train and would keep the ticket as a memento.

Xiao, who runs a food trade business in Beijing, commutes between Beijing and Xiong'an roughly once a week.

"It takes me over two hours one way by bus or by car. Now, the intercity trains have made my trip much more convenient," he said.

Travel time from Beijing West Railway Station to the Xiong'an New Area was cut from one and a half hours to about 50 minutes. It takes only 19 minutes to travel from Beijing Daxing International Airport to Xiong'an.

Of the 91-km newly built section of the railway, the part between Daxing airport and Xiong'an went into operation on Sunday, with a designed speed of 350 km per hour. The stretch between Beijing West Railway Station and Daxing airport opened in September 2019.

Travel time will be further reduced to 36 minutes after the existing section is upgraded, said Li Zheng, a senior manager of the Xiong'an high-speed railway corporation.

Located about 100 km southwest of Beijing, the Xiong'an New Area -- spanning the Rongcheng, Anxin, and Xiongxian counties and some adjacent areas -- aims to become a new engine for the modern economic system and to promote regional coordinated development.

Located near Baiyangdian Lake, Xiong'an Railway Station has a construction area of 475,200 square meters, the size of 66 soccer fields, and is designed to appear like dew on a lotus leaf.

The station's oval roof is a photovoltaic power generation system, echoing the green drive to develop the Xiong'an New Area.

Generating an annual average of 5.8 million kWh of power, the system helps cut carbon dioxide emissions by 4,500 tonnes every year, equivalent to planting 120,000 hectares of trees, according to Wu Yadong, chief engineer of the station project from China Railway Construction Engineering Group.

A 15-meter-wide sunlight belt improves the daylight in the waiting hall, said Wu.

Liu Weiqun, chairman of the China Railway Design Corporation, said they had adopted building information modeling (BIM) technology and some 70 cutting-edge technologies to build the railway. It includes the Internet of Things, cloud computing and big data, setting a new benchmark for intelligent high-speed railways globally. 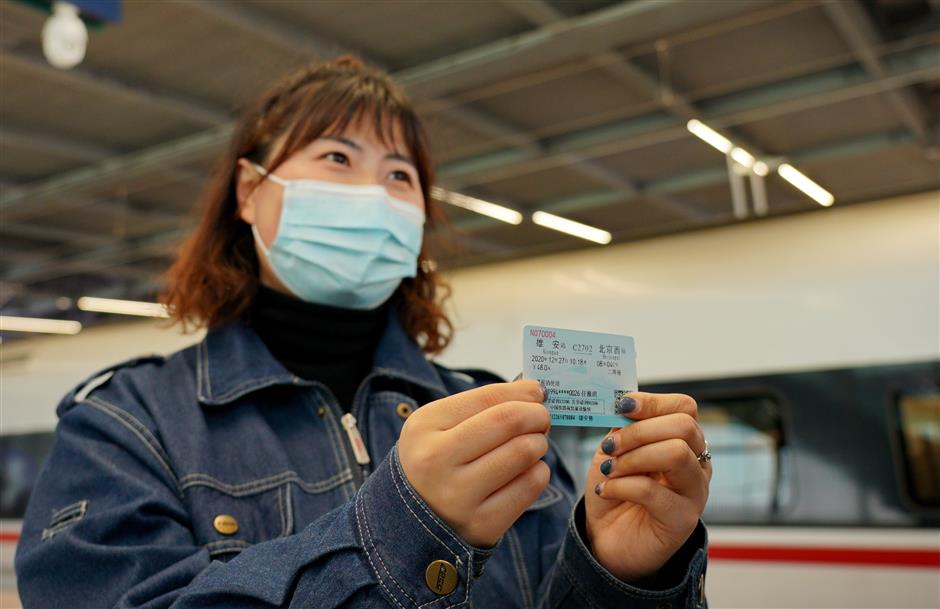 A passenger shows a ticket that takes her from Xiong'an New Area to Beijing on Sunday.

China announced plans to establish the Xiong'an New Area on April 1, 2017. It is a strategically important project for the coordinated development of the Beijing-Tianjin-Hebei region.

While Beijing's outer Tongzhou District has accommodated the administrative departments of the Beijing municipal government, Xiong'an in Hebei Province will relieve Beijing of functions non-essential to its role as China's capital, to treat its "urban ills" such as traffic jams and pollution.

With a planned area of 1,770 square km, Xiong'an is a new area of national significance that follows the Shenzhen Special Economic Zone and the Shanghai Pudong New Area. It aims to set an example for high-quality development in the new era.

Including Baiyangdian Lake, which has a total water surface of over 250 square km, 70 percent of the Xiong'an New Area will be covered by water or trees, according to the development plan.

Xiong'an will by 2035 be developed into a high-level modern city that is green, intelligent and livable, with relatively strong competitiveness and harmonious human-environment interaction.

Following delicate planning and design from top-notch experts at home and abroad, numerous projects broke ground in 2019. More than 100,000 workers are currently working on some 300 construction sites in Xiong'an. More than 18 million trees have been planted, covering a total area of 22,246 hectares.

Chang Yongshan, from Beijing's Daxing District, is the general manager of the Xiong'an branch of Taiji Computer Co Ltd. His company settled in Xiong'an in 2018 and participated in the new area's smart city planning and construction. It now has over 70 staff members in the area, most of whom are from Beijing.

"It takes me an hour and a half to drive between home and my workplace. The new train service will solve our commuting problem," said Chang, 39.

Nearly 3,000 enterprises with investments from Beijing have registered in Xiong'an so far, accounting for over 85 percent of its total.

According to plans, the Beijing-Xiong'an intercity line will be extended to link with other high-speed railway lines across the country.

"Transportation should come first in developing the economy," said Zhang Gui, a professor with the College of Economic and Social Development of Nankai University.

"The intercity railway operation will better connect the new area with other places in the country," Zhang said. 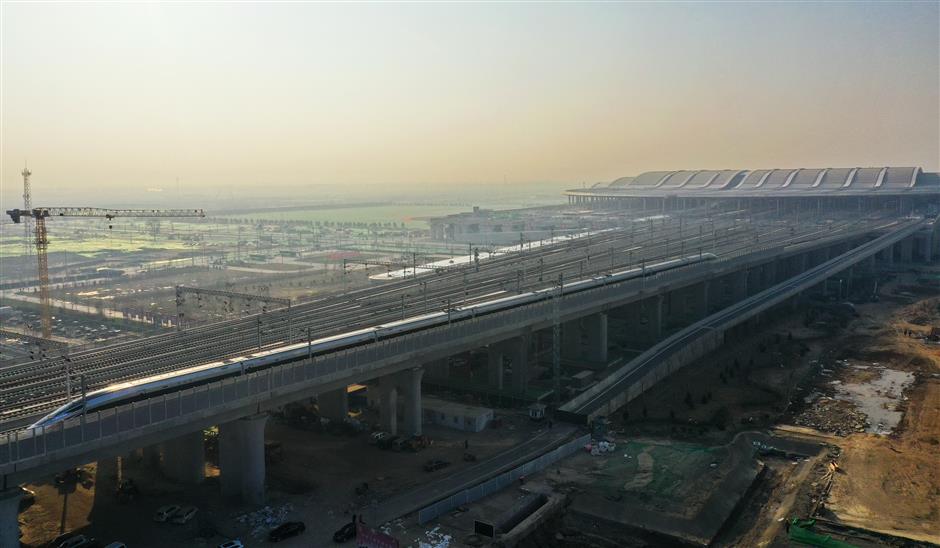