In freezing winter days of Beijing, a small eatery is leaving its patrons with full bellies and warm hearts by offering a helping hand to those in need with free meals.

The inconspicuous halal restaurant, located near the Sanyuanqiao overpass on the northeastern Third Ring Road, has gathered a robust online following this winter because of a secret code — "A-set meal."

Anyone who comes to the restaurant and asks for an "A-set meal" will be given a meal free of charge, for as the signs on the front entrance explain, "It is not easy to deal with working away from home, family, and friends. Our restaurant would like to offer you free dinner, and may you care for others when you are capable." 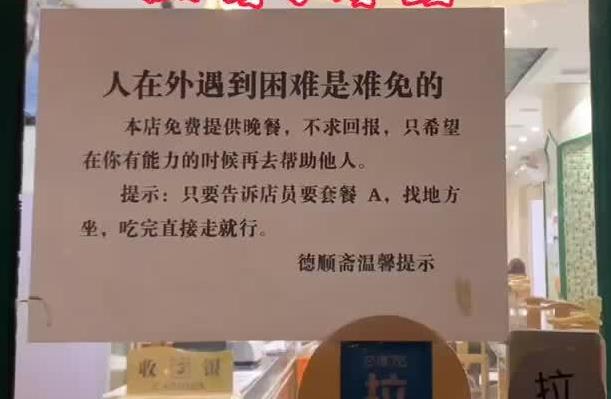 The signs on the front entrance of the restaurant says that anyone who comes to the restaurant and asks for an "A-set meal" will be given a meal free of charge.

The dinner is a big bowl of braised beef noodle soup which usually costs 22 yuan (about 3.37 US dollars), said Ma Zongxian, head chef of the restaurant.

"We began to provide free meals in October. It's really hard for many this year because of COVID-19 and our small business also suffered from the epidemic. Our boss said we should just do what we are able to do to help those who are facing difficulties," Ma added.

Yu Chenghao, the owner of the restaurant, said he did not expect his restaurant would rise to overnight stardom due to what he called "a small favor." "I did so because I was once helped by a stranger," he said.

Yu still remembers a time when he was a college student in Kunming, capital of southwest China's Yunnan Province. He had no money to buy food on the Mid-Autumn Day of 2012, usually an occasion for family reunions, as his wallet had been stolen.

The owner of a restaurant offered him a free bowl of rice noodle soup and gave him five yuan to buy a bus ticket back to school.

Yu was deeply moved by the owner's kindness and was determined to help others in return when he could.

"We thought people might be in trouble this year, and we decided to provide the 'A-set meal' after our restaurant gradually recovered," Yu said.

"Actually, I started the 'A-set meal' in my Wuhan restaurant in June 2019. I am neither the only nor the first one to do so. You can find restaurants that offer free meals for people in trouble across the country. At the very beginning, I was inspired by ideas on the Internet," Yu said.

"Due to the COVID-19 epidemic, my business suffered and I had to close my business for a while. Thanks to the government, I was exempted from paying rent and my employees received subsidies. So, I think it was my turn to help others," Yu said.

A man who recently came to order an 'A-set meal' on a snowy night left a deep impression on a waitress surnamed Ma.

"The man was about in his 30s. He wore a pair of glasses and looked like an office worker. His white shoes had become muddy in the snow," she said. "He asked if he could order an 'A-set meal' because he was just laid off as his company was badly affected by the epidemic."

"I replied 'Yes, of course.' He thanked me and sat just over there near the front door," the waitress pointed to a seat in the corner.

"When I served him a bowl of noodles, I saw him take off his glasses to wipe away tears. I told him he could ask for more noodles if it wasn't enough."

Apart from those who have fallen on hard times and are in need of a warm meal on a cold winter night, disabled and homeless people are also regulars of the restaurant, according to the waitress.

Yu said he used the expression 'A-set' rather than "free meal" because he hopes to protect people's dignity.

"As the New Year is coming, I hope the epidemic will end soon. We will continue to provide the meals for those in need in the new year," Yu said. 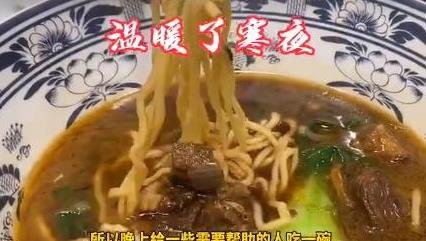 Beef noodle is included in the "A-set meal."