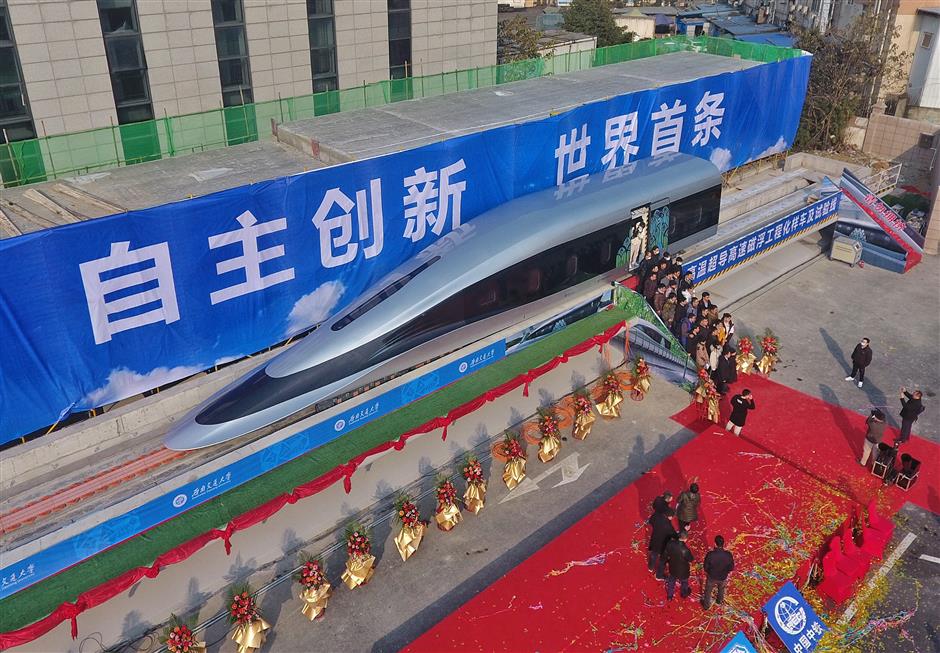 A prototype locomotive using high-temperature superconducting maglev technology was rolled out on Wednesday in southwest China’s city of Chengdu.

The domestically developed maglev train boasts a designed speed of 620kph, according to Southwest Jiaotong University, one of the train’s designers.

A 165-meter line to test the new train was launched on the same day. The 21-meter-long silver-and-black locomotive was seen floating slowly along the track. Experts hailed the key development of HTS technology emerging from lab tests in China.

“Although the theory sounds good, everyone saw it (HTS maglev technology) as a lab toy in the past, without tests in a real situation,” said Deng Zigang, deputy director of the university’s research center for super-high-speed maglev transport in low-pressure tubes.

China has been a world leader in the construction of high-speed railway. By the end of 2020, the country had 37,900km of high-speed rail lines in service, the longest in the world, according to China’s railway operator.

Maglev trains, levitated from the tracks and propelled by powerful magnets to avoid wheel-rail friction, are designed to break the speed bottlenecks facing high-speed trains. The country’s first commercial maglev system was put into operation in 2003 in Shanghai. The 30km stretch between downtown and the city’s Pudong airport is based on German maglev technology of “electromagnetic suspension.”

China’s first medium-and-low-speed maglev line fully supported by the country’s own EMS technology started operations in May 2016 in Changsha, Hunan Province. It has a design speed of 100kph.

Compared with other maglev technologies, HTS tech is more suitable for the futuristic concept of superfast transportation in vacuum tubes, where trains could hit speeds of over 1,000kph, according to experts.

“The HTS technology can make the train float without electricity, and it can be moved with just one hand,” said Deng.

At the site, a reporter succeeded in moving the 12-ton levitated locomotive with one finger.

Wu Zili, a senior engineer with the university, said the cost of the HTS maglev system is estimated to be slightly higher than high-speed rail, but it is expected to go down if mass production of components is achieved.