About 1.6 million residents were banned from leaving a Beijing district on Wednesday as two COVID-19 cases linked to a new virus variant first found in Britain were identified in the Chinese capital.

The southern Daxing District issued a notification banning all people in the district from leaving the capital in the wake of new cases.

Those who need to travel outside the city should obtain approval from local authorities and have a negative nucleic acid test result taken within three days, according to the leading group on epidemic prevention and control work in Daxing.

According to a municipal press conference, the compound’s COVID-19 risk classification was upgraded to high-risk on Wednesday. The city has three medium-risk areas for COVID-19 so far, all in Shunyi District.

Officials said that two cases in Daxing reported on Sunday were linked to the mutant strain spreading in Britain, which is believed to be a more transmissible form of the virus.

The cases had “no genetic correlation with previously reported local cases and imported cases in Beijing,” the head of the Beijing health authority Pang Xinghuo told reporters, but are “considered to be variants of the new coronavirus discovered in the UK.”

Daxing District is testing all residents for COVID-19. 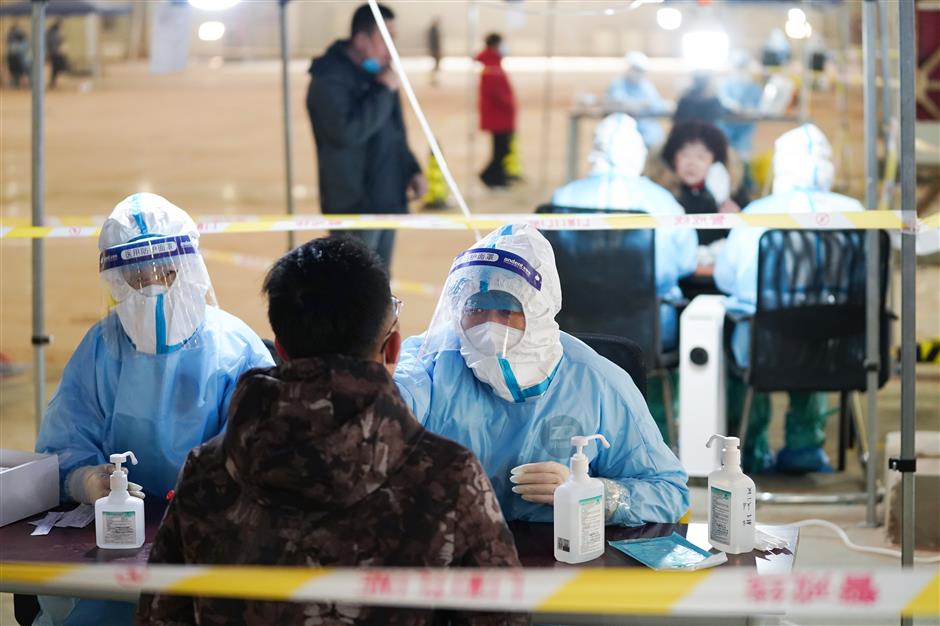 A medic collects a swab sample from a resident at a COVID-19 testing site on Wednesday in Beijing’s Daxing District, where new locally transmitted cases were found.

The district will enforce stringent lockdown management in five residential compounds in the Tiangongyuan Subdistrict. Over 24,000 residents of the compounds are required to quarantine in their homes.

All public places in the Tiangongyuan Subdistrict are required to suspend operation. Visitor flows in public places outside the subdistrict, including stores, commercial buildings, hotels, cinemas, and gyms should be limited to 50 percent of their maximum capacity.

Training institutes in the district have also been asked to close, while special institutions, such as nursing homes and welfare homes, shall be managed with closed-off measures to contain the COVID-19 resurgence.

Meetings of 50 or more people in the district have been banned, while “weddings should be postponed and funerals simplified,” the Daxing government said.

It also ordered all kindergarten, primary and secondary students in the district to study at home.

A total of 17 observation centers in Daxing are being used to facilitate centralized isolation for students and teachers from schools that have reported confirmed cases.

Additionally, public transportation in the district is required to cap passenger flows at 75 percent of full capacity. Beijing’s subway operator said it shut down the Tiangongyuan station located nearby the Daxing patients as part of COVID-19 prevention measures.