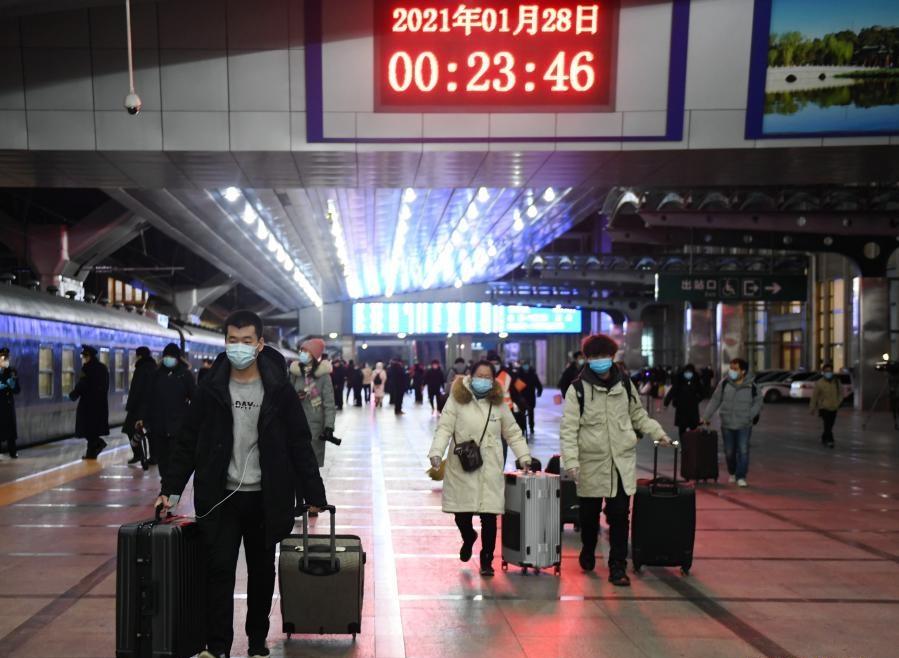 Passengers walk to board their train at the Beijing Railway Station, in Beijing, capital of China on January 28. The Spring Festival travel rush, known as the world's largest annual human migration, lasts 40 days from January 28 to March 8 this year.

In the 40-day travel season, also known as chunyun, many people will travel to reunite with their families for the Lunar New Year, or Spring Festival, which falls on February 12 this year. 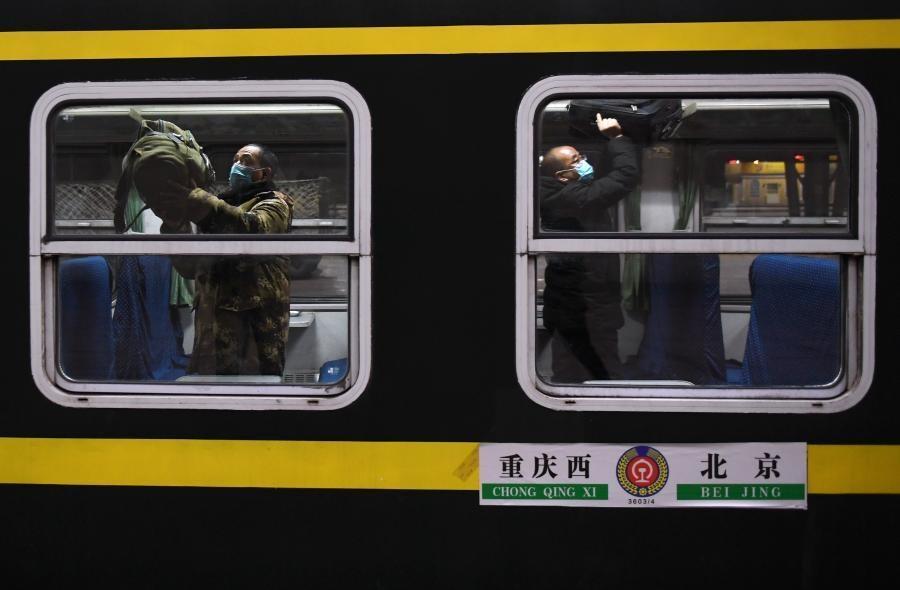 Passengers place their luggage on the overhead rack on the train 3603 from Beijing to Chongqing, in Beijing, capital of China, on January 28.

To reduce the flow of personnel and curb the spread of the epidemic, many places across China have encouraged residents and migrant workers to stay put to celebrate the festival.

Miao Biao, a migrant worker in Hefei, capital of east China's Anhui Province, said it would be his first time in 11 years to spend the holiday in Hefei instead of his hometown in the city of Fuyang.

"My parents have bought red couplets and lanterns as festival decorations. We've decided to video chat with our relatives and distribute digital lucky money via WeChat," said Miao, 30.

According to the appliance maker Whirlpool China, where Miao works, about one-fourth of its 2,600 workers have chosen not to return to their hometown during the holiday.

The company will grant them cash rewards, holiday gifts as well as a three-day vacation for a home visit in April, while also reimbursing their travel expenses, said Lu Tao, vice president of human resources for Whirlpool China.

Many local authorities and companies have rolled out measures to provide better benefits to those staying put.

Hangzhou, capital of east China's Zhejiang Province, has launched a plan to distribute 1,000 yuan to each migrant worker who chooses to stay in the city. Migrant workers who remain in Suzhou, Jiangsu Province, can enjoy free visits to over 10 major local tourist attractions during the holiday. 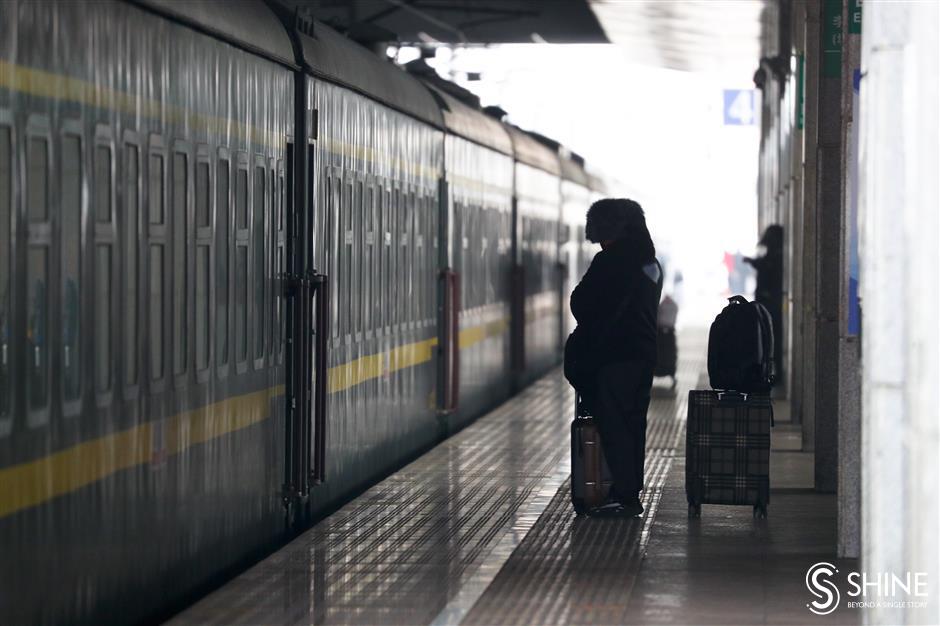 Passengers wait to board their train at Shanghai Railway Station on January 28.

While workers like Miao have chosen to stay where they are, some others have arrived home early to avoid the peak period for travel.

Armed with a negative COVID-19 test result, Zhang Baosheng, who works in Huzhou, Zhejiang Province, boarded a high-speed train bound for his home in the rural area of Anhui Province in mid-January.

"I registered my information in the town as soon as I went back and have quarantined myself at home for seven days," said Zhang.

According to the NHC, people must produce a negative result on a COVID-19 test taken within seven days before returning to rural areas for family reunions.

Such travelers then need to monitor their health for 14 days at home, taking their body temperature and guarding against any symptom of COVID-19.

"For the safety of my family and folks, I think these requirements are reasonable and I support it," Zhang told Xinhua over the phone.

Postgraduate Li Shenxiao arrived home in the city of Huainan, Anhui Province, earlier this month from the Wuhan University of Technology in Wuhan, capital of Hubei Province.

"My winter vacation started about 15 days earlier than last year, so I didn't need to scramble for a ticket like before," said Li, 26. 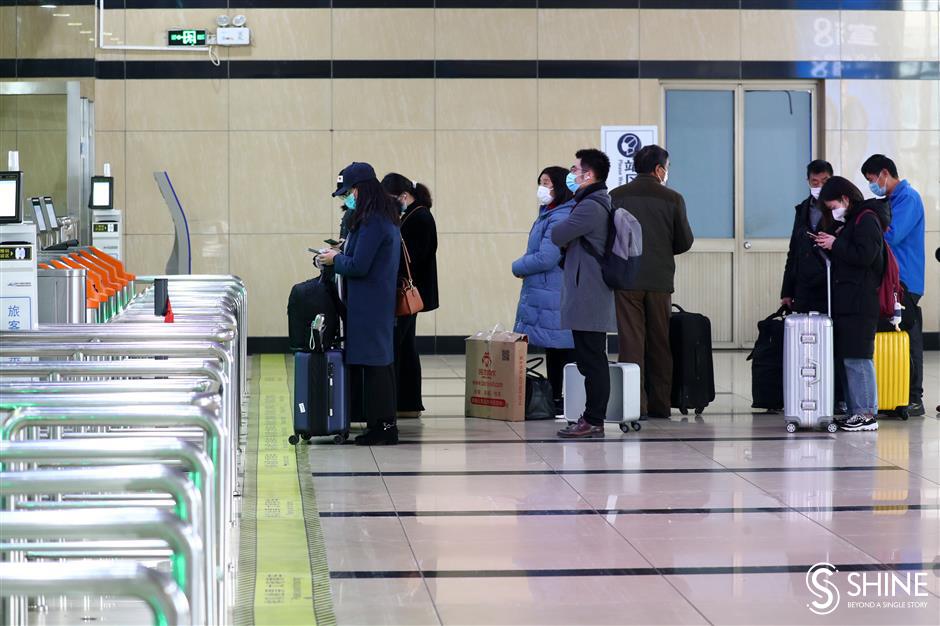 Passengers wait to check in at Shanghai Railway Station on January 28.

Apart from advocating off-peak travel, China has underscored measures including controlling passenger numbers on public transport and conducting regular nucleic acid tests and vaccinations among frontline workers in the sector.

According to a plan unveiled by the State Council to reduce mass gatherings and enhance epidemic prevention and control during the travel season, local government agencies working in epidemic prevention and control are required to carry out weekly nucleic acid tests for those working on the front lines during the travel season. These workers must also be given priority access to COVID-19 vaccines.

Data from the NHC showed that a total of 22.77 million doses of COVID-19 vaccine have been administered in China by Tuesday with frontline workers prioritized, including those in aviation and other public transport sectors.

Modern technologies including non-contact facilities and robots have also come to the fore.

At Shanghai Hongqiao Railway Station, large robots are deployed to enhance the efficiency of disinfection and cleaning.

An all-in-one machine for contact-free temperature screening and security checks has been put in use at Hefei South Railway Station this year for the first time.

"Passengers only need to walk through and stand still for two seconds to complete the security check and temperature screening," said Liu Huaitao, market manager of Brainware Terahertz Information Technology Co Ltd, developer of the machine.

At Beijing Daxing International Airport, the disinfection frequency of public contact facilities has increased and environmental sampling and testing will be conducted weekly amid the travel season, with all employees taking nucleic acid tests. 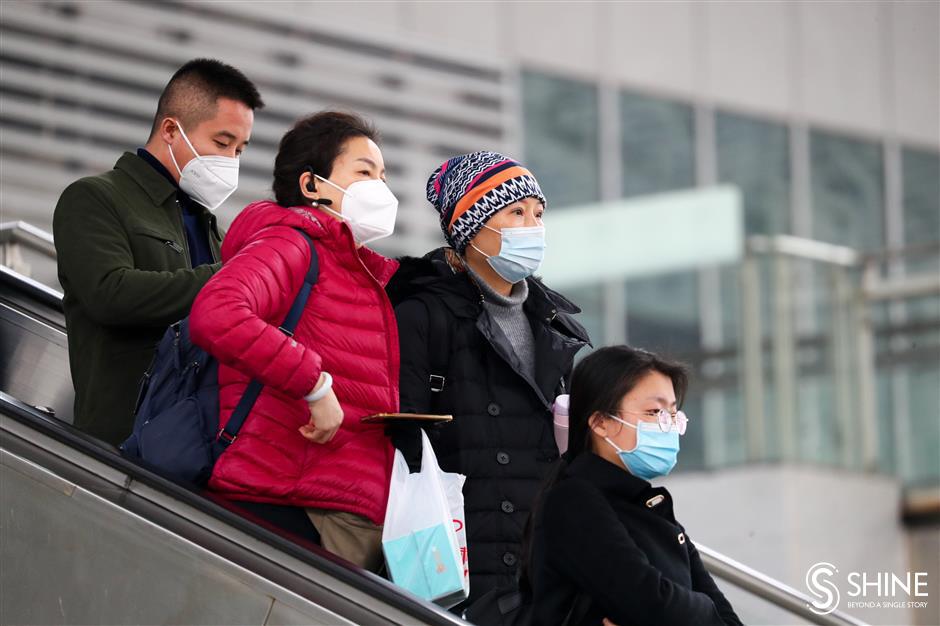 Passengers on an escalator at Shanghai Railway Station on January 28.