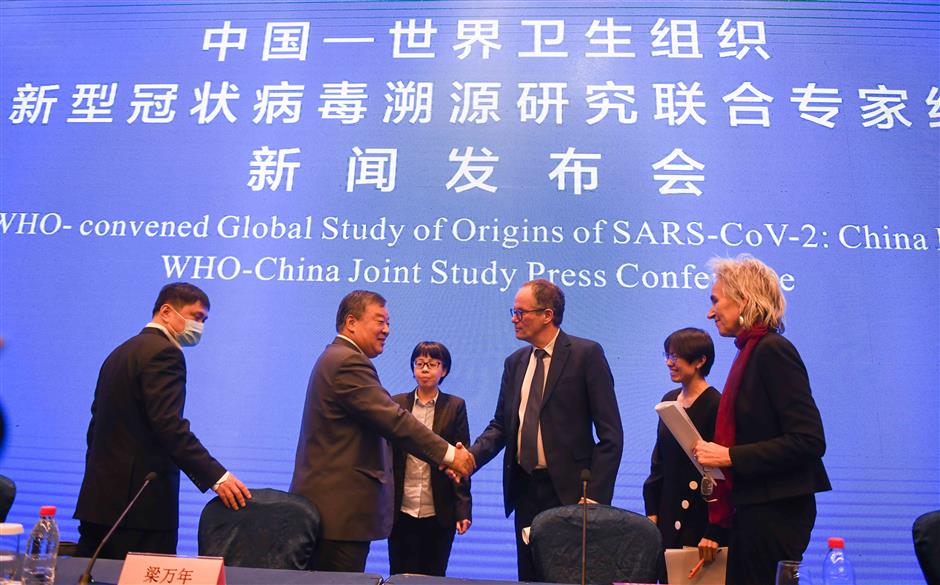 Chinese and World Health Organization experts have completed their work in Wuhan, which is part of global scientific research on the origin of the novel coronavirus, according to a joint WHO-China press conference.

Among the outcomes of the joint study, a coronavirus with high similarity to the novel coronavirus in gene sequences occurs in bats and pangolins. But the similarity is still not enough to make it a direct ancestor of the novel coronavirus. Bats, pangolins, weasels, cats, and other species all could be potential natural hosts, according to experts attending the press conference in Wuhan, capital of central China's Hubei Province, on Tuesday.

The virus was found in environmental tests at the Huanan seafood market after its closure, especially in its aquatic product stalls. The coronavirus at the market might have been introduced through channels such as infected people, contaminated cold chain products, and animal products, but it is still uncertain.

No positive results occurred in large-scale testing of animal products in the market. No novel coronavirus was found either in samples of bats in Hubei Province or large numbers of livestock, poultry, and wild animals across China.

The experts identified four hypotheses for the source of the transmission of the novel coronavirus to the human population, including direct zoonotic spillover, the cold-chain food, an intermediary host species, and a laboratory-related incident.

The joint study said that a laboratory incident is "extremely unlikely" as the cause of COVID-19.

It said introduction through an intermediary host species is "the most likely" passway.

Direct transmission or introduction through cold-chain food is also likely.

A sudden outbreak of the novel coronavirus occured in Wuhan at the end of 2019. China took prompt action, actively released epidemic information, and adopted the most comprehensive and strict prevention and control measures, achieving notable results.

According to an agreement between China and the WHO in July 2020, an international expert WHO team arrived in Wuhan on January 14. They formed a joint body with Chinese experts for the Chinese part of the global study on the novel coronavirus origins.

The team studied a massive amount of epidemic-related data and visited nine facilities, including Wuhan Jinyintan Hospital, Huanan seafood market, and the Wuhan Institute of Virology, under the Chinese Academy of Sciences. The team conducted extensive exchanges with local medical workers, lab researchers, scientists, and market managers. They also interviewed social workers, community workers, residents, recovered patients, and families of medical workers who lost their lives in the epidemic.