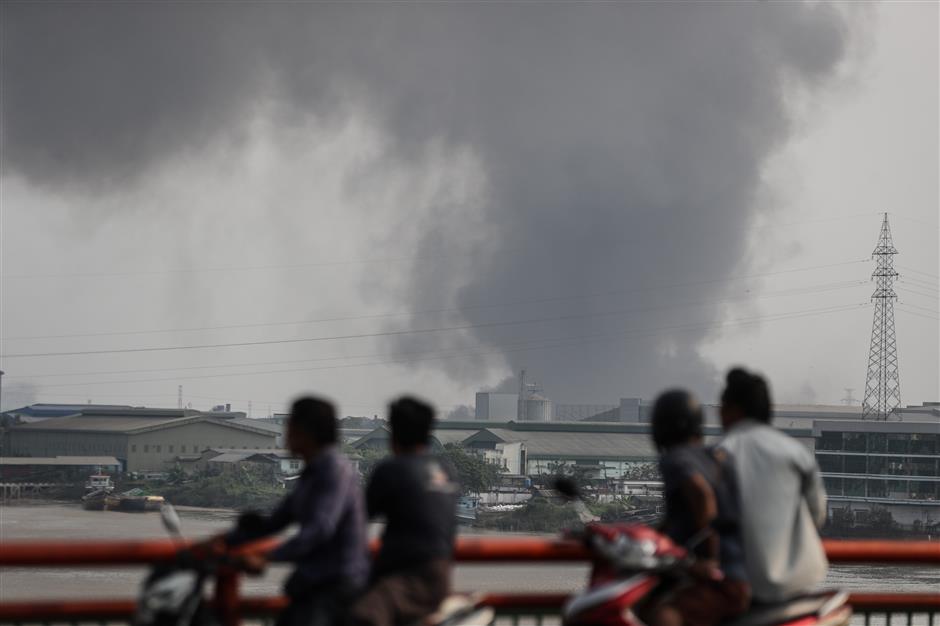 Black smoke billows from the industrial zone of Hlaingthaya township in Yangon, Myanmar, on Sunday. Martial law was imposed in the township after some factories were burnt down.

China will continue to urge Myanmar to take practical measures to stop all acts of violence and guarantee the safety of Chinese nationals and companies in the country, the Chinese Foreign Ministry said on Monday.

Zhao Lijian, a spokesperson for the Chinese Foreign Ministry, made the remarks in response to Chinese-funded factories being damaged and Chinese workers injured in Myanmar on Sunday.

China urges all parties in Myanmar to keep calm, exercise restraint and solve disputes through dialogue and negotiation, Zhao said.

Two Chinese workers were injured after 32 Chinese-funded factories were damaged and burned on Sunday, the Chinese Embassy in Myanmar told the Global Times on Monday, noting that the incident caused property losses of about 240 million yuan (US$37 million).

The embassy urged Myanmar to take action to stop violence and punish perpetrators.

“China urges Myanmar to take further effective measures to stop all acts of violence, punish the perpetrators in accordance with the law and ensure the safety of life and property of Chinese companies and personnel in Myanmar,” read the statement.

China also called on the people of Myanmar to express their demands in a lawful manner and not be incited or used in a way that undermines China-Myanmar ties.

Carrying iron rods, axes and gasoline, the arsonists beat the security personnel and set fires at the factories’ entrances and in warehouses.

Vehicles and nearby shops were also vandalized.

The identities of arsonists have not been ascertained yet.

Myanmar’s State Administration Council on Monday added martial law in North Dagon, South Dagon, Dagon Seikkan and North Okkalapa townships of Yangon region, according to the announcement of the Office of the Commander-in-Chief of Defence Services.

The council gave the administrative and judicial power to the commander of Yangon region to perform security, maintain the rule of law and tranquility.

On Sunday, martial law was also imposed in the Hlaingthaya and Shwe Pyi Thar townships of Yangon region after some factories in the townships were burnt down.