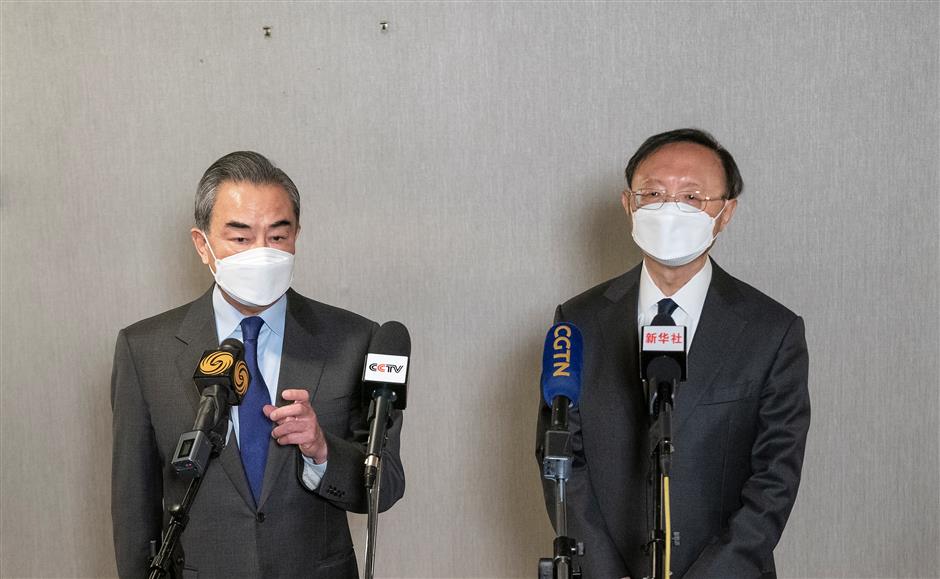 Yang Jiechi (right), a member of the Political Bureau of the Communist Party of China Central Committee and director of the Office of the Foreign Affairs Commission of the CPC Central Committee, and Chinese State Councilor and Foreign Minister Wang Yi talk to media after the strategic dialogue in Anchorage, Alaska, on March 19, 2021.

Senior officials from China and the United States on Friday concluded a high-level strategic dialogue in Anchorage, the US state of Alaska.

The two-day dialogue marked the first high-level contact between the two countries after their heads of state had a phone call on the eve of the Chinese lunar new year, and the first face-to-face talks between high-level officials of the two sides since US President Joe Biden took office in January.

The meeting was attended by Yang Jiechi, a member of the Political Bureau of the Communist Party of China (CPC) Central Committee and director of the Office of the Foreign Affairs Commission of the CPC Central Committee, Chinese State Councilor and Foreign Minister Wang Yi, US Secretary of State Antony Blinken and US National Security Adviser Jake Sullivan.

The China-US high-level strategic dialogue was candid, constructive and helpful, though there are still some important differences between the two sides, said Yang on Friday.

China will firmly safeguard its national sovereignty, security and development interests, and China's development and growth is unstoppable, said Yang.

The two sides should handle China-US relations in the spirit of non-conflict, non-confrontation, mutual respect and win-win cooperation, so as to move forward the bilateral relationship on a sound and stable track.

It is upon that basis that the door for China-US dialogue would be always open, he said.

The Chinese side also made it clear to the US side that sovereignty and territorial integrity are major issues of principle, said Wang, stressing that the US side should not underestimate China's determination to safeguard its national sovereignty, security and development interests, nor should it undrerestimate the Chinese people's will to safeguard national dignity and legitimate rights and interests.

The claim that there is genocide in China's Xinjiang is the biggest lie of the century, said the Chinese delegation on Friday following the end of the China-US high-level strategic dialogue in Anchorage, the US state of Alaska.

The Chinese side is ready to engage in exchanges with the US side on the basis of mutual respect, and the door of Xinjiang is wide open to the world, said the delegation.

However, China will not accept any investigation in Xinjiang based on the presumption of guilt by those who are biased and condescending, and who want to lecture China, it said.

It is hoped that the US side can respect facts, call off attacks against and smearing of China's Xinjiang policy, and abandon double standards on anti-terrorism, it added.