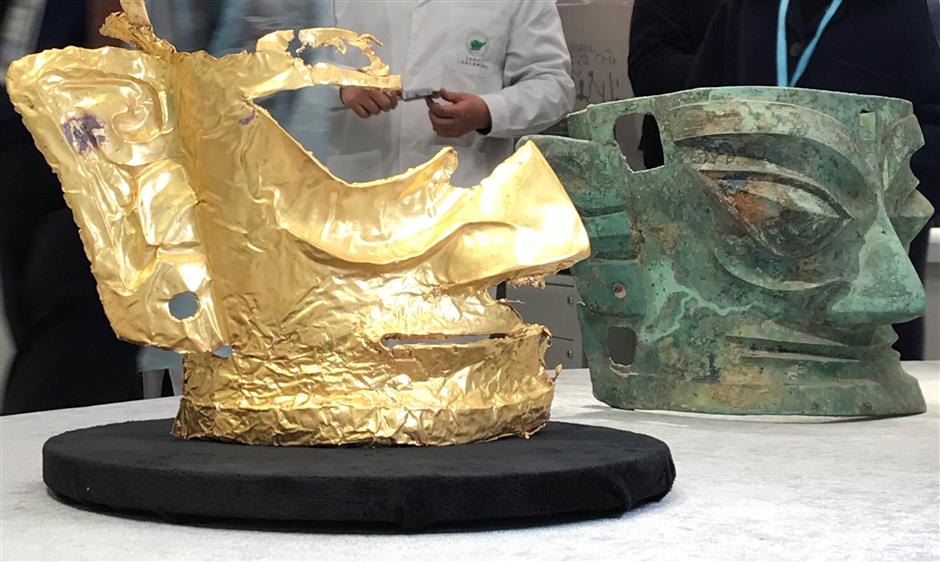 Chinese archaeologists announced Saturday that some new major discoveries have been made at the legendary Sanxingdui Ruins site in southwest China, helping shed light on the unified, diverse origin of the Chinese civilization.

Archaeologists have found six new sacrificial pits and unearthed more than 500 items dating back about 3,000 years at the Sanxingdui Ruins in Sichuan Province, the National Cultural Heritage Administration announced in the provincial capital Chengdu.

So far, archaeologists have unearthed various important cultural items from four of the pits, including pieces of gold masks, gold foil, bronze masks, bronze trees and large numbers of ivories. Pieces of miniature ivory sculptures, carbonized rice and seeds of trees were also excavated. The rest of the newly discovered pits are still under excavation.

"Surprisingly, we have unearthed some never-heard-of-before bronze ware items," said Lei Yu, with the Sichuan Provincial Cultural Relics and Archaeology Research Institute. "For instance, some large and delicate bronze ware items have bizarre-looking dragon or cow designs on them."

In another major discovery, residues of silk and textile products were unearthed for the first time at Sanxingdui, indicating "the ancient Shu Kingdom was one of the important origins of silk in ancient China," according to Tang Fei, head of the excavation team and chief of the institute.

The new pits sit next to two sacrificial pits discovered in 1986. They are rectangular, with areas ranging between 3.5 square meters and 19 square meters. Together they form an area in which people of the ancient Shu civilization offered sacrifices to heaven, earth and their ancestors, and prayed for prosperity and peace.

More than 30 institutions have participated in the latest round of excavation work, featuring the use of modern technologies and integration of excavation and preservation.

The Sanxingdui Ruins is dubbed as one of the greatest archeological finds of mankind in the 20th century. The site was accidentally discovered by a farmer when he was digging a ditch in the 1920s. Covering 12 square km, the ruins are located in the city of Guanghan, about 60 km from Chengdu and are believed to be the remnants of the Shu Kingdom, dating back at least 4,800 years and lasting over 2,000 years.

In 1986, a large number of unique relics were unearthed in the No. 1 and No. 2 pits, arousing global interest. So far, more than 50,000 pieces of relics have been unearthed at Sanxingdui.

Authorities placed the Sanxingdui Ruins under state-level protection in 1988.

In the new pits, archaeologists are using hand shovels, surgical knives and bamboo slips to retrieve the ancient artifacts with great care.

"We have to be extra careful in retrieving these relics," said Jiang Luman, with the Chengdu Cultural Relics and Archaeology Research Institute. Jiang is one of the workers at the No. 5 pit.

Jiang said a lot of the ivory pieces at the pit are in poor condition and require special care during excavation.

"The ivory needs to remain humid and at a stable temperature, so we take various measures to ensure it is kept under such conditions," she said. "So far, we have retrieved more than 100 cultural items from the pit.

The ancestral types of some bronze items unearthed at Sanxingdui can be found in the Central Plains or other areas along the Yangtze River, which is powerful evidence of frequent exchanges, according to Chinese researchers.

"The new discoveries will enrich and deepen our understanding of the Sanxingdui culture," said Song Xinchao, deputy director of the National Cultural Heritage Administration.

The newly found gold masks, bronze masks and human figures are all reflections of the distinctiveness and creativity of the ancient Shu civilization, according to archaeologists.

Jay Xu, head of the Asian Art Museum of San Francisco, told Xinhua that the highly developed bronze ware art at Sanxingdui "made it outstanding among many regional civilizations in China and unique among ancient civilizations," adding that the new discoveries will be of enormous interest internationally.