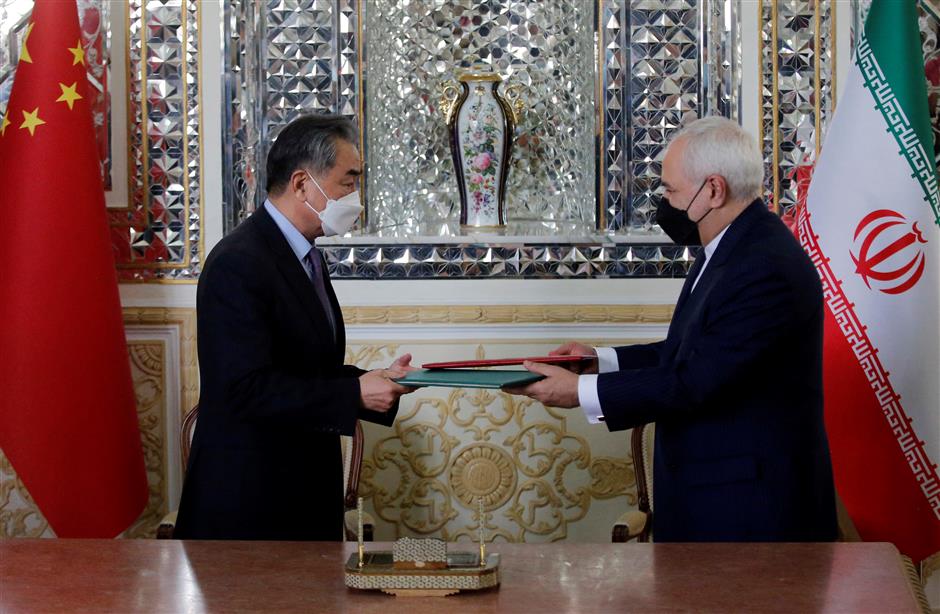 Chinese State Councilor and Foreign Minister Wang Yi on Saturday signed a 25-year agreement in Tehran with his Iranian counterpart Mohammad Javad Zarif to enhance comprehensive cooperation between the countries.

Under the new deal, the two sides will tap the potentials in economic and cultural cooperation and make plans for long-term cooperation, said Wang, adding that he believes this will promote the continuous upgrading of the China-Iran comprehensive strategic partnership so as to better benefit the two peoples.

Zarif said that the signing of the comprehensive cooperation plan will inject new impetus into further strengthening their mutually beneficial cooperation.

The agreement covers a variety of economic activity from oil and mining to promoting industrial activity in Iran, as well as transportation and agricultural collaborations, Iranian TV reported.

The deal, which had been discussed since 2016, also supports tourism and cultural exchanges. It comes on the 50th anniversary of the establishment of diplomatic relations between China and Iran.

On the Iranian nuclear issue, the Iranian top diplomat stressed that the United States, instead of making unreasonable demands on Iran, should take the first step, lift unilateral sanctions against Iran, and return to the Joint Comprehensive Plan of Action.

Calling China as a reliable partner on this matter, Zarif said Iran is willing to work closely with China to push the JCPOA back on track.

Wang said that the current situation of the Iranian nuclear issue was caused by the unilateral withdrawal from the pact by the United States.

He urged the United States to lift its illegitimate sanctions against Iran, cancel its measures of long-arm jurisdiction over third parties, and resume the implementation of the JCPOA comprehensively and unconditionally.

The relevant parties should lay the ground for restoring the JCPOA through formulating a roadmap with synchronization and reciprocity, and seeking early results, said the Chinese diplomat, adding that China is willing to continue to play a constructive role in this regard.