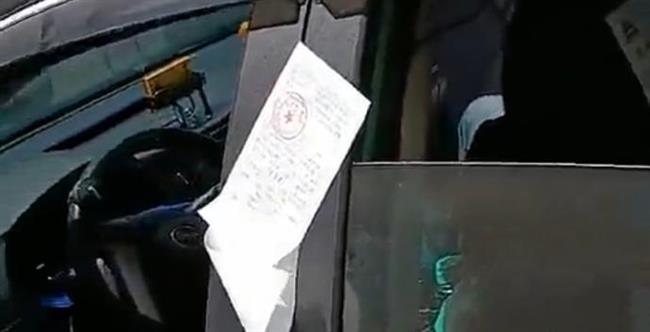 The parking ticket issued to a taxi with a deceased driver in Xi'an, Shaanxi Province, on May 1, 2021.

Three traffic police officers in Xi’an, Shaanxi Province, were given warnings and criticized for issuing a parking ticket to a taxi without noticing the driver was dead.

The Xi’an Public Security Bureau said in a statement today that the police officers did not strictly follow protocols and their enforcement was “not up to standards or accurate.”

After the driver stopped the taxi at 4:57am on May 1, he moved to the passenger seat and laid down. He then had a seizure and began vomiting, surveillance video showed.

The driver was motionless after 9:42am.

Finding the car was parked illegally, a police officer wrote a ticket at 10:19am and left without noticing the driver was inside.

The driver was not discovered until people walking by noticed him and called an ambulance at 10:43am. The taxi's front windows were open, its double lights were flashing and the driver's mobile phone was ringing, China Central Television reported.

According to China’s Road Safety Traffic Law, police officers are supposed to give oral warnings to people whose cars are parked illegally and ask them to move their vehicles. Only if the driver is not at the wheel or refuses to move should a fine be issued.