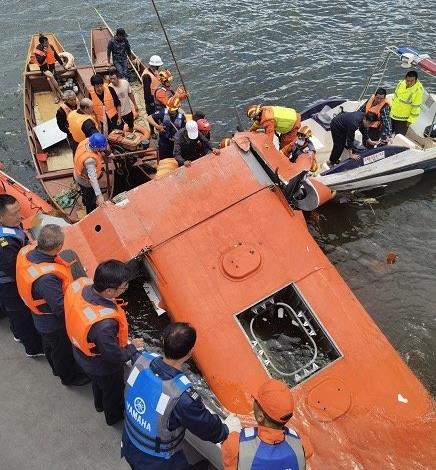 Rescuers salvage the wreckage of the helicopter from Erhai in Dali City, southwest China's Yunnan Province, on May 10, 2021.

All the four crew members on board a helicopter were confirmed dead after it crashed into a lake in Dali City, southwest China's Yunnan Province on Monday morning, local authorities said on Tuesday.

Two crew members were rescued at around midday Monday, but died after emergency medical treatment failed. Two other members were found around 2:55am on Tuesday and confirmed dead.

The helicopter crashed into the Erhai Lake at 10:20am on Monday as it was attempting to draw water to clear and irrigate a burnt area caused by a forest fire, said the information office of the Dali municipal government.

The fire broke out on Sunday in a forest and was extinguished early Monday. A total of 2,532 people were mobilized to extinguish the fire.