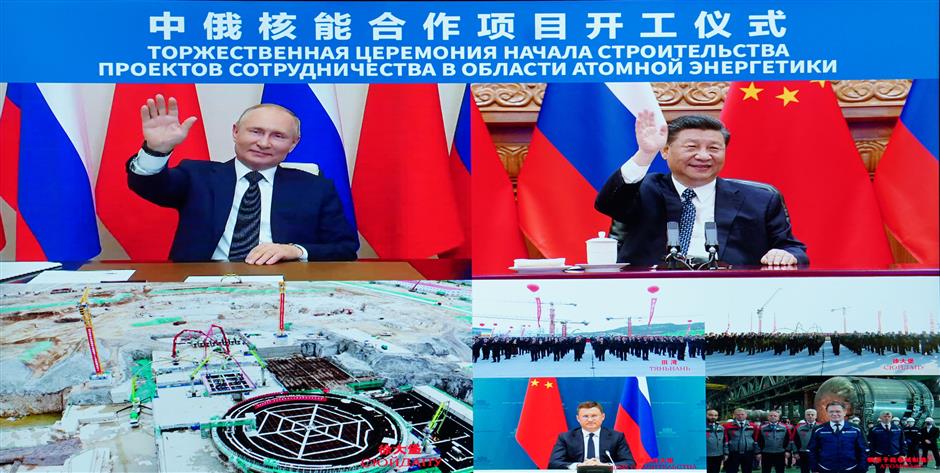 He Lifeng, vice chairman of the National Committee of the Chinese People's Political Consultative Conference and head of the National Development and Reform Commission, co-chaired the ceremony with Russian Deputy Prime Minister Alexander Novak.

Heads of relevant departments, local officials and constructor representatives of China and Russia attended the ceremony from the sub-venue of Tianwan nuclear power plant in Lianyungang City, east China's Jiangsu Province, sub-venue of Xudapu nuclear power plant in Huludao City, northeast China's Liaoning Province, and two Russian sub-venues. The heads of the companies of both countries reported on the progress of the project to the two heads of state.

Speaking at the ceremony, Xi extended congratulations on the launch of the China-Russia nuclear energy cooperation project and paid high respect to the constructors from the two countries.

Noting that this year marks the 20th anniversary of the signing of the China-Russia Treaty of Good-Neighborliness and Friendly Cooperation, Xi said that he and President Putin have agreed to advance the development of bilateral relations to a higher level and expand the ties to broader fields.

In the face of the COVID-19 pandemic unseen in a century, China and Russia have firmly supported each other and cooperated closely and effectively, which is a vivid demonstration of the China-Russia comprehensive strategic partnership of coordination for a new era, he said. 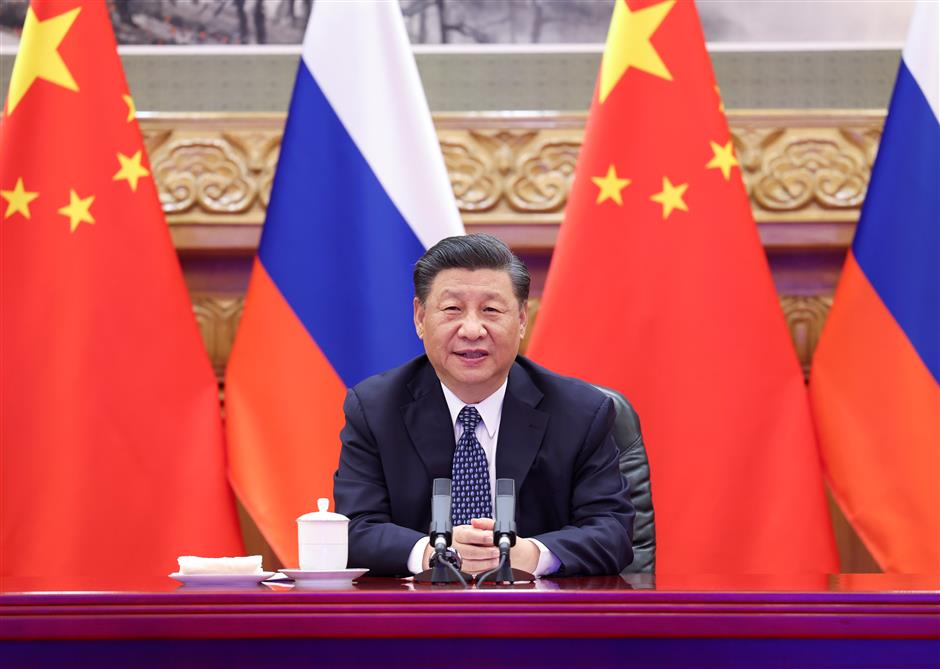 Xi stressed that energy cooperation has always been the most important area of practical cooperation which generates the largest achievement and covers the widest scope between the two countries.

Noting that nuclear energy is the strategic priority for bilateral cooperation and a series of major projects have been completed and put into operation, Xi said the four nuclear power units that kicked off construction on Wednesday mark another major landmark in China-Russia nuclear energy cooperation.

Xi put forward a three-point proposal at the ceremony. First, he called on both sides to adhere to the principle of safety first and set a model for global nuclear energy cooperation.

It is necessary to construct and operate the four units with high quality and high standards, create a global benchmark in nuclear safety, give full play to complementary advantages, expand and deepen bilateral and multilateral cooperation on nuclear energy, and contribute more to the development of the global nuclear energy industry, he said.

Second, Xi suggested the two countries deepen scientific and technological cooperation on nuclear energy by sticking to the driving force of innovation.

"Responding to climate change is a common task for all countries," Xi said, adding that China and Russia should promote more low-carbon cooperation projects and play a constructive role in achieving global sustainable development goals.

Noting that this year marks the 20th anniversary of the signing of the Treaty of Good-neighborliness and Friendly Cooperation between the two countries, Putin said Russia-China relations reached their best level in history. He added that the consensus reached between President Xi and himself has been well implemented with increasingly broader cooperation areas.

He said cooperation on the peaceful use of nuclear energy marks a significant part of the comprehensive strategic partnership of coordination for a new era between the two countries, and it is believed that the start of the four nuclear power units will not only inject new vitality into the further development of Russia-China relations but also help achieve the goals to peak carbon dioxide emissions and achieve carbon neutrality.

It will also contribute to coping with global climate change and realizing the sustainable development of humanity, Putin added.

After the Russian representatives reported to the two heads of state that the equipment is ready to be installed, President Putin issued the instruction "Start!"

The project was officially launched as the first tank of cement was poured at the construction site of the power plants.

Units 7 and 8 of the Tianwan nuclear power plant and units 3 and 4 of the Xudapu nuclear power plant are significant projects in a package cooperation deal on nuclear energy. It was signed with a witness by the two heads of state in June 2018. When completed and put into operation, the annual power generation will reach 37.6 billion kilowatt-hours, which is equivalent to reducing carbon dioxide emissions by 30.68 million tons per year.

Gavrilin Alexander, a Russian engineer, said he has been working on the Tianwan nuclear power plant since 2003 and highly anticipates that the construction of units 7 and 8 could be completed and put into operation at an early date. He said the new units are "much more powerful, advanced, and safer."

The construction of nuclear power plants is technology-intensive, which requires both sides to mutually cooperate with sincerity and solidarity. "It reflects the deep friendship and mutual trust between the two countries," Gavrilin Alexander said, adding that he believed China-Russia nuclear energy cooperation will achieve win-win results.

Deng Hao, secretary general of the China Center for Shanghai Cooperation Organization Studies, said with an increase in complementary trade between the two countries, the nuclear energy projects will further consolidate the material foundation of bilateral cooperation and enhance the trade and economic exchanges between China and Russia.

The event on Wednesday is also the first online bilateral exchange at the head-of-state level between the two sides since the beginning of this year. It is of great significance in guiding the China-Russia comprehensive strategic partnership of coordination for a new era to maintain high-level development, spokesperson Zhao said.

In recent years, the world has slowed down the pace of building new nuclear power plants. Experts believed that China-Russia nuclear energy cooperation will become a highlight in the global nuclear power industry and help boost worldwide confidence in this energy development.

"It also shows China's firm determination to peak its carbon dioxide emissions and achieve carbon neutrality, and its commitment as a responsible major nation," he added.