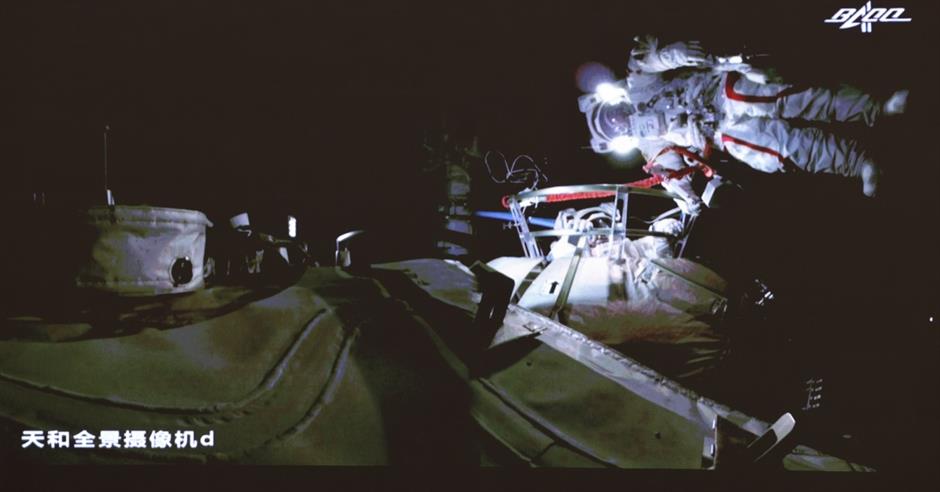 "I am impressed by the achievements of the Chinese National Space Administration and its leaders, engineers, and astronauts in the first steps of the assembly of this new space station on Earth orbit," said Claude Nicollier, the first Swiss citizen to venture into space and a honorary professor at Swiss Federal Institute of Technology Lausanne.

"Spacewalking is a difficult discipline, from a technical and operational point of view. The success of this particular spacewalk, the first one since 2008 by Chinese astronauts, is an important achievement in view of the further assembly of the orbiting laboratory," said Nicollier.

Recalling his four spaceflights between 1992 and 1999, Nicollier attributed his "most vivid and positive memories" to the two visits he paid to the Hubble Space Telescope for maintenance and repairs on-orbit.

Nicollier expressed "deep satisfaction" for keeping Hubble in good working condition on account of Hubble's "contribution to many areas of knowledge in astronomy."

Similarly, for the Swiss astronaut, the most exciting feature of the Tiangong space station is its future optical telescope capsule Xuntian, which will fly in the same orbit as the space station and provide observation data for astronomical and physical studies.

"I know that there is a plan to install a Hubble-type orbiting telescope in the vicinity of the Tiangong Station, and to perform first class scientific work with this telescope that will be periodically serviced, and repaired if needed, from the station. This is a very clever concept as it will provide relatively easy access to this telescope to keep it operational," he said. "I would love to be part of this program as an astronaut, and as a former astrophysicist!"

Convinced that outer space is a global common good, China has been collaborating extensively with European nations since the launch of its manned spaceflight programs in the 1990s.

"Collaboration between several nations in any large-scale technical and scientific project is always good," said the Swiss astronaut. "I look forward to seeing more Sino-European collaboration in space, and I am convinced it will happen, and intensify!"

Nicollier identifies Artificial Intelligence as a key area in next-generation space international cooperation. "Scientific activities in space are complex, and station maintenance can be very laborious and crew-time intensive," he said. "It is best to leave a lot of these tasks to smart robots, and just use the human capability where it is really needed!"

Nicollier also highlights the importance and possibility of extensive collaboration with China.

"China has achieved a lot in the field of astronomical observatories, including the largest, Earth-surface located radio telescope. I see a huge potential in collaboration with China in this field of research," he said, referring to China's Five-hundred-meter Aperture Spherical Radio Telescope (FAST), opened to global scientists since March.

Drawing from his personal experience in spacewalks, Nicollier shared a personal message to Chinese taikonauts. "I would like to wish the three Chinese astronauts onboard the Tiangong station a successful continuation of their mission, and I congratulate them on their achievements!"