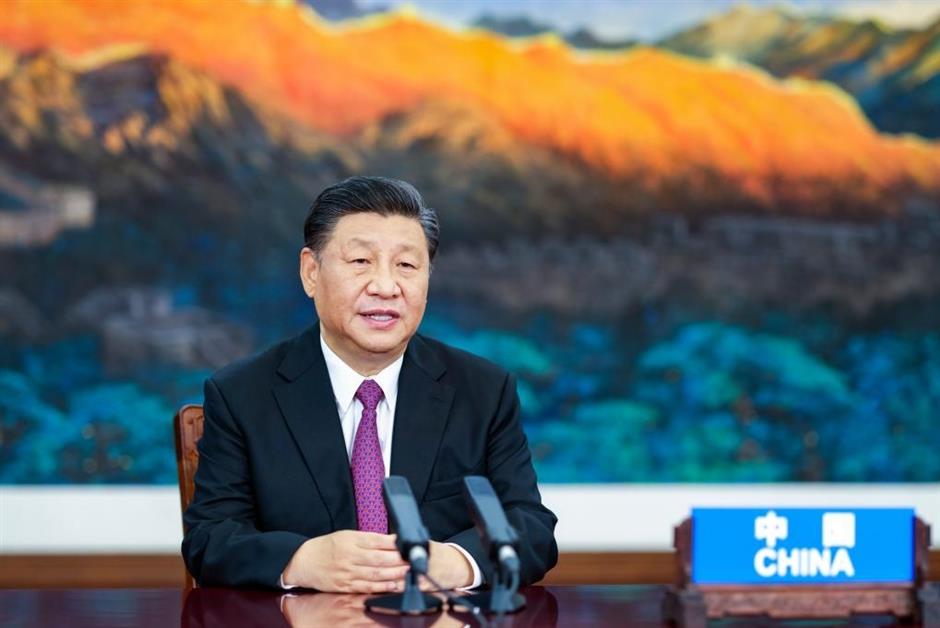 Addressing the Informal Economic Leaders' Retreat of the Asia-Pacific Economic Cooperation (APEC) on Friday, Chinese President Xi Jinping called upon its members to enhance solidarity and cooperation to overcome the impact of COVID-19 and boost global economic recovery.

"Let us stand with each other in solidarity, promote anti-COVID cooperation and economic recovery, and work for a bright future of prosperity for all in the Asia-Pacific," said Xi.

The attending APEC members have committed themselves to realizing the Putrajaya Vision of an open, dynamic, resilient, and peaceful Asia-Pacific community by 2040 for the prosperity of all their people and future generations, according to a statement released after the meeting.

"The pandemic proves once again that we live in one global village, where countries stand to rise and fall together," said Xi. He urged solidarity and cooperation to go through this difficult time and jointly work for a healthier and brighter future for humanity.

As of Friday, there were more than 188 million confirmed cases of COVID-19 infections, the World Health Organization said. For the Asia-Pacific region and beyond, the twists and turns of the pandemic, including constant mutations of the virus, pose challenges to economic development and people's livelihood.

To ensure affordability of and accessibility to COVID-19 vaccines, a powerful weapon to defeat the virus, China has pledged to make vaccines a "global public good." Overcoming the challenges of its own mass vaccination program, China has so far provided more than 500 million doses of vaccines to other developing countries.

China will provide another 3 billion US dollars in international aid over the next three years to support COVID-19 response and economic and social recovery in other developing countries, Xi said.

"China will take an active part in cooperation initiatives to keep vaccine supply chains stable and safe and support the movement of essential goods, and take effective measures to ensure healthy, safe and orderly people-to-people exchanges," the Chinese president added.

Xi also mentioned China financed the founding of a Sub-Fund on APEC Cooperation on Combating COVID-19 and Economic Recovery.

"Countries should avoid a 'low-lying land' of pandemic response. China has demonstrated responsibility as a major country to rally forces, join hands with others in weathering difficulties, and make concrete contributions," said Su Xiaohui, a researcher with the China Institute of International Studies.

Noting opening-up and integration is the "prevailing trend," Xi called for the liberalization and facilitation of trade and investment and upholding the multilateral trading system with the World Trade Organization at its core.

The APEC is a group of mostly open trading economies. It is hence a top priority for members to uphold free trade and oppose protectionism, said James Laurenceson, director of the Australia-China Relations Institute from the University of Technology Sydney.

Xi urged stepping up macroeconomic policy coordination, minimizing negative spillovers, and promoting regional economic integration, with a view to establishing a high-standard Free Trade Area of the Asia-Pacific at an early date.

"China is among the first to ratify the Regional Comprehensive Economic Partnership (RCEP) agreement," Xi said, adding that "We look forward to its entry into force this year."

As China has been taking concrete steps to further open up to the world and promote trade liberalization in the region, it is also working for a community with a shared future for the Asia Pacific by earnestly pursuing multilateralism, said Su.

"The digital economy is an important area for the future growth of the world economy," he said.

He called on APEC members to further develop digital infrastructure, facilitate the dissemination and application of new technologies, and work for a digital business environment that is open, fair, and non-discriminatory.

Echoing China's stance on promoting green growth, Singapore's Prime Minister Lee Hsien Loong said Singapore is a small country vulnerable to climate change impacts. It is, therefore, willing to work with other countries to reach a consensus on the development of the green economy and strengthen environmental governance.

A responsible stakeholder in countering climate challenges, China has pledged to strive to peak carbon dioxide emissions by 2030 and achieve carbon neutrality by 2060. To this end, China has been taking concrete actions, and the country's national carbon market started trading on Friday.

As an increasing number of countries have committed themselves to green development, China's drive for sustainable growth will provide more opportunities for green energy industries, and inject impetus into ensuring a promising prospect for generations to come, said Bambang Suryono, chairman of Indonesia's Asia Innovation Study Center.