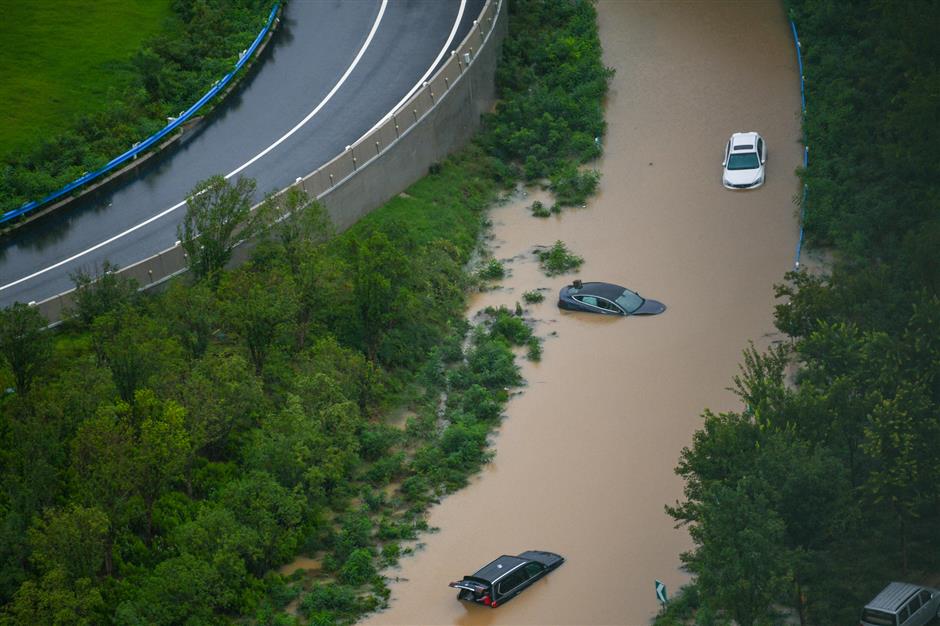 Vehicles are submerged in flooded water in Zhengzhou, Henan Province, on July 21, 2021.

So far, 12 people have been confirmed dead as a result of torrential rain in the downtown area of Zhengzhou, the provincial capital. At approximately 6 pm Tuesday, Zhengzhou Metro halted all its services, after many areas of the city suffered severe waterlogging.

Meanwhile, more than 160 trains at Zhengzhou East Railway Station were suspended, with a large number of passengers stranded. 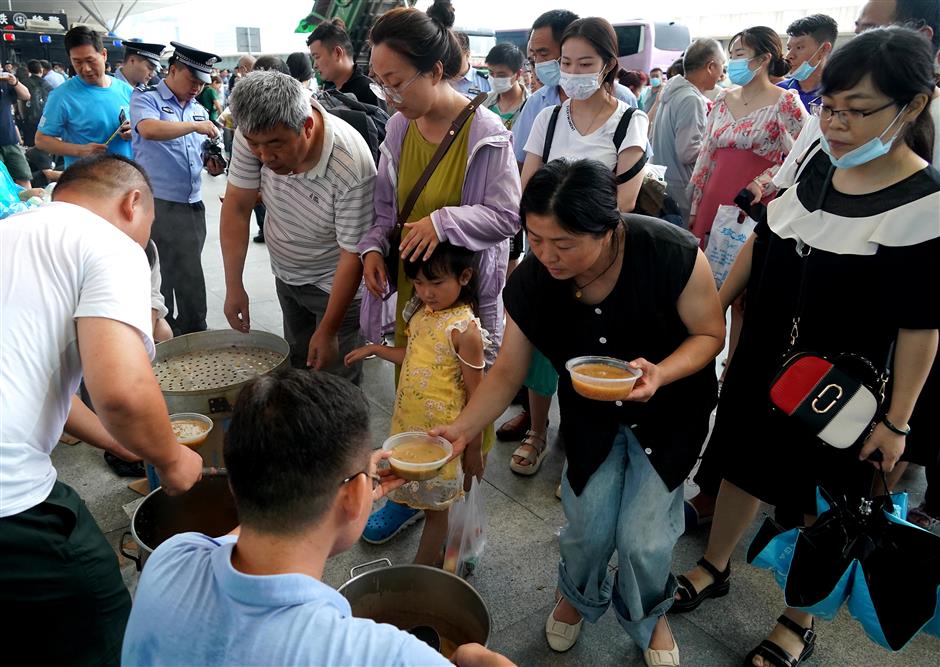 Passengers stranded at Zhengzhou East Railway Station are given free breakfast this morning.

From July 16 to 3pm on Tuesday, torrential rain affected over 280,000 residents of Henan's 31 counties and districts, and 14,680 people were relocated to safe places. Rainwater has damaged approximately 20,000 hectares of crops.

Mihe Township in Gongyi City, which is administered by Zhengzhou, has been flooded by heavy rain, with over 20,000 people affected. Further rescue work and search for the missing are underway.

Heavy rains were recorded at 794 meteorological stations in the province, including five national meteorological observation stations that reported the highest daily rainfalls since weather records began in Henan.

The city registered 201.9 mm of precipitation from 4pm to 5pm on Tuesday, a record hourly high for Chinese mainland. The city also broke its own single-day precipitation record, hitting its highest level since Zhengzhou's weather station was established in 1951. 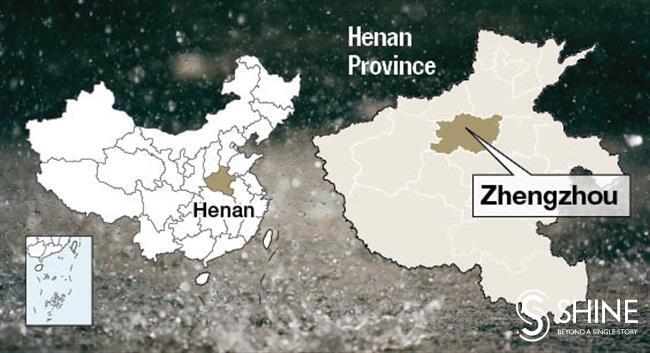 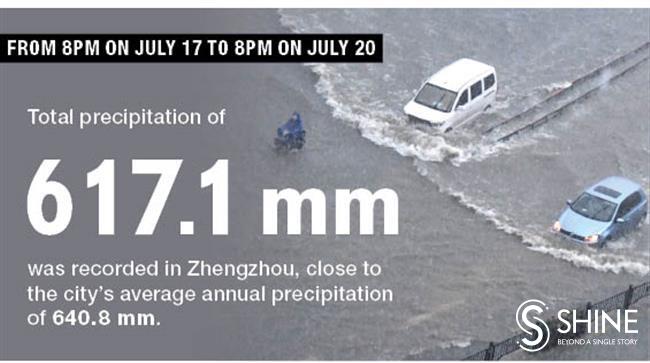 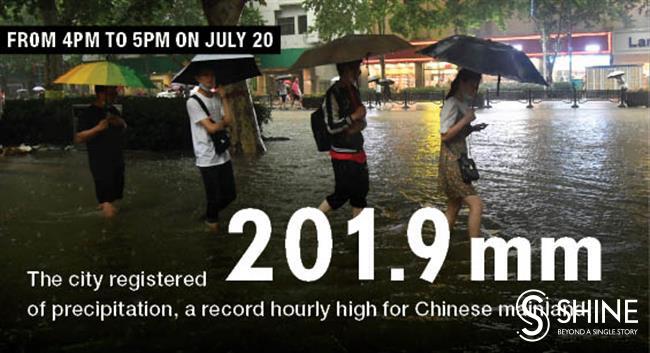 For four consecutive days starting on July 17, torrential rains have battered central and western areas of Henan Province and are expected to continue until Wednesday night, according to Zhang Ning, chief forecaster of the provincial meteorological observatory.

Zhang said that the special terrain on Henan's Taihang and Funiu mountains had uplifted the easterly air, causing heavy rainfall to persist in the mountainous western and northwestern areas of Henan.

The heavy rain has significantly increased the risk of mountain torrents and geological disasters in the mountainous western and northwestern regions of the province.

The water levels of small and medium-sized rivers and reservoirs in the Yellow River and Haihe River basins have risen rapidly, and large-scale urban waterlogging and farmland waterlogging have occurred. 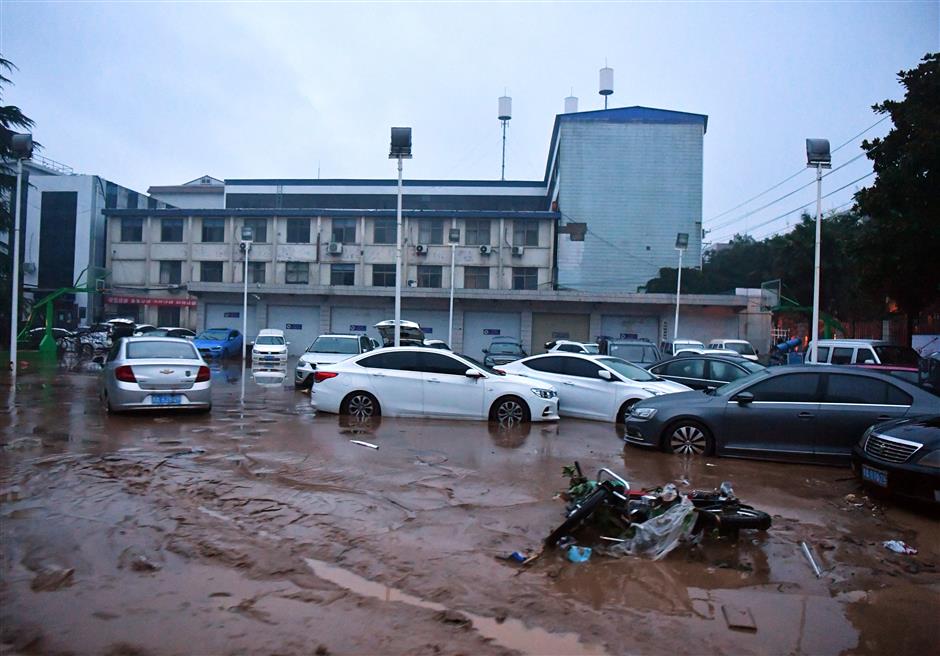 Mihe County government in Henan Province on July 21, 2021. Power and communication were cut off in Mihe County on Tuesday due to the strong rainfalls. 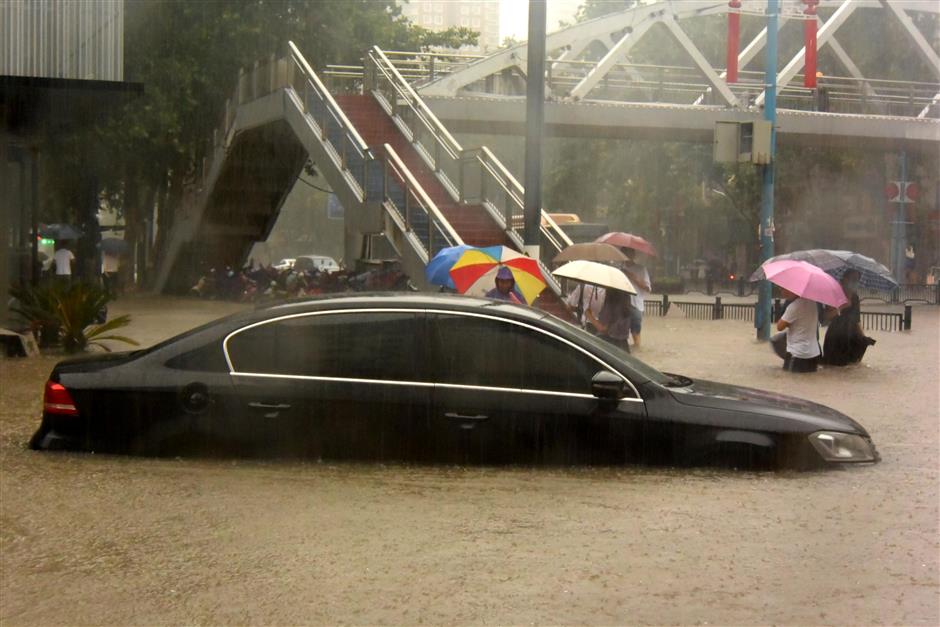 A car is submerged in the flooded water as people wade through waterlogged street in Zhengzhou, Henan Province, on July 20, 2021.

A rescue team of 1,800 firefighters has been deployed to the flood-hit region from seven neighboring provinces, together with boats, pumping vehicles and flood rescue kits.

China's national observatory on Wednesday morning renewed orange alerts for rainstorms, the second-highest alert in its color-coded weather warning system, in many parts of the country including Henan.

From Wednesday morning to Thursday morning, heavy rains and rainstorms will continue in Henan and its neighboring provinces, the observatory said. Parts of Henan and Hebei will see rainstorms with up to 280 mm of daily precipitation.

The observatory warned that some areas are likely to see over 70 mm of hourly rainfall, accompanied by thunderstorms and gales.

Traffic has been disrupted in up to 30 sections of national and provincial highways in Henan due to flooding and collapsed roads, according to the Ministry of Transport.

As of 7am on Wednesday, 26 expressways in the region have reported partial closures, but there are not currently high numbers of vehicles and travelers stranded, said the transport ministry.