Much of Zhengzhou, the capital city of central China's Henan Province, remained under water on Sunday, five days after "once-in-a-lifetime" torrential rains overwhelmed the city.

Heavy rains began to fall in the city of 12.6 million and its surrounds on July 20, causing extensive flooding and the deaths of 56 so far. Hundreds of thousands have been displaced.

Many residents have begun the cleanup in areas where the water has finally receded. In many instances that meant finding vehicles abandoned during the flooding.

Wu Tao, a construction worker, was hard at work trying to salvage his uninsured work van which was caught up in more than a meter of flood water. He finally managed to get back to the area Sunday.

"I've come to see if anything can be salvaged, but it doesn't look good," he said.

His van, usually used to transport workers to work sites, was completely filled with mud, which also coated the engine, making it impossible to drive. 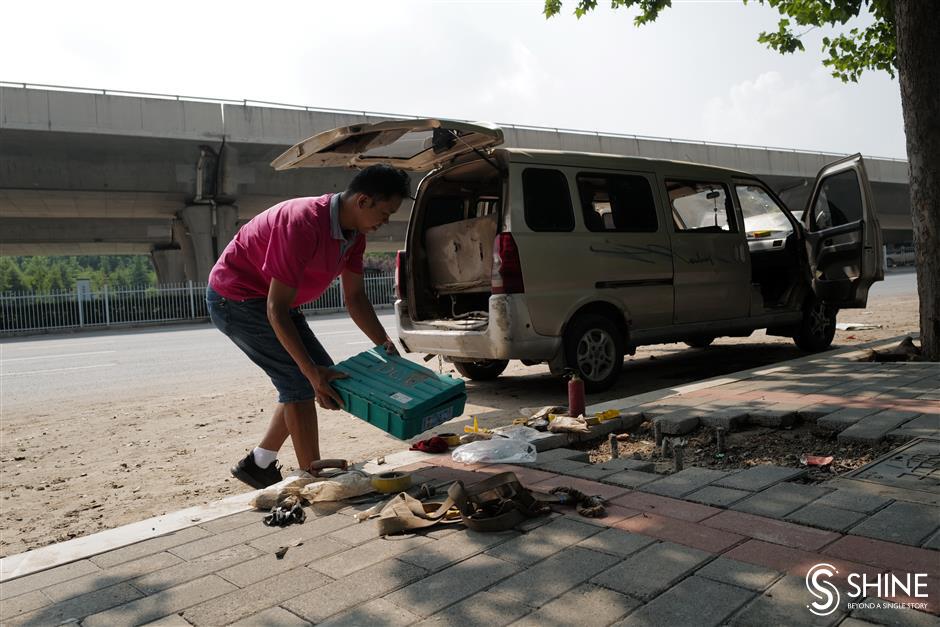 Wu Tao tries to repair his uninsured van in Zhengzhou on Sunday. The van was damaged when caught up in more than a meter of flood water during the flood.

He had pulled out and cleaned many of his work tools and a pair of sunglasses, which were all placed neatly on the side of the road to dry.

"I don't think this van will drive again, but I can take these tools," he said.

Wang Dengke, a dispatcher with Zhengzhou public transport, was across the road cleaning out their base, which just 24 hours earlier was under a meter of muddy water.

The floors were still covered in mud, and furniture had been placed outside to dry in the sun.

"We have done our best to clean up what we can," he said as we walked through their office and sleeping quarters, still covered in a layer of wet mud. 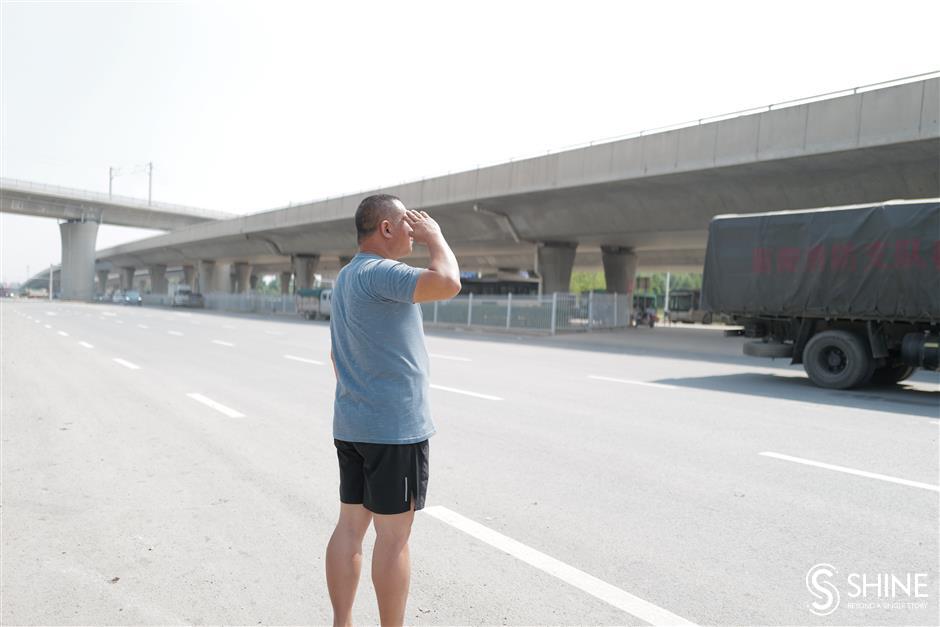 Wang Dengke, a dispatcher with Zhengzhou public transport, salutes to a military rescue truck passing by in Zhengzhou on Sunday.

"We still have no water or power so this is the best we can do, but we will remain at our post doing what we can."

Bunk beds with clean sheets and pillows perched atop muddy and wet floors. The team is camping out as the cleanup continues.

One member of staff was sitting at a desk in a room still filled with mud, working on administrative tasks.

Some 100 kilometers away in Xinxiang, Li Tongmei has been leading a team of elderly residents scooping up inches of mud that cakes the streets. The prefecture-level city of nearly 6 million was also hit hard by flooding, with many streets still under water. 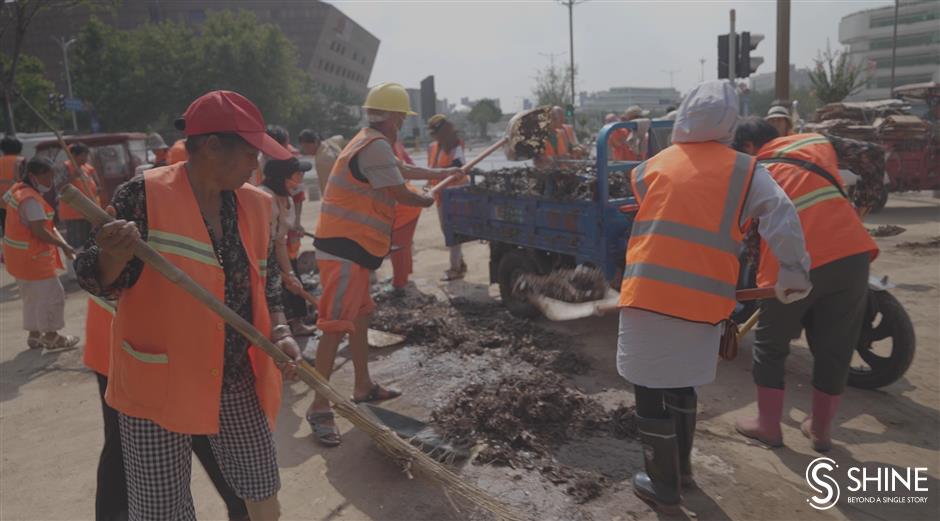 Li Tongmei (left) leads a team of elderly residents scooping up inches of mud that cakes the streets of Xinxiang, Henan Province.

"We're hungry and tired, but this is something that we must do," she told Shanghai Daily. "We eat when we can but we keep working, as we have done for the past few days."

Small, three wheeler bikes with trailers were being loaded up with soot and mud and carted off to a dumping location before heading back to pick up more.

The thirty or so elderly residents were in good spirits, with their team split into different roles. Some used shovels to scoop up the thick layer of mud, while others used brooms made of branches to sweep up debris.

"It's not tough work," another woman scooping up mud said as her face and body was covered in sweat. "We will move from street to street until there is nothing more to clean up."

The few streets of Xinxiang and Zhengzhou where the water has fully receded are filled with muddy and wet cars, doors, bonnets and hoods open to dry in the sun. Car owners have placed them there as a last hope at salvaging their means of transportation. 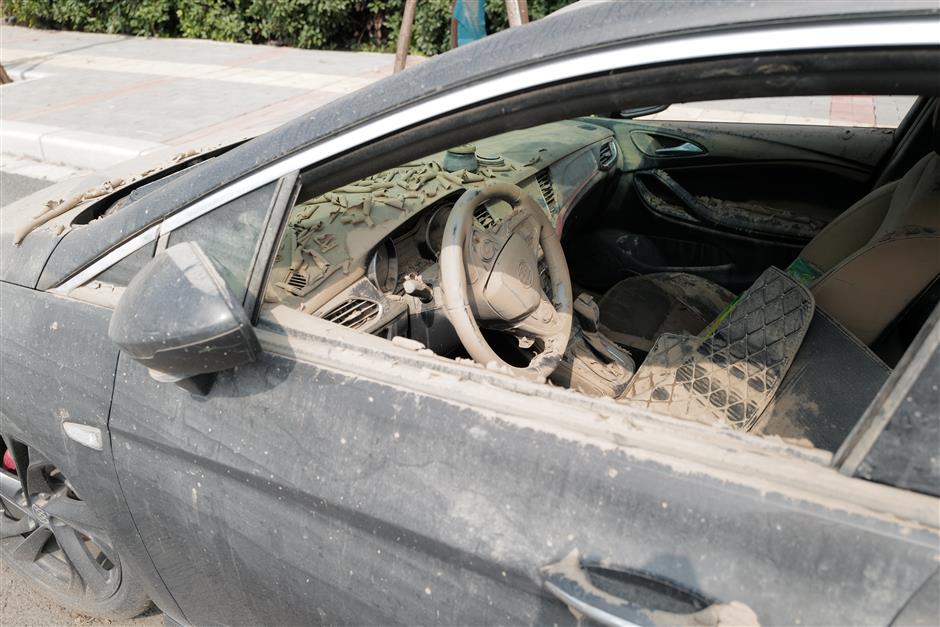 An abandoned car filled with mud is parked at the roadside in Zhengzhou on Sunday.