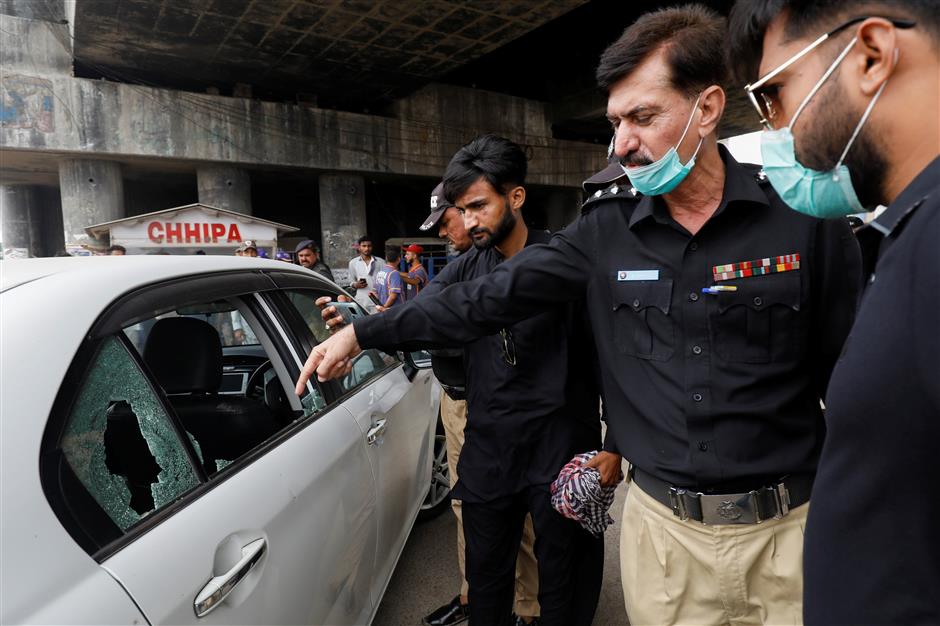 Pakistan security officials examine a vehicle that was carrying Chinese nationals in the port city of Karachi on Wednesday after two masked assailants on a motorbike fired at them. One Chinese national was wounded in the attack.

A Chinese national was shot and wounded in an attack in Pakistan's largest city Karachi on Wednesday, police said, two weeks after nine Chinese workers were killed when an explosion sent their bus over a ravine in the north of the country.

Local police said two masked assailants riding on a motorbike fired at a car carrying two Chinese nationals, who were working at a nearby factory in the city.

One of the passengers sustained an injury to his arm in that attack.

"He is stable as fortunately he was not hit on any vital part of his body," said Javed Akbar Riaz, the police chief of Karachi's southern district.

No one claimed responsibility for the attack.

"China is following this matter closely and the relevant case is still under investigation. We have full confidence in the Pakistan side's protection of Chinese citizens and property in Pakistan," he told a regular news briefing.

China is a major investor in Pakistan, pouring billions of dollars in recent years to boost the nation's infrastructure.

But various militants opposed to the Pakistani government have in the past attacked Chinese projects and citizens.

As many as 13 people, including nine Chinese nationals working on a dam project, were killed when their bus was hit by an explosion in Kohistan, northwest Pakistan, on July 14.

Pakistan initially blamed a mechanical failure but later said traces of explosives had been found and terrorism could not be ruled out.

The Chinese workers killed on the bus were employed at the Dasu hydroelectric project, part of the China-Pakistan Economic Corridor, a US$65 billion investment plan aiming to link western China to the southern Pakistani port of Gwadar.