China's COVID-19 outbreak in Fujian Province, which has reported 152 local cases in five days, has prompted cities in other parts of the country to issue travel warnings ahead of major holidays.

The travel warnings come ahead of the weeklong National Day holiday starting on October 1, a major tourist season, as well as a shorter Mid-Autumn Festival holiday next week.

Even though all new local cases in China since September 10 were reported in Fujian only, the northeastern city of Jilin, as well as Maoming and Guangzhou in the south, have advised people against non-essential trips out of their provinces. Shanxi and Heilongjiang provinces have also made similar advisories.

The cities of Chifeng and Hohhot in the northern autonomous region of Inner Mongolia have advised residents to stay put during the holidays, while Xi'an in Shaanxi Province told residents to avoid leaving town for unnecessary reasons.

The National Health Commission said on Wednesday that 50 new locally transmitted cases were reported for September 14, compared with 59 infections a day earlier. All of them were in Fujian.

That brings the total number of local infections in the three Fujian cities of Putian, where the outbreak began, Xiamen and Quanzhou to 152.

About 30,000 people traveled from Putian to other provinces between August 26 to September 10, state television reported on Wednesday citing estimates from health authorities.

Zeng Shidian, director of Disease Control and Prevention Center in Wenzhou, in Zhejiang Province north of Fujian, was cited as saying in local media that there is a "high" risk of the city seeing some imported cases from Putian and other parts of Fujian due to the movement of people and goods.

Wenzhou is urging its residents not to travel to Fujian during the upcoming holidays. The city said on Tuesday it will close indoor entertainment venues for half a month. 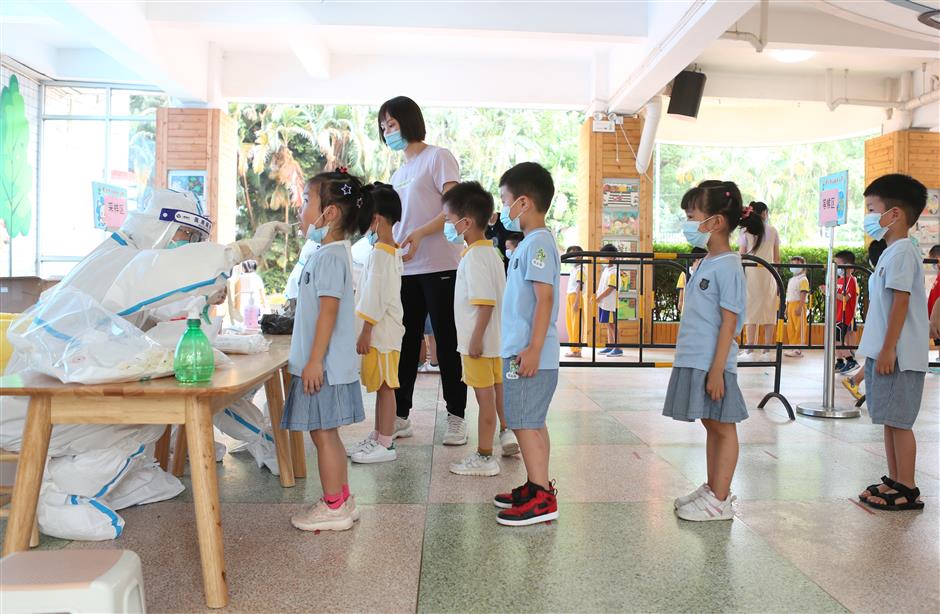 Children are tested for coronavirus in a kindergarten in Quanzhou, Fujian, on Wednesday.

The outbreak in Fujian includes infections among unvaccinated students in at least four primary schools and two kindergartens, data from local authorities showed.

China has fully vaccinated 91 percent of students aged 12-17 against the coronavirus, the Ministry of Education said on Wednesday, although authorities said schools need to be vigilant.

Wang Dengfeng, an education ministry official, told state television that students and teachers were being encouraged to stay put during the upcoming holidays.

The education ministry said in a statement that schools should not be complacent and implement anti-COVID measures in a more efficient and targeted manner.

China's two vaccines have been approved for use in children from the age of 3 but authorities in charge of the vaccination rollout have yet to make children under 12 eligible.