Among those hospitalized, three were seriously injured, according to local emergency management bureau.

According to the China Earthquake Networks Center, the 6.0-magnitude earthquake struck at 4:33am at a depth of 10 kilometers in Luxian, a county in the city of Luzhou.

China Earthquake Administration has dispatched a work team to guide on-site disaster relief work. A total of 890 commanders and fighters from nearby fire-fighting and rescue brigades have been mobilized, while another 4,600 rescue workers are on standby. 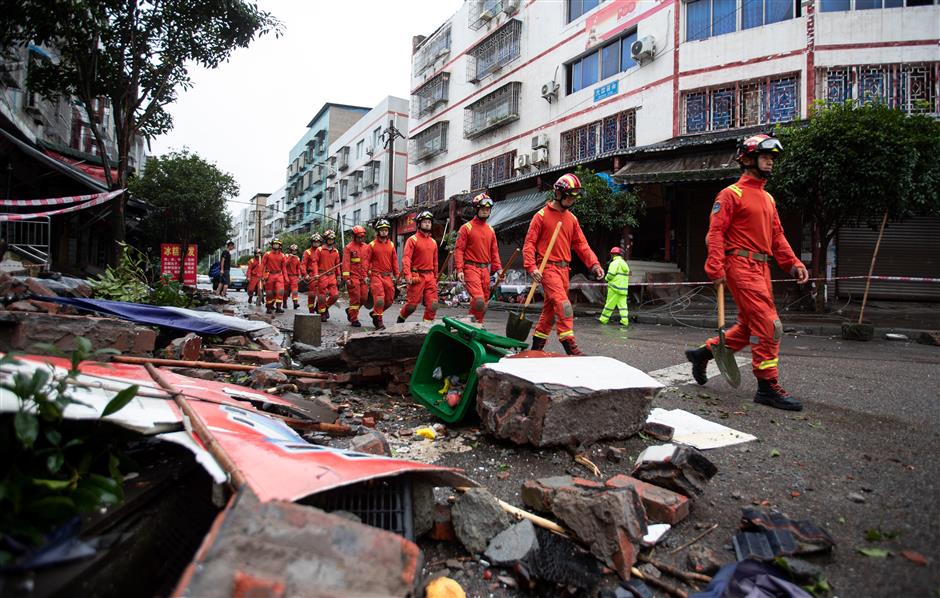 Rescuers reach Luxian in Sichuan Province after it was rocked by an earthquake.

Collapsed walls and houses were seen on the way to rain-battered Jiaming Township in the epicenter area.

Electricity in most of the houses in the town has been suspended. Shelves of shops that fell off in the tremors, lay scattered along the street. Residents were seen cleaning up the cluttered scene.

Amid heavy rain in Fuji Township, rescue workers were going door to door searching for people in the damaged houses and moving them to temporary shelters. At the shelter, workers were distributing mooncakes and other food items to the affected people.

More than 6,900 affected residents have been relocated, and over 10,000 people have been moved to temporary shelters. The earthquake relief headquarters of Sichuan has activated a level-II response, the second-highest in China's four-tier earthquake emergency response system.