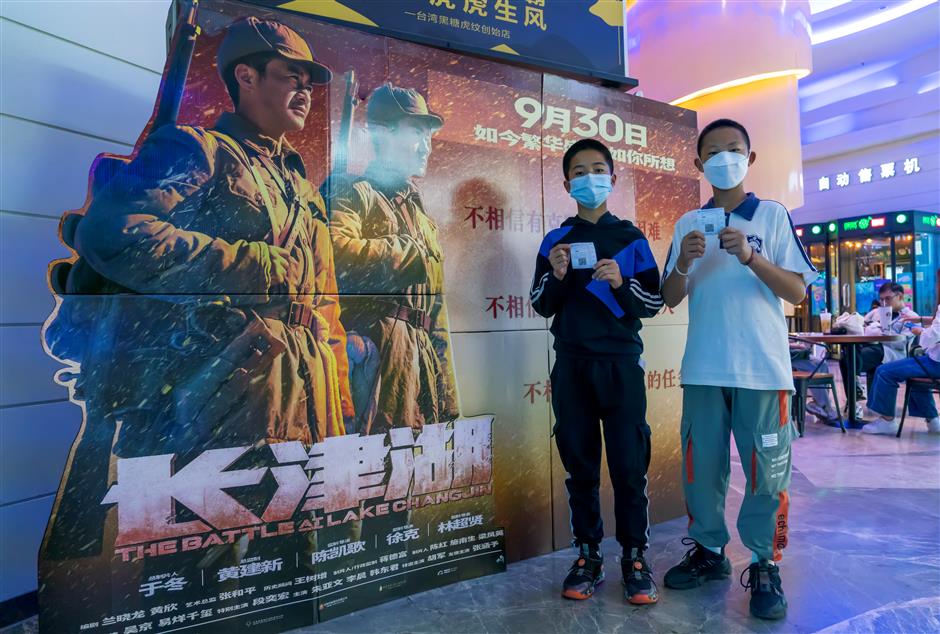 Filmgoers pose in front of a giant poster advertising "The Battle at Lake Changjin" in a cinema in Kunming, southwest China's Yunnan Province on October 1, 2021.

"The Battle at Lake Changjin," a historical epic bursting with patriotic zeal, has continued to smash Chinese box office records and ignited widespread patriotic passion among the Chinese public.

The war film saw its cumulative revenue surge past 1.9 billion yuan (about US$292.97 million) on the evening of Monday, its fifth screening day, according to data from box office tracker Maoyan.

Set in the War to Resist US Aggression and Aid Korea (1950-1953) and starring Wu Jing and Jackson Yee, the movie tells the story of Chinese People's Volunteers (CPV) soldiers fighting bravely in freezing temperatures in a key campaign at Lake Changjin, or Chosin Reservoir.

The story of how the young warriors were willing to risk it all to defend their motherland from the world's best-equipped army, despite their lack of food and warm clothing and amid the bitter coldness, has moved many moviegoers to tears.

On China's social media platforms, Internet users have been quoting late Chairman Mao Zedong's phrase, "Strike one punch to avoid a hundred punches," to show the importance of the CPV's victory to ensuring peace in New China over the past seven decades. Many have said that the heroes should always be remembered and that peace should be cherished.

With a daily revenue of over 400 million yuan for a third consecutive day on Sunday, the blockbuster broke China's daily box office records for both war films and historical films, according to film data platform Beacon.

"Watching the film brought tears to my eyes," wrote an Internet user on the microblogging site Weibo. "The real war in history was far tougher than what's depicted in the movie and we should all cherish the peace that our revolutionary forefathers sacrificed their lives for."

This comment was echoed by Wang Qiang, a resident of Tonghua, northeast China's Jilin Province.

"My grandpa, who fought in the war, often told me about his experience of living on frozen potatoes on the frontline," said Wang. "After watching the film, I'm more grateful for today's happy life, which didn't come easy."

Wang Yichuan, a professor at Beijing Normal University, said the film depicts the solidarity and bravery of the Chinese people and the heroism of the CPV soldiers.

"The most important thing is that it provides an answer to why we Chinese needed to fight the war, because, 'If we don't fight it, our next generation will have to fight it,'" said Wang, quoting a line delivered by a CPV soldier in the movie.

"The Battle at Lake Changjin" and the patriotic anthology "My Country, My Parents" have both been well-received since their formal releases on September 30, the last working day before the weeklong National Day holiday. The holiday, which begins on October 1, is usually a lucrative moviegoing period in China.

The robust growth of ticket sales for the two films, with a combined revenue of more than 2.6 billion yuan as of early Monday evening, drove China's 2021 box office total to top 37 billion yuan to date.

Maoyan forecasted that "The Battle at Lake Changjin," which now has a rating of 7.6 out of 10 on review platform Douban, would complete its China box office run with total takings of 5 billion yuan, and that "My Country, My Parents" would finish its run with over 1.5 billion yuan.

To film industry observers, the latest war blockbuster represents Chinese filmmakers' new explorations of the war genre, and has pushed the country's film industrialization level to a new high.

With a running time of nearly three hours, "The Battle at Lake Changjin" was jointly helmed by three top directors – Chen Kaige, Hark Tsui and Dante Lam – rare in the Chinese filmmaking industry.

As many as 7,000 crew members and over 80 special effect production companies were involved in the film's making.

On Martyrs' Day, September 30, the crew visited the CPV martyrs' cemetery in Shenyang, Liaoning, to pay tribute to China's martyrs.

"It was the hardest filming experience of my career," said Wu Jing, who played the leading role. "By hard, I don't mean physically, but the pain I felt in my heart when I imagined the CPV soldiers bearing hardships."

"I'm determined to make it a great movie to see that CPV soldiers are known and remembered by more people, which is what they deserve from us," the renowned actor said.

"The Battle at Lake Changjin" is intended for young people not only today but also those 50 years in the future, said the film's producer Yu Dong, according to an article from China Film News.