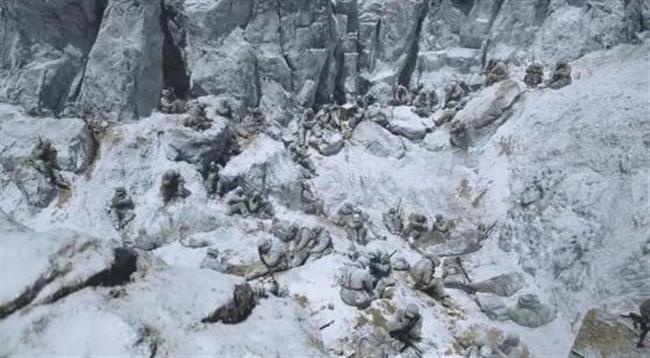 The soldiers stay put in freezing temperatures in a scene from the war epic movie "The Battle at Lake Changjin."

Prosecutors in Sanya City, Hainan Province, have launched an investigation into Web influencer Luo Changping for allegedly insulting the martyrs of the Chinese People's Volunteers army during the Korean War (1950-53) in an online post.

According to the official WeChat public account of Hainan Procuratorates, the Sanya Suburban People's Procuratorate found Luo published a post on microblogging platform Sina Weibo on October 6, insulting the CPV martyrs. The martyrs held on amid temperatures of minus 40 degrees until frozen to death, like "ice sculptures" during the war, also known in China as the War to Resist US Aggression and Aid Korea.

The prosecutors said his insulting comments infringed the reputation and honor of the martyrs, hurt the feeling of the public who love and respect them, and seriously harmed social public interests.

Insulting and defaming heroes and martyrs constitutes a crime in China, according to an amendment to the Criminal Law that went into effect on March 1. Serious offenders will be sentenced to a maximum of three years imprisonment.

The procuratorate decided to investigate Luo, an ex-journalist, on Friday.

That happened shortly after police in Sanya detained Luo, 40, on suspicion of infringing the reputations and honor of heroes and martyrs. His Weibo account has been shut down.

Heroes of the "ice sculpture infantry company" were featured in the recent blockbuster film "The Battle at Lake Changjin."

The movie tells the story of the soldiers fighting against the US army bravely under freezing temperatures in a key campaign at Lake Changjin, or Chosin Reservoir.