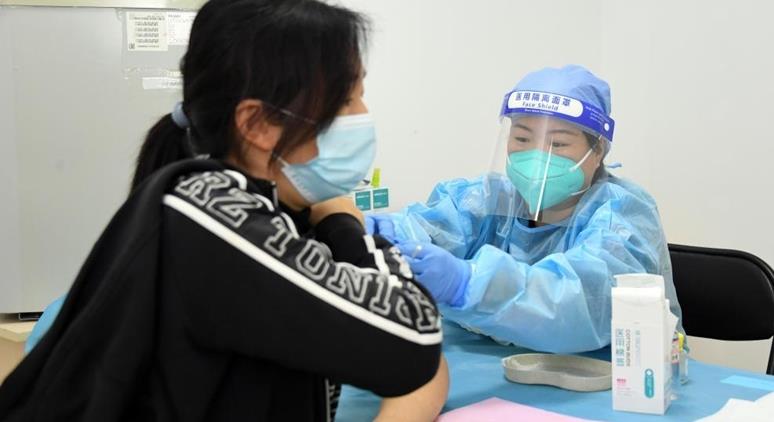 A medical worker administers a booster shot of the COVID-19 vaccine to a woman at a vaccination site in Xicheng District of Beijing, capital of China on October 17, 2021. Beijing has begun to offer a third COVID-19 booster vaccine to people of higher risks in some neighborhoods.

Beijing on Thursday reported one newly confirmed COVID-19 case linked to the recent epidemic flare-up in northwest China, which has been identified as caused by the Delta variant, local health authorities said. The capital city has launched booster shot services for residents, targeting key groups including people going abroad and staff working at ports and medical services.

The new case reported on Thursday is the wife of a previously confirmed patient, who both lived in Fengtai district, noted Pang Xinghuo, a deputy director of the municipal center for disease prevention and control, at a press conference.

The woman was put under quarantine on Tuesday, and experienced discomfort in the throat the next day. A nucleic acid test later returned positive and she was then transferred to a designated hospital for further treatment, where she was diagnosed as a mild case of COVID-19.

Virus gene sequencing showed that the case in Beijing, which were caused by the Delta variant, shared the same transmission chain with those found in northwest China's Shaanxi and Gansu provinces.

To improve the level of antibodies among its residents and better protect susceptible groups from contracting the virus, Beijing has already launched booster shot services for people aged 18 and over who had completed a full course of vaccination for six months, Pang said.

All districts in Beijing have begun to carry out the services, and the booster shots will give priority to key groups most exposed to the virus, including personnel working at ports, medical services, public security, transport and logistics, as well as those who intent to go abroad.

Beijing on Tuesday reported the first local COVID-19 infection in more than 70 days, who came in close contact with a positive case from northwest China's Ningxia Hui Autonomous Region on a train.

Two buildings in the residential community where the patient lives have been closed and residents are not allowed to leave, the Global Times learned from community management staff.