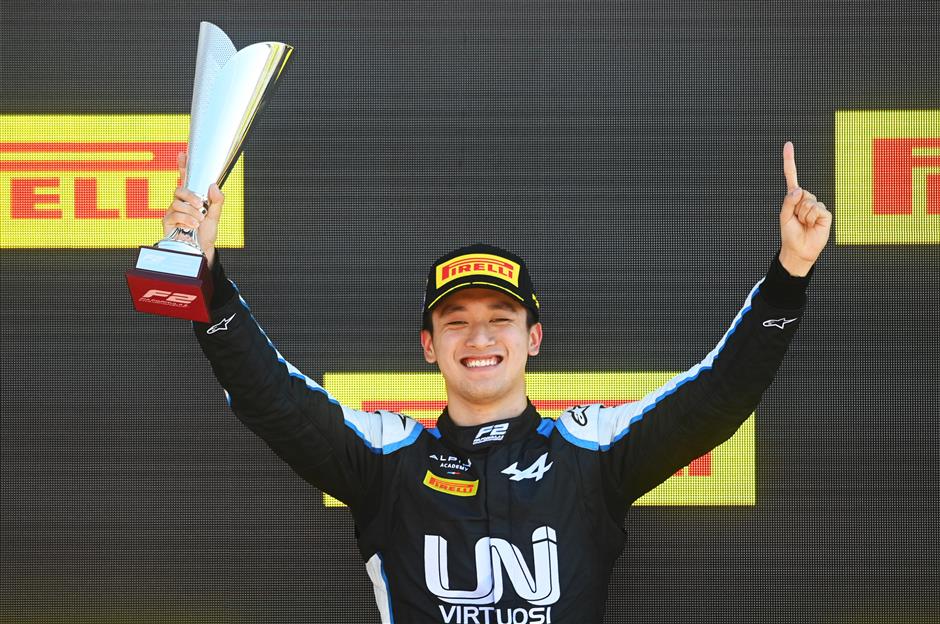 Zhou Guanyu celebrates his victory at the podium during the 4th round of the 2021 FIA Formula 2 Championship from from July 16 to 18, 2021 on the Silverstone Circuit, in Silverstone, United Kingdom

Zhou Guanyu will become China's first-ever Formula One driver after Alfa Romeo announced yesterday the 22-year-old would drive for the team in the 2022 season.

The Shanghai-born driver has been making waves in Formula Two this season and will team up with Valtteri Bottas, who will be moving from Mercedes.

"To be the first-ever Chinese driver in Formula 1 is a breakthrough for Chinese motorsport history," said Zhou. "I know a lot of hopes will be resting on me and, as ever, I will take this as motivation to become better and achieve more."

Zhou's promotion came as Alfa Romeo announced that Italian driver Antonio Giovinazzi would leave at the end of the 2021 championship in December.

Alfa Romeo described its new signing as "a trailblazer who will write a pivotal page of his country's motorsport history."

Zhou has already had a taste of F1 as a test driver for Alpine and has long been mentioned as making the step up from F2.

"I dreamt from a young age of climbing as high as I can in a sport that I am passionate about and now the dream has come true," Alfa Romeo quoted Zhou, who was educated in Britain, as saying. "It is a privilege for me to start my Formula 1 racing career with an iconic team, a team that has introduced so much young talent into Formula 1 in the past. Now the dream is reality."

F1 chief executive Stefano Domenicali said the signing was "fantastic for the sport and millions of passionate Chinese fans that now have a home hero to cheer all year long."

"Zhou is an incredible talent, who will be a fantastic addition to the amazing grid we have and he will entertain and keep all our Chinese fans excited in 2022," he said.

"The decision is crucial for the future of the company," said Alfa team principal Frederic Vasseur, whose team is ninth out of 10 in the constructors' standings.

"It was not only based on the fact that he is Chinese but it will be a mega-push for the company, for sponsors and I think also for F1 in general," he said.