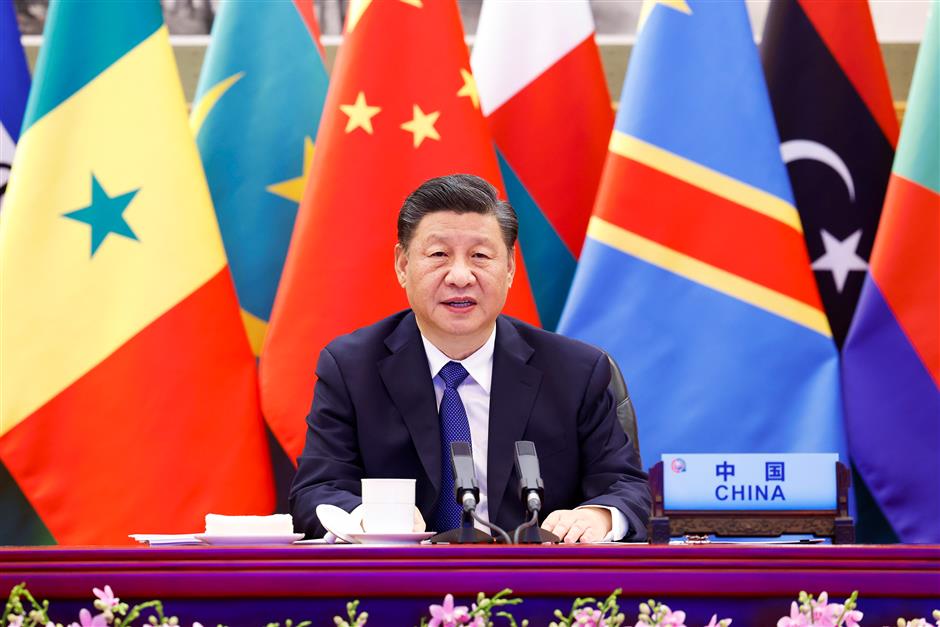 Chinese President Xi Jinping delivers a keynote speech at the opening ceremony of the Eighth Ministerial Conference of the Forum on China-Africa Cooperation via video link in Beijing, capital of China on November 29, 2021.

"I am convinced that the concerted efforts of China and Africa will make this FOCAC Conference a full success, one that shall pool the mighty strength of the 2.7 billion Chinese and Africans and guide us toward a high-level China-Africa community with a shared future," Xi said while addressing the opening ceremony of the Eighth Ministerial Conference of the Forum on China-Africa Cooperation via video link.

The conference, scheduled for November 29-30 in Senegal's capital of Dakar, is expected to evaluate the implementation of the outcomes of the 2018 FOCAC Beijing Summit and open up new prospects for China-Africa cooperation.

To help the African Union achieve its goal of vaccinating 60 percent of the African population by 2022, President Xi announced that China would provide another one billion doses of vaccines to Africa, including 600 million doses as donation and 400 million doses to be provided through such means as joint production by Chinese companies and relevant African countries.

By November 12, 2021, China had provided over 1.7 billion doses of COVID-19 vaccines to more than 110 countries and organizations, including 50 African countries and the AU Commission.

Cavince Adhere, a Kenya-based international relations scholar, said the COVID-19 pandemic has served to highlight the strong partnership between China and Africa in the health sector.

"China now ranks as the top supplier of COVID-19 vaccines to Africa and a strong advocate for intellectual property liberalization to allow African countries to manufacture the commodities and further save their population and economies from the impacts of the global health crisis," Adhere added.

China and Africa have joined forces in confronting the grave challenge posed by COVID-19, further reinforcing their friendship, and the solidarity between the Chinese and African peoples has enabled them to overcome difficulties and obstacles and build a bright future, said Xu Bu, president of the China Institute of International Studies. 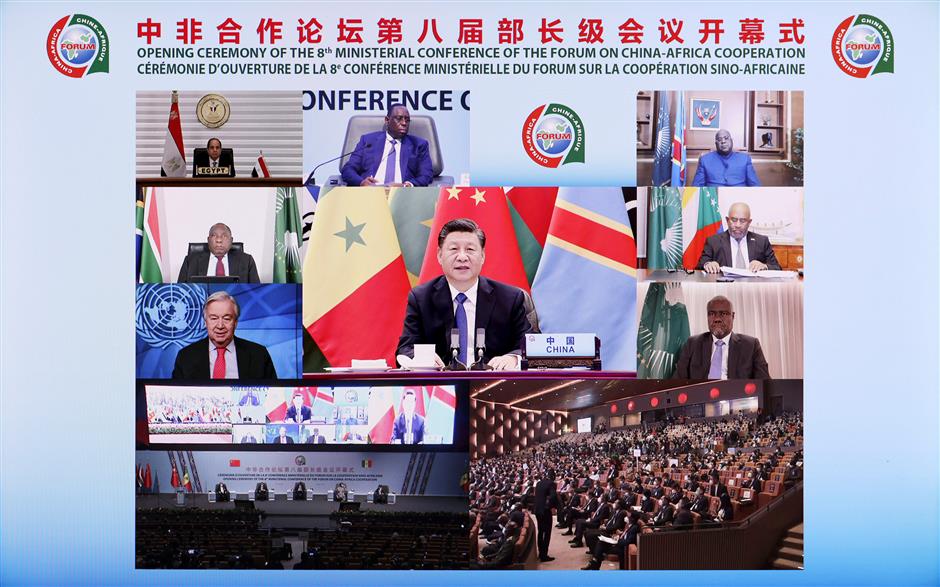 Chinese President Xi Jinping delivers a keynote speech at the opening ceremony of the Eighth Ministerial Conference of the Forum on China-Africa Cooperation.

"We need to open up new prospects for China-Africa cooperation, expand trade and investment, share experience on poverty reduction, strengthen cooperation on digital economy, and promote entrepreneurship by young Africans and the development of small and medium-sized enterprises (SMEs)," Xi said, calling for deepening practical cooperation between the two sides.

Xi said China would undertake 10 poverty reduction and agricultural projects for Africa, provide US$10 billion of trade finance to support African export, and build in China a pioneering zone for in-depth China-Africa trade and economic cooperation and a China-Africa industrial park for Belt and Road cooperation.

China would also encourage its businesses to invest no less than US$10 billion in Africa in the next three years, undertake 10 digital economy projects for Africa, undertake 10 green development, environmental protection and climate action projects for Africa, help build or upgrade 10 schools in Africa, and invite 10,000 high-level African professionals to seminars and workshops, Xi added.

China has been Africa's largest trading partner for the 12 years since 2009, and the proportion of Africa's trade with China in the continent's total external trade has continued to rise, exceeding 21 percent in 2020.

Buyile Matiwane, deputy-president of the South African Students Congress, said China is Africa's biggest source of foreign direct investment, and this kind of investment has been crucial in creating a platform to maximize the establishment of value chains and domestic markets, while improving the conditions for economic and social development across the African continent.

"The roads, airports, railways, ports, hospitals and all kinds of infrastructure being built by China will stand us in good stead for the development of intercontinental markets," Buyile Matiwane added.

At the FOCAC Beijing Summit held in September 2018, the two sides decided to build an even stronger China-Africa community with a shared future and lead China-Africa relations and cooperation into a new era.

At the opening ceremony of the Eighth Ministerial Conference of FOCAC, Xi put forward four proposals to build a China-Africa community with a shared future in the new era, calling on both sides to fight COVID-19 with solidarity, deepen practical cooperation, promote green development, and uphold equity and justice.

China and Africa have achieved mutual benefit and common development through practical cooperation, and they have always been a community with a shared future, Wu added.

Wu Chuanhua, an associate research fellow with the China-Africa Institute, said the China-Africa community with a shared future has become a model of sharing weal and woe, equal partnership, common security, common development, mutual learning among civilizations and green development.

Since the establishment of FOCAC 21 years ago, China and its people have cooperated with African countries and peoples based on the principles of friendship, unity, mutual trust and respect, Senegalese President Macky Sall said.

"It is also the principle that we should uphold in our vision for the future. Only in this way can we deepen the Africa-China partnership, promote sustainable development, and contribute to building a China-Africa community with a shared future in the new era," Sall said.