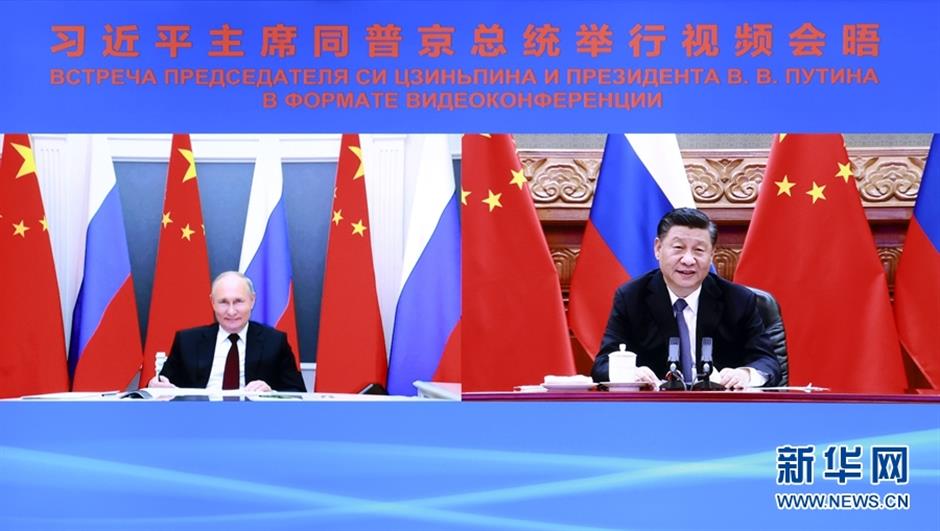 On behalf of the Chinese government and people, Xi extended sincere congratulations and best wishes to Putin and the Russian people.

Noting that the year of 2021 marked the 20th anniversary of the signing of the China-Russia Treaty of Good-Neighborliness and Friendly Cooperation, Xi said he and Putin jointly announced the extension of the treaty, and have led bilateral relations to robust development in the spirit of everlasting friendship and win-win cooperation.

The two sides have been committed to a four-point agreement on firmly supporting each other, with their political mutual trust growing ever deeper, he said, adding that they have also worked hard against the impact of the COVID-19 pandemic and achieved fruitful results in their all-round practical cooperation.

Xi noted that the China-Russia Year of Scientific and Technological Innovation program concluded successfully, bilateral trade reached a new high, and strategic major projects in such fields as energy, aerospace and connectivity have been advancing at a faster pace.

The Chinese president said he is deeply satisfied with the fruits of bilateral relations.

Noting that Putin will visit China and attend the opening ceremony of the Beijing Winter Olympics, Xi said he looks forward to keeping close contact with Putin through various means and jointly leading the China-Russia comprehensive strategic partnership of coordination for a new era to steady and sustained development.

He also called for concerted efforts to upgrade bilateral cooperation in various fields, inject stronger impetus into the two countries' respective development, and make greater contributions to building a new type of international relations and a community with a shared future for mankind.

For his part, Putin extended sincere greetings to Xi, and wished the friendly Chinese people happiness and good health.

He noted that the outgoing year marked the 20th anniversary of the signing of the Russia-China Treaty of Good-Neighborliness and Friendly Cooperation, which has laid a solid foundation for the development of bilateral ties.

The two countries conducted successful cooperation in 2021, he said, recalling that they carried out political dialogues at various levels, recorded a new high in bilateral trade, scored fruitful results in the Year of Scientific and Technological Innovation program, and maintained close and effective coordination on resolving major international and regional issues.

He said he is confident that with joint efforts, bilateral cooperation in various fields will achieve further development.

Expecting a successful Russia-China Year of Sports Exchange program, Putin said he firmly believes that Chinese friends will make a success of the Beijing Winter Olympics, and looks forward to meeting Xi as the grand sports event opens.

In his message, Li noted that the two sides successfully held the 26th regular meeting between their heads of government not long ago and reached a series of important consensuses.

He said he is willing to keep close working contact with Mishustin and work together to open a new chapter in, put a new look on and achieve new results in bilateral practical cooperation.

Mishustin recalled that the two countries made new arrangements on further boosting their practical cooperation in the 26th regular meeting between their heads of government.

He added that he looks forward to the two sides continuing to maintain constructive dialogue over issues of common concern, and wishes China success in hosting the Beijing Winter Olympics and Paralympics. Enditem