The national flag of China was raised in morning breeze on Monday under the iconic dome of the Al Wasl Plaza, the central stage of the Expo 2020 Dubai site, marking the start of the National Day of China Pavilion.

In the plaza decorated with traditional Chinese elements like the Chinese blessing knot, officials from China and the United Arab Emirates initiated an array of celebration activities showcasing the Asian country's cultural and sci-tech achievements.

As a much-anticipated event at the Expo starting on Oct. 1, 2021, the National Day of China Pavilion also represents the culmination of a chain of China-themed events running through the past three months that have dazzled visitors with splendid Chinese culture and cutting-edge technologies. 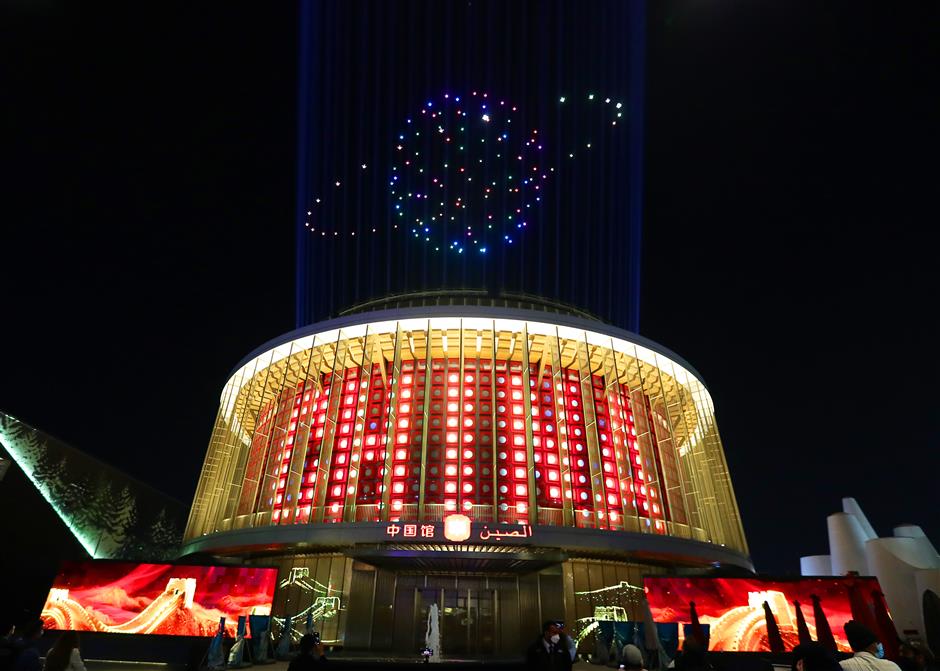 The China Pavilion in the Expo 2020 Dubai site.

The UAE is China's second-largest trade partner in the Middle East and hosts the largest Chinese community in the region, most of them in Dubai and Sharjah. The National Day of China Pavilion is hailed as an opportunity to advance bilateral ties.

At the opening ceremony, Chinese Ambassador to the UAE Ni Jian read a written speech sent by Chinese Vice Premier Hu Chunhua, in which Hu noted that the economies of China and the UAE are highly complementary, and the China-proposed Belt and Road Initiative (BRI) and the UAE's concept of "Revitalizing the Silk Road" are highly compatible, so the two sides have broad prospects for mutually beneficial cooperation.

China, Hu said, is ready to join hands with the UAE to further enhance political mutual trust and practical cooperation in various areas under the framework of the BRI, so as to enrich the comprehensive strategic partnership for the benefit of the two countries and their people.

In his speech, Assistant Minister of Foreign Affairs and International Cooperation for International Development Affairs Sultan Mohammed Al Shamsi said, "the UAE and China share a steadfast relationship, based on notions of friendship and respect, which has gone from strength to strength over the years."

Bilateral collaboration is strengthened under the BRI, in which the UAE has been a key and supportive partner, Al Shamsi added.

Performers walk on stage during the China Pavilion Day at the Dubai Expo 2020 in Dubai, United Arab Emirates, on Monday.

At the opening ceremony, Chinese artists wowed the audiences from different countries with fascinating performances.

"It's absolutely breathtaking," Khaled Al Hassan, a UAE visitor, told Xinhua after watching a tenor singing the Chinese song My Motherland and Me. "It definitely makes me want to learn about China because it is such a sophisticated and time-honored civilization."

Besides history and traditions, the pageantry of "China Day" also highlighted China's future-oriented technologies and innovations. Joining the artists at the opening ceremony was a China-developed orange robot mascot Opti which performed a specially choreographed dance routine to welcome visitors.

The one-meter-tall robot, developed by Chinese tech company Terminus Group, has the IQ of a five-year-old child with its built-in artificial intelligence algorithm and is able to provide services including food deliveries, information and guidance.

Apart from 50 Optis, smart solutions provider Terminus Group has also supplied the expo with another 152 Titan Series robots, providing convenience to visitors from across the world with Chinese high-tech.

Moreover, a spectacular light show performed with drones at the China Pavilion attracted hundreds every night. The show, powered by China's advanced technologies in drone manufacturing and the BeiDou Navigation Satellite System, is one of the most-watched performances at the Expo.

"I am very proud as a Chinese citizen to see this stunning performance," said Wu Zhengxi, a Chinese college student in Dubai.

"It tells a China story that is old and new at the same time. We are a nation that has a splendid history, yet we are also a nation with a future-oriented mindset," said Wu.

Under the theme of "building a community with a shared future for mankind -- innovation & opportunity," the China Pavilion has been a window to learn about China's sci-tech achievements as well as its dedication to a more connected world.

Chinese President Xi Jinping, in his video message for the China Pavilion, spoke highly of the significance of the Expo 2020 Dubai, calling on the people of all countries to work together, respond to the call of the times, strengthen global governance, pursue innovation-driven development, and advance the building of a community with a shared future for mankind, the Chinese vice premier said in the written speech.

Many visitors at the pavilion said while China's technological advancements have been stunning, they are also impressed by the sincerity and goodness China has conveyed towards the world through the exhibition.

A Pakistani visitor, who only gave his name as Aladdin, said he came to visit the China Pavilion for two reasons: first, China is a powerhouse for technological innovation; second, China has always been a solid defender of world order and justice.

Salman Mohammed, an Indian visitor, said the National Day of China Pavilion is an exciting event, and he has been waiting to visit the pavilion because China has made extraordinary achievements in technology, infrastructure, and economy.

With an area of 4,636 square meters and in the shape of a traditional Chinese festival lantern representing peace and happiness, the China Pavilion is one of the largest and most popular national pavilions at the Expo. It has received more than 800,000 visitors since it opened to the public.