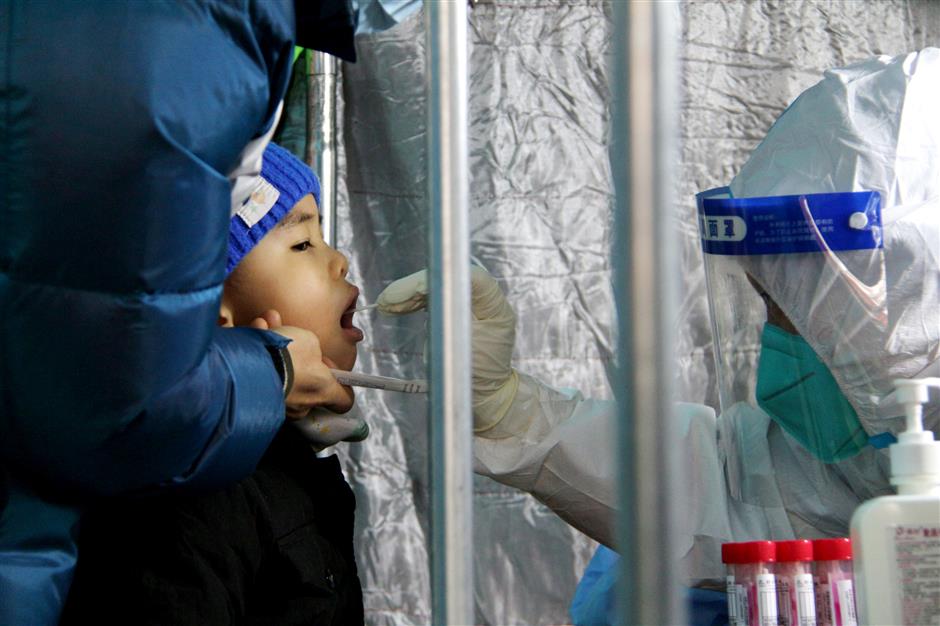 Nine locally transmitted cases with confirmed symptoms were found in Beijing on Saturday, down from 10 a day earlier, the National Health Commission said yesterday, adding that six of the nine were in the city's Fengtai District.

Of the nine confirmed infections, eight are mild cases and one is moderate.

Fengtai was to organize nucleic acid tests for COVID-19 for all residents on Sunday, district health authorities said in a statement.

The district has found a cluster infection and is facing the risk of community transmission, according to a statement by the district's COVID-19 epidemic prevention and control headquarters.

A residential compound in the district was also reclassified from medium-risk to high-risk on Saturday after the compound registered eight confirmed locally transmitted COVID-19 cases in the 14 days to noon on Saturday, said Li Ang, deputy director of the Beijing Municipal Health Commission.

As of midnight on Friday, residents of Fengtai had taken a total of 210,000 nucleic acid tests, with two positive results.

Bo noted that the district will strengthen its screening measures in key areas. Beijing urged all its local districts on Saturday to maintain "full emergency mode."

Since January 15, the city has reported a total of 27 confirmed local COVID-19 cases and seven asymptomatic cases. China had urged people to wear masks and gloves when opening mail, especially from abroad, after authorities suggested the first case of the Omicron variant of the coronavirus found in Beijing could have arrived via a package from Canada.

Elsewhere, the northeastern city of Harbin will conduct a city-wide exercise to test its roughly 10 million people for COVID-19 from today, although it has had no recent cases, calling it an pre-emptive move ahead of the long Lunar New Year holiday.

The city government said on its official WeChat account it had made the decision in view of how the week-long holiday, which officially starts on January 31, was a peak travel period for the country.

Cities across China have in recent weeks imposed tougher measures to control new outbreaks of COVID-19, a task that has also taken on extra urgency as Beijing prepares to host the Winter Olympics at the start of next month.

Many cities have advised residents to stay put or requiring travelers to report their trips days before their arrival.

Still, some state media outlets are warning against being too harsh, after a county-level government official in central Henan Province was quoted as saying that some people had ignored the advice to "maliciously return" to their hometown and that they would quarantine and detain such cases.

"It is human nature to return home during the Spring Festival for reunions, so why is it malicious?," the People's Daily newspaper said on its Weibo account on Saturday after the comments triggered heavy discussion on social media.

"Preventing and controlling the epidemic is a big task, but we cannot take a one size fits all approach ... (it) must be done in a scientific and legal way, and every desire to return home must be treated compassionately," the newspaper said.

The Chinese mainland reported 56 new COVID-19 cases on Saturday, down from 63 a day earlier.

The National Health Commission said that 19 of the new cases were locally transmitted, down from 23 a day earlier, and the rest imported.