Audi apologizes for text pirating in its promo video

A promotional video of Audi was accused over the weekend of copying text from a Douyin user's short video and the company apologized to actor Andy Lau who starred in the video and the Douyin user "Bei Da Man Ge" on Sunday night in an announcement.

The automaker said it is conducting an investigation and will remove the video from its platforms. 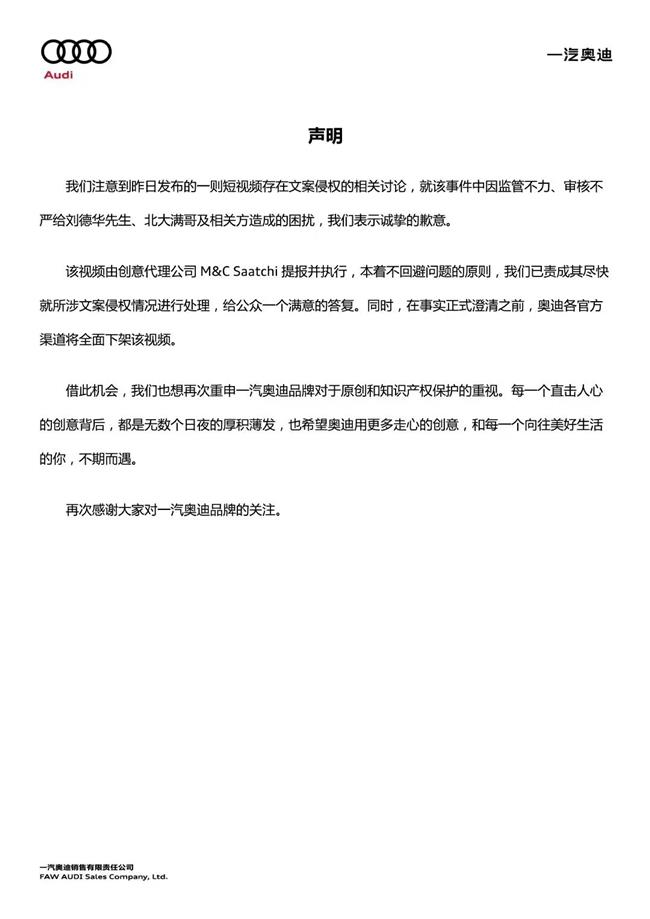 Audi made an announcement on Sunday night and apologized to actor Andy Lau who starred in the video and the Douyin user "Bei Da Man Ge."

On Saturday night, Bei Da Man Ge, who has more than 3.7 million followers on Douyin, claimed the text in the video is the same as a video he released on the same day last year. He provided an interpretation of Xiaoman in the video and wrote a poem, both of which were used in Audi's video.

The Audi video's director Peng Yangjun, who forwarded the video released by Audi's official Weibo account, removed all his Weibo postings on Monday and didn't respond to the controversy.

Peng, a photographer who is known for his "face-kini" series, founded Beijing Liangcang Culture Communication Co, which has produced promo videos for several automakers including Mercedes-Benz and BMW. It also has an online lifestyle sharing platform.

Netizens found another Peng promo video for BMW released last August that is very similar to a music video for English singer SOHN's song "Hard Liquor" in terms of both the musical composition and storyboard.

BMW China has yet to issue a response.

In an interview with music-video-creativity and industry news platform Promonews, Todorović said the video was shot in Serbia and features a performance by Croatian actor Dado.

"A line is not enough to symbolize the vector of one's life. I feel it's maybe better represented as a progression of circles that are chained together. So this video is about circles and lines, the past, present and future, regret, anger, despair...being lost in the tunnel of ones inner life and the physical labyrinth that surrounds us. In the end we face our own self, and we are led to dive deeper within," he told Promonews.