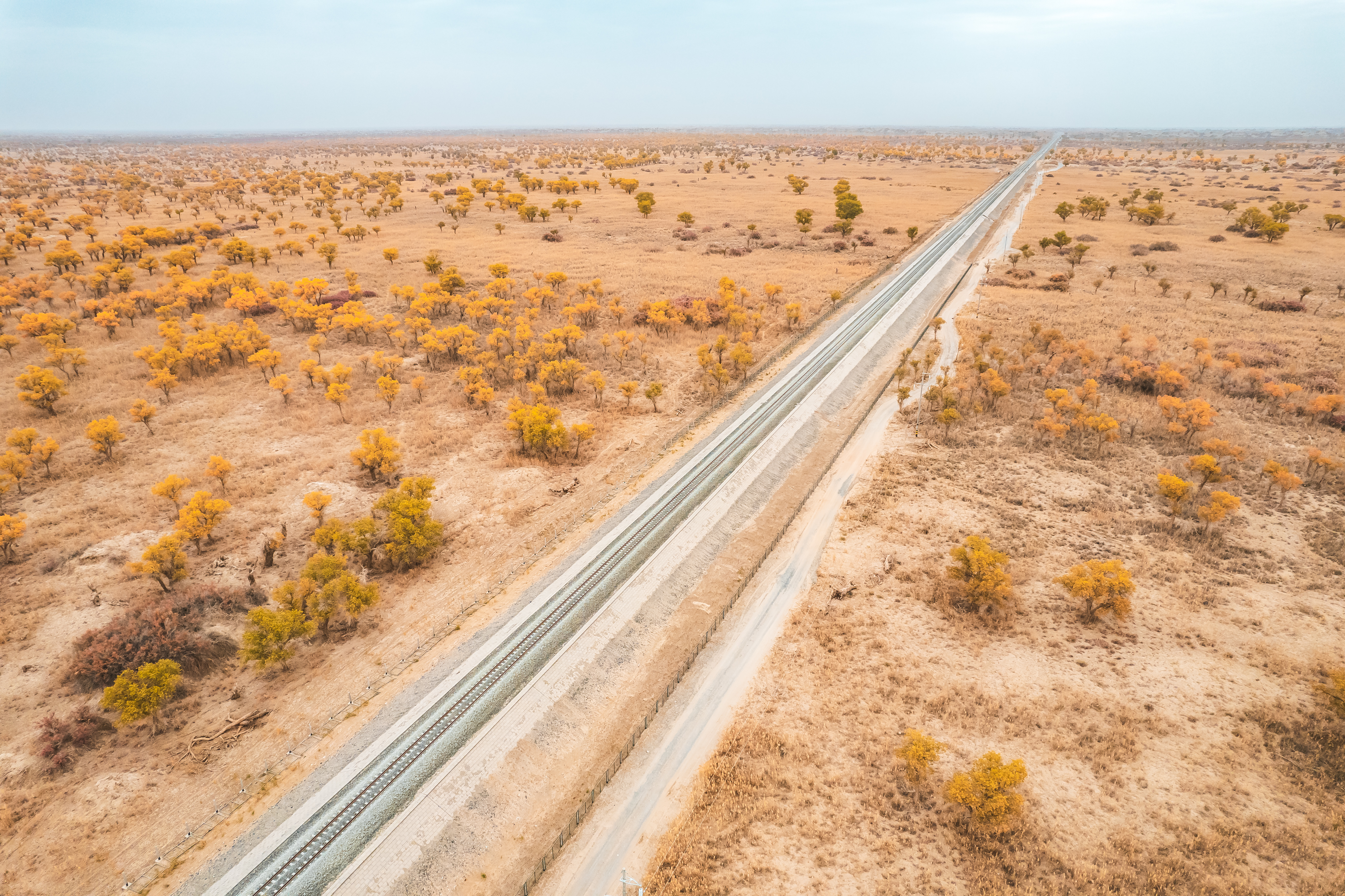 The 2,712-km loop, encircling the Taklimakan, China's largest desert, and linking major cities including Aksu, Kashgar, Hotan, and Korla along its route, is expected to put the development of Xinjiang, especially its southern part, on a faster track.

Last piece of the puzzle

The Taklimakan Desert rail loop line was completed after the new Hotan-Ruoqiang rail line was linked with the Ruoqiang-Korla section of the Golmud-Korla railway line, and the Korla-Kashgar and Kashgar-Hotan sections of the southern Xinjiang rail line.

The Hotan-Ruoqiang railroad stretches eastward from Hotan City to Ruoqiang County along the southern edge of the Taklimakan, the world's second-largest shifting-sand desert, with 65 percent of its length inside the desert. Its construction started in December 2018.

The newly opened line extends 825 km with a speed of 120 km per hour, and it has 22 stations, with 11 offering passenger service and six offering cargo service. Trains can cover the entire distance in 11 hours and 26 minutes.

The railway line runs through the southern edge of the Taklimakan Desert, and sandstorms in this region pose a serious threat to the railway. Anti-desertification programs were carried out simultaneously with railway construction, said Wang Jinzhong, Party chief of the construction contractor of the Hotan-Ruoqiang railway.

Five viaducts with a total length of 49.7 km lift the railroad to protect it against sandstorms. Meanwhile, a total of 50 million square meters of grass grids have been laid and 13 million trees, including rose willow and sea buckthorn, have been planted.

The green barrier of shrubs and trees not only guarantees the safe passage of the trains but also helps improve the local ecological system, Wang added.

The opening of this line, which is a key national railway project, has brought an end to the unavailability of train service in five counties and certain towns in southern Xinjiang and will shorten the travel time for locals, according to China Railway Urumqi Group Co., Ltd.

It will facilitate the transportation and logistics of Xinjiang specialties including cotton, walnuts, red dates, and minerals. It is also of great significance to driving resource development, safeguarding ethnic unity, consolidating frontier defense, and boosting rural vitalization along the route.

Selimhan Tursun was among the passengers on the first train. Hailing from a remote village in Qiemo County, she was ecstatic about her trip, as the journey was comfortable, economical, and convenient.

In the past, journeys from her home village were either bumpy bus trips that would take over 10 hours or expensive ones by plane, she recalled. "Many fellow villagers haven't even seen a train before, and I'll definitely take them for a train trip together."

Railway construction workers also benefited from the project. Dursun Mememin used to make a living by farming and raising sheep in Qiemo County.

While working at the railway construction site in Minfeng, a county along the Hotan-Ruoqiang railway, his income nearly doubled to 7,000 yuan a month (about 1,043 US dollars), he recalled.

"It's also delighting to build a railway for my hometown," Dursun Mememin said. "Trips to Urumqi have been reduced by more than eight hours, which will offer more opportunities to locals like me."

On top of expanding the railway network, the Hotan-Ruoqiang railway is also designed to boost the development of industries such as mining and tourism in the region, according to transportation authorities.

The rail loop around the Taklimakan Desert is the epitome of Xinjiang's transportation infrastructure development. Also on Thursday, an airport in the city of Alaer started operations. In April, Zhaosu Tianma Airport, the region's first plateau airport, was officially put into use.

With the third desert road to be opened to traffic in late June, Xinjiang will boast three roads that run through the Taklimakan. In addition, 8,151 kilometers of railways had been in operation by the end of 2021.

Since 2012, Xinjiang has experienced the best period for transportation development, according to the regional transport department. From 2016 to 2020, Xinjiang's fixed-asset investment in transportation exceeded the total of the previous 60 years, it said.

Behind all these numbers are Xinjiang's unremitting efforts to deliver tangible benefits to every single individual, be it on the plateau over 3,000 meters above sea level or in the isolated villages hidden in the center of the desert.

With longer roads and railways and more airports, Xinjiang is transforming from the edge of the transport network to a regional hub, said a regional transport department official.