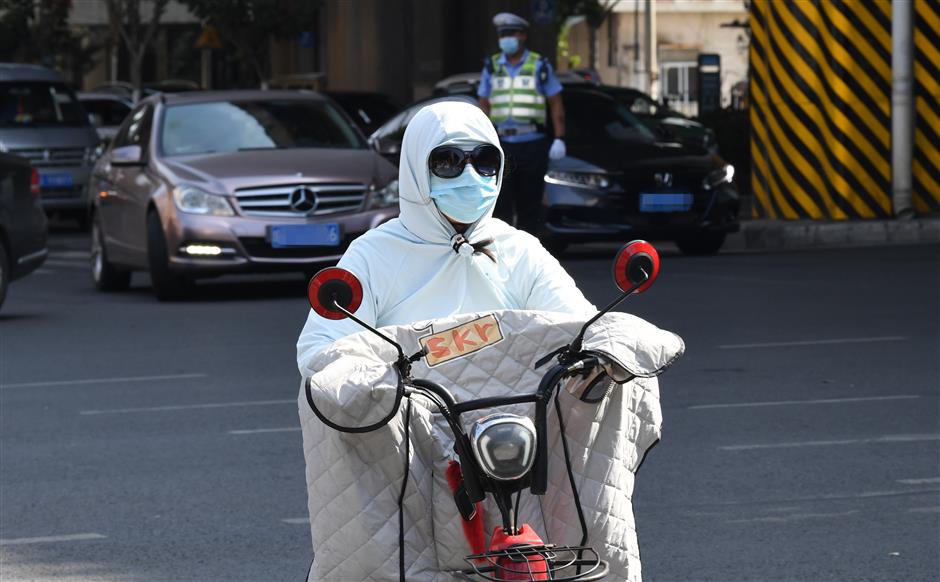 A woman is fully covered as she rides an electric bicycle in Hefei, Anhui Province, on Wednesday.

Deaths due to serious heatstroke have been reported in eastern and southwestern parts of China as the country bakes under record heat amid soaring temperatures.

West China Hospital of Sichuan University in Chengdu, capital of Sichuan Province, received three patients suffering from heatstroke on July 10 amid a blistering heatwave in the southwestern province over the past few days, Red Star News reported.

Eastern Zhejiang Province has seen similar patients, after issuing a record-breaking 51 red alerts, the highest of the three-tier warning system, for heat since Tuesday.

Lishui Central Hospital in Lishui City has admitted three patients with heatstroke in the past week, including a 70-year-old woman who developed a high fever and fuzzy consciousness while sleeping at home and arrived at the hospital with a body temperature of 42.5 degrees Celsius, Thepaper.cn reported.

A 49-year-old male factory worker died due to a serious heatstroke on July 8, the hospital said.

Heatstroke is mainly caused by high temperatures, humidity and intense physical activity. It commonly affects the elderly and disabled as well as people who exercise vigorously in summer.

On Tuesday, the maximum temperature soared to 37-39 degrees Celsius in parts of Sichuan, Jiangsu, Zhejiang, Fujian, Yunnan, Jiangxi, Hubei and Anhui provinces, and the cities of Chongqing and Shanghai.

In particular, the cities of Luzhou and Yibin in Sichuan and Zhaotong in Yunnan, as well as Shaoxing, Ningbo, Jiaxing and Huzhou in Zhejiang, and Changzhou and Wuxi in Jiangsu, hit temperatures of around 40 to 42 degrees Celsius.

Forecasters expect the intense heat to continue over the next several days.