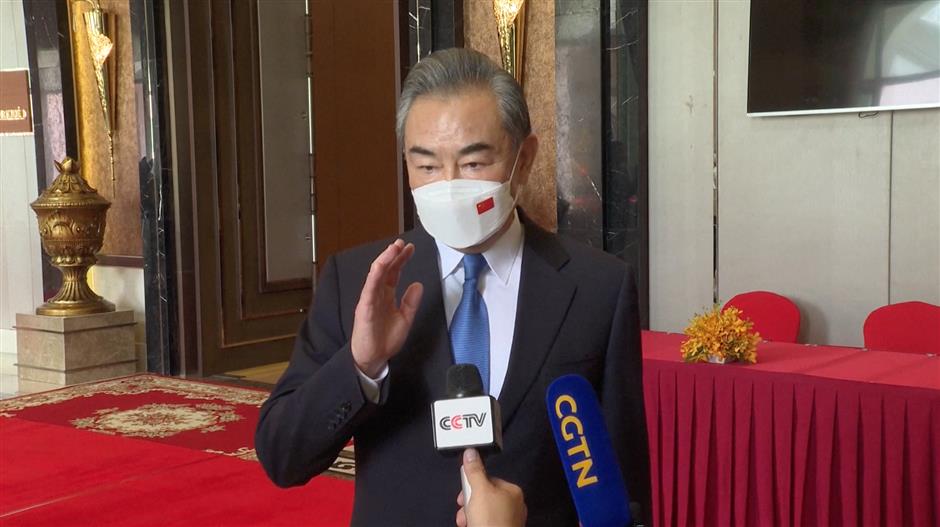 The ins and outs of the current tension over the Taiwan Strait are crystal clear, so are the rights and wrongs. It is the United States which started the trouble, created the crisis, and continuously escalated the tensions, Wang said on the sidelines of meetings of foreign ministers on East Asia cooperation.

"The flagrant provocation by the United States has set an egregious precedent. If it's not corrected and countered, will the principle of non-interference in internal affairs still exist? Will the international law still be upheld? How can the regional peace be safeguarded?" he asked.

Wang stressed that the statement of the G7 foreign ministers distorts facts and confounds right and wrong.

"Where did they get the right to groundlessly criticize China's reasonable and lawful measures for safeguarding its sovereignty and territorial integrity? Who granted them the authority? Isn't it absurd that the infringer is shielded whereas the defender is accused?" he asked.

Noting that the G7's wrongdoing has aroused great indignation among the Chinese people, Wang said the sovereignty and independence of China and other countries were earned through bloody battles fought by the people and should never be infringed upon again.

Today's China is no longer the China of the 19th century, and history should not and will not repeat itself, he stressed.

The international community should unequivocally oppose any act that challenges the one-China principle and resist all infringements on the sovereignty and territorial integrity of all countries, Wang said.

Regional countries should be more united against any hegemony bullying the region, he said, adding only in this way can regional countries truly safeguard their own security as well as regional peace and stability.