Binjiang District, a core urban area of Hangzhou with many high-tech companies and a favorable business environment, set a course for its future last week while celebrating the 10th anniversary of its establishment.

The government revealed that Binjiang will continue developing its digital economy industry, announcing supportive policies to realize its goals.

"The digital industry, along with high-end manufacturing, will be the 'twin engines' to drive the economy in the future," said Zheng Di, vice Party secretary of Binjiang District.

"By 2025, Binjiang is expected to have a 600-billion-yuan (US$84.6 billion) digital industry, accounting for 75 percent of the district's gross domestic product."

The added value from Binjiang's core digital economy last year amounted to 159.6 billion yuan. Enterprises in the fields of cloud computing, big data, information security and chip manufacturing have been lured to the district, including Hikvision, NetEase and Alibaba.

As the leading district in digital government management, Binjiang has showcased its expertise in building a smart economy through big data and artificial intelligence technology.

Seventy-five digital applications have been applied to harness the district's power, and 32 pilot units are still underway. Information can be shared conveniently across government departments through AI platforms, rendering daily work more effectively.

To ensure Binjiang becomes a leading labor market and innovation center in Hangzhou, its famous 5050 Plan includes subsidies of up to 1 million yuan for promising projects. So far, about 900 projects have been supported.

The district has also cooperated with prestigious universities to build graduate schools in a bid to grow its talent pool and establish a scientific innovation platform.

It is also providing an entrepreneurial fund for university students. Hangzhou Dianzi University, Tongji University and Xi'an Jiaotong University have officially collaborated with Binjiang to encourage technological innovation among students. 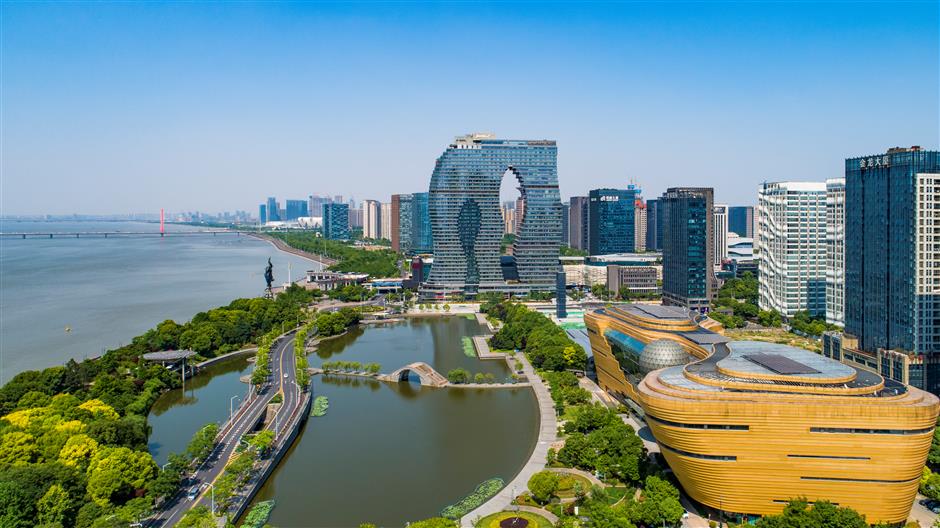 View of the Binjiang area along the Qiantang River

In its initiatives to ensure the supply of crucially needed talent, the district has upgraded facilities and infrastructure in industrial parks to attract more professionals from home and abroad.

So far, it has attracted over 490 professionals and accumulated more than 300,000 talent, coordinated with 5,000 startups and built 8,160 apartments for workers.

The district also has introduced an initiative called an "embedded nursery" which caters to working parents with babies who are 24 to 36 months old. The aim is to enable parents to continue working without having to worry about their kids.

"We are going to promote the 'embedded nursery' mode across Binjiang to relieve the burdens on working moms," said Zhang Dengfeng, Party secretary of Binjiang.

The district has used preferential rent and housing policies for some years to broaden the talent pool. These have benefited approximately 10,000 employees from over 600 businesses. Within three years, the number of affordable flats for talent is expected to reach 10,000.

Binjiang is striving to build an "olive-shaped" society typified by common prosperity.

By this it means a society with a large middle class, a small elite class and a small lower class, in which families with an annual income between 200,000 yuan and 600,000 yuan account for 50 percent.

With Hangzhou set to host the 19th Asian Games next year, the Olympic Sports Center Stadium, commonly known as the Big Lotus, is in Binjiang District.