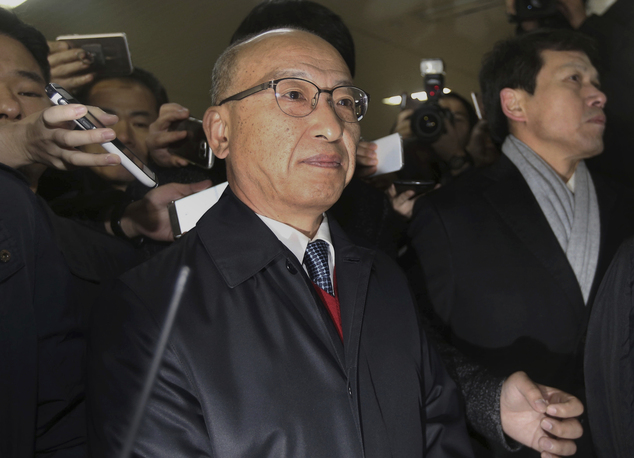 Park was sacked by the country's top court in March and is currently in prison and on trial over a wide-ranging corruption scandal involving bribes from top businesses like Samsung in exchange for policy favours.

"The fact that a health ministry official used pressure to damage the independence of the state pension fund is highly reproachable," the judges said after finding him guilty, according to the Yonhap news agency.

Moon, who served as health minister at the time of the merger, had previously admitted to the charges.

The court also sentenced a former official at the pension fund to two years and six months in jail for his involvement in the merger, and arrested him at the court after the trial.

The merger between Cheil Industries and Samsung C&amp;T was seen as a key step to ensure a smooth father-to-son power transfer to Lee Jae-Yong, scion of Samsung's founding family.

The deal was opposed by many shareholders who said it had wilfully undervalued Samsung C&amp;T stock.?But it eventually went through after the NPS -- a major Samsung shareholder -- approved it.

Prosecutors argued that Moon had received orders from then-president Park to back the controversial merger.

Lee is in prison and currently on trial.

"This is bad news for both Park and Lee Jae-Yong," Kim Jun-Woo at the Lawyers for a Democratic Society told AFP.

"The fact that the former minister Moon has been convicted of pressuring the national pension fund to support the merger is a serious blow to Park as Moon must have done so from a direction from the presidential Blue House," he said.

That pension fund official Hong was found guilty is a "considerable blow" to Lee's defence, he added.

Lee, who was arrested in February, has been charged with offering nearly $40 million to the now-ousted president and her close friend Choi Soon-Sil, allegedly as bribes.

Park faces 18 charges including bribery, coercion and abuse of power for offering policy favours to tycoons who bribed her secret confidante Choi.

The scandal has cast a renewed light on the cosy ties traditionally enjoyed by the government and the family-controlled conglomerates known as "chaebols" that dominate the country's economy.

Millions of South Koreans who took part in weekly street rallies demanding Park's removal have also called for the arrest of the tycoons involved in the scandal, including the leaders of Hyundai, SK and Lotte.