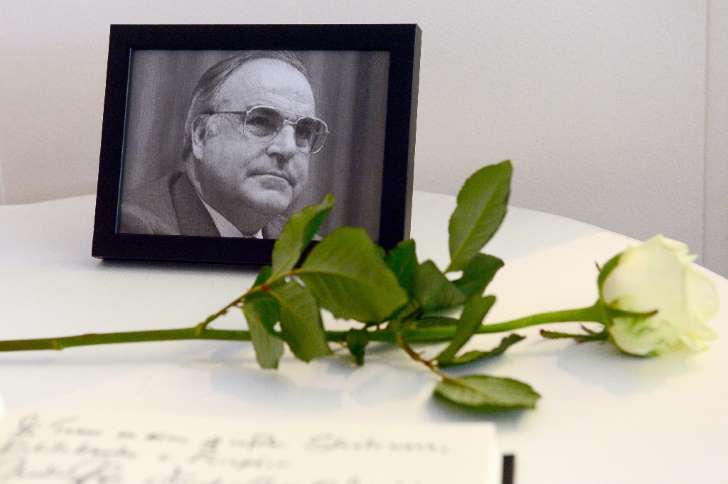 Helmut Kohl was the "chancellor of German unity" but a week after his death, a family spat has cast a glaring spotlight on deep divisions and a looming battle over his legacy.

A long-running feud between Kohl's widow and his two adult sons from a previous marriage reached a new low when she denied one of them entry to his childhood home to pay his respects Wednesday.

Both sides have since traded angry recriminations that threaten to overshadow the mourning period for one of Europe's great statesmen, who died last Friday aged 87.

Der Spiegel weekly meanwhile reported that Kohl's widow, Maike Kohl-Richter, who was 34 years his junior, had planned to bar Chancellor Angela Merkel from speaking at the funeral of her political mentor.

This would reflect the bitterness over what Kohl saw as Merkel's betrayal which launched her own meteoric career -- when she turned against him in 1999 over a campaign finance scandal.

Kohl-Richter told Merkel last Friday, according to Der Spiegel, that she would invite as a speaker Hungary's hardline Prime Minister Viktor Orban, who has harshly attacked Merkel's liberal refugee policies.

The matter has been resolved, and Merkel is now set to address the July 1 service in Strasbourg, along with European Commission President Jean-Claude Juncker, French President Emmanuel Macron and former US president Bill Clinton.

Parliamentary Speaker Norbert Lammert said pointedly that "with all due respect, the way and the place in which this outstanding political lifetime achievement ... is honoured are more than a family affair".

- 'Petty egoism, arrogance' -Kohl is hailed as the father of Germany's 1990 reunification, having convinced Western partners and Russia's Mikhail Gorbachev that Germany's capitalist west and communist east must become one nation again.

Germany's longest serving post-war leader, in office from 1982-98, was also a founding architect of the European project and championed reconciliation with France, its partner at the core of the EU.

However, Kohl's personal life was also marked by tragedy. His first wife Hannelore committed suicide in 2001, having spent years indoors because of a rare light allergy.

Later, in retirement, Kohl suffered a fall in 2008 and sustained a serious head injury that left him using a wheelchair, and his speech slurred.

While in a rehabilitation clinic he married Maike, a former chancellery speech-writer and his partner of recent years, at the age of 78.

His sons, Walter and Peter, were not invited to the ceremony.

They, former friends and biographers have since charged that Kohl's second wife -- seen to hero-worship the political giant -- also jealously isolated him.

Walter Kohl said he learnt of his father's death on the radio. The last time they had talked, by telephone, had been in 2011.

When he visited the family house with Kohl's two grandchildren Wednesday, a police officer told him they had been asked to leave.

In a statement to media, he said he was outraged by Kohl-Richer's "tasteless behaviour". Her lawyer rejected the blame, charging Walter had missed an earlier telephone appointment -- a claim he called a "lie".

With Kohl dead, more trouble may loom, focused on the thousands of files from Kohl's marathon term in office.

The historical papers are in the hands of Kohl-Richter, who would have to consent to their release to an archive or foundation.

Der Spiegel predicted that "the dispute over the legacy of the veteran party chief has begun".

The Passauer Neue Presse daily said the struggles also reflected poorly on Kohl himself, suspecting that the power player may have wanted to settle old scores.

Whatever the truth, the newspaper judged that the funeral preparations were turning "grotesque" and warned all sides "not to tarnish the memory of a historical figure with petty egoism and arrogance."