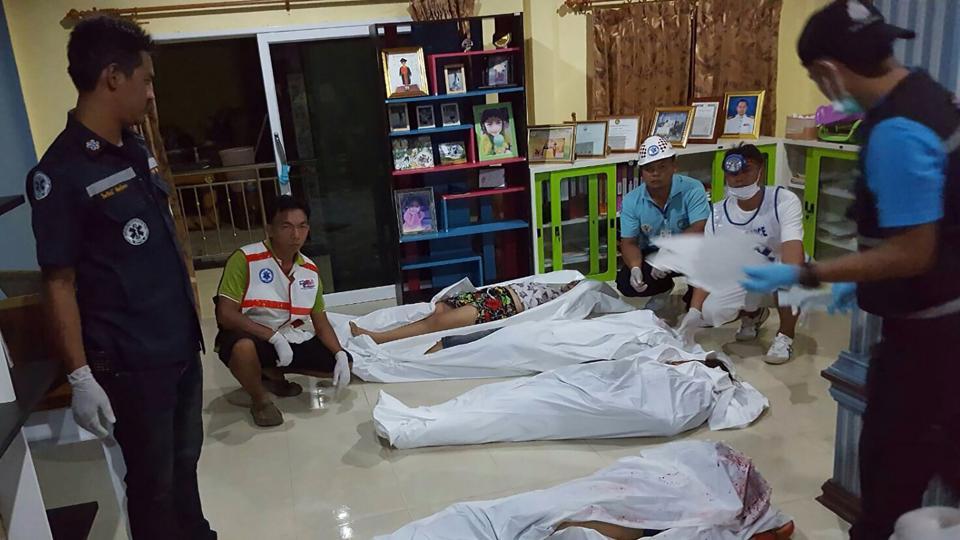 Rescue workers stand beside the bodies of victims of a shooting at a residence in the southern Thai province of Krabi.

A group of gunmen barged into the home of a local official in southern Thailand and killed eight members of his family, including three children, by shooting them in the head, police said Tuesday.

Gen. Worawit Panprung, police chief of Krabi province, told reporters he believed the killings involved a dispute over land or political issues, but an investigation was ongoing.

Six or seven armed men dressed in clothes resembling official uniforms entered the home of Worayuth Sanglhung, a village headman in Krabi province, on Monday evening, police spokesman Krissana Pattanacharoen said. They held the 11 residents captive until around midnight, when they shot them in the head before escaping.

Three of the dead were girls under 15 years of age, with the youngest 8.

Three people survived but were seriously injured. Krissana said one was able to provide details about the attack.

Police said the dead included Worayuth, who also used his home as his office. Village headmen are influential figures in their communities.

Land disputes in Thailand sometimes take a violent turn, and there have been several high-profile murders related to land rights in the country in recent years. In 2014 and 2015 in Krabi, at least two people were shot dead in what were suspected to be disputes over land used for oil palm plantations. Usually individuals are targeted.

Land values in parts of Krabi have climbed in recent years because the coastal province is popular with Thai and foreign tourists.

Chaiwut Buathong, head of Ao Luek District where the killings took place, said the survivors were lucky that the bullets did not penetrate their skulls. He said the killings did not appear to be related to a Muslim separatist insurgency further south in Thailand.

"We don't really know the reason behind that cruel act," said Namas Chooburt, head of local administration for Ban Klang sub district. "It's just too gruesome to guess what is the cause."