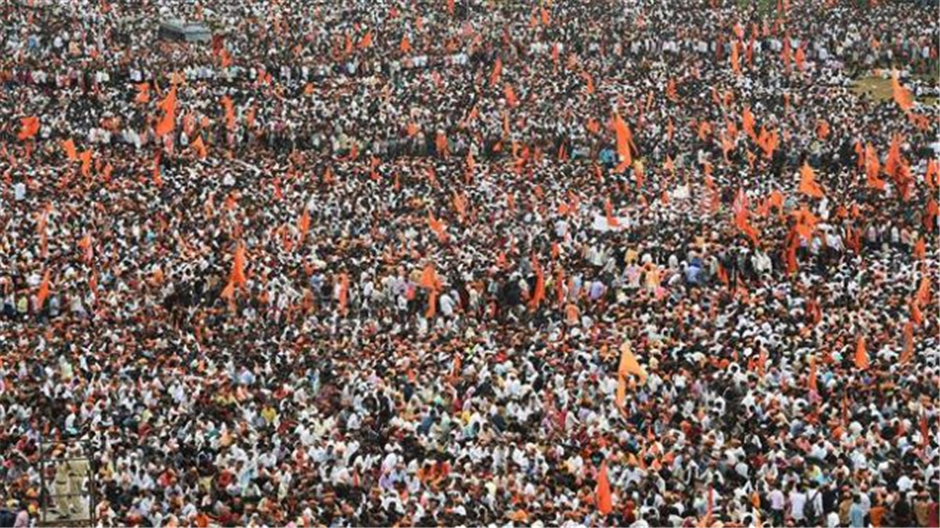 An estimated 200,000 protesters brought India's financial capital Mumbai to a halt Wednesday as they demanded set quotas for government jobs and colleges amid unemployment and reduced farm incomes.

Many businesses in the southern part of Mumbai were closed and traffic was diverted as the protesters, largely from rural areas of western Maharashtra state, descended on the bustling capital in a sea of saffron flags and banners.

A spokesperson from Mumbai police told AFP an estimated 200,000 people participated in the march, which brought rail and roads to a standstill as protesters from the Maratha community pressed their demands.

"We want reservations for the Maratha community in government jobs, educational institutes, and better farm loan waivers," Bhaiya Patil, one of the organisers told AFP.

In June, the government in Maharashtra agreed to write off loans to farmers estimated to be worth nearly $5 billion after 11 days of protests that strangled supplies to Mumbai.

Maharashtra is one of?several largely agricultural Indian states that have suffered disappointing rains and crop failures in recent years.

More than 1,417 farmers killed themselves in Maharashtra in 2016, according to official figures.

Demands for quotas for highly sought-after government jobs and university places have escalated as unemployment has risen and conditions in rural areas worsened.

India reserves places for lower castes to try to bring victims of the country's worst discrimination into the mainstream, but the policy causes resentment among other communities, who say it freezes them out.

Maharashtra's Chief Minister Devendra Fadnavis responded Wednesday with a promise for "regular interaction" with the Maratha community through a committee.

India has nearly 260 million farmers and farm labourers and over half the population lives in rural areas, but agriculture accounts for just 17 percent of its gross domestic product.

Farmers around the country have been pressing for more government assistance, often through protests.